451 Research found in a survey that Microsoft Azure appeal was up from 22% to 35% of respondents in two years.

Numerous polls have indicated a steady degree of IT interest in moving part of data center operations into either a public or private cloud infrastructure. A recent 451 Research poll casts that interest in more direct terms: a "moderate" or "significant" transformation of IT environments into public cloud infrastructure will be "a business requirement" over the next five years, according to 80% of those surveyed.

In a description of what that transformation will look like, a summary sent to InformationWeek said respondents reported that workloads will be migrated into a cloud setting and the amount of spending behind that move will have to continue to increase. But there's still a question where that spending will occur. It's not necessarily all going to Amazon Web Services.

Only 22% said they were cloud-first organizations at this point, with new applications either coming out of the cloud as software as a service or developed to run in a cloud environment. Infrastructure as a service remains the cloud model being adopted at the fastest rate. 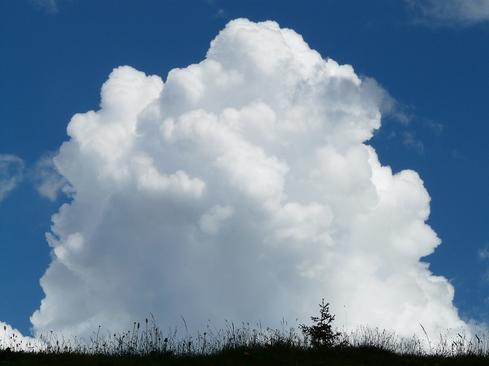 In the Web-based survey of 700 IT and cloud-decision makers, plus 20 follow-up, in-depth interviews, 451 Research found respondents concerned with how much cloud suppliers will be able to help them with their transformation. It also found Amazon Web Services may be losing its mantle as not only the largest cloud service provider but also the one providing the most bang for the buck. As AWS bills mount, users are becoming convinced that Microsoft Azure and the Google Cloud Platform represent equal or greater value.

"Respondents indicated concern about service providers' perceived ability to align IT and business requirements, not that there is scope for better understanding of the customers' businesses to support IT service delivery," a summary of the report stated. A subscription is required to view the full report.

"As organizations implement IT transformation in earnest, they are increasingly relying on strategic partners for operational assistance," said Melanie Posey, lead analyst for 451 Research's Voice of the Enterprise: Cloud Transformation survey in the first quarter of 2017.

Part of the survey, the Vendor Window, asked respondents to rate cloud providers based on their advertised capabilities or "promises" versus their "fulfillment." AWS came out ahead overall with its broad range of capabilities and services and frequent additions to them. The survey showed 55.8% of respondents get their infrastructure as a service from Amazon.

For the first time, however, AWS' customer ratings fell below Google Cloud Platform, when it comes to "value for money/cost." AWS has tried to keep the air of the price leader through frequently touted, selective, price cuts. The Google Cloud got high marks for service reliability and was rated the highest in "understands my business." The summary report didn’t specify why it moved into the top spot, but Google has lately been focused on adding easy to use analytics and machine learning services to its platform.

Likewise, both Microsoft Azure and IBM SoftLayer rated higher than Amazon on "value for money/cost" and "understands my business," according to Posey.

Amazon remains the most widely used and "most important" service provider for 39% of the respondents. Microsoft Azure moved up to 35% from 20.2% in the previous survey conducted in the first quarter of 2015.

"Many organizations use multiple IaaS providers and Microsoft Azure is emerging as a formidable challenger, closing the market adoption gap with AWS," concluded the summary. On a percentage basis, Google and Microsoft show "higher overall adoption rates" since the previous survey in 2015. 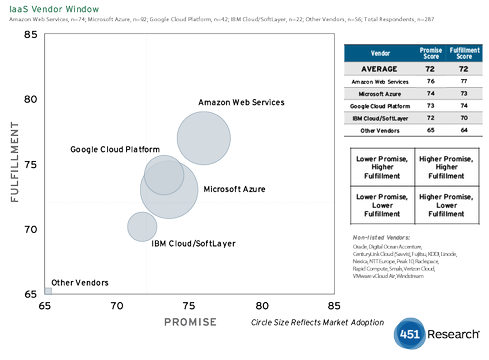 Microsoft is slated to release Azure Stack, currently in technical preview, in mid-2017. Azure Stack is a software stack that will allow customers to create on-premises under Windows Server a private cloud operation compatible with Azure.

Microsoft said on April 6 that the stack will include the capability to create Azure Functions, Microsoft's answer to AWS' Lambda service used in creating "serverless" applications. The software of course runs on servers, but the need to know about or scale those servers is handled operationally by the cloud, not by the developer of the application.

Microsoft also said on April 6 that it will integrate Azure App Service into Azure Stack. It's a set of tools for building cloud-based apps and includes MySQL and Azure SQL database services. “It will be interesting to assess the impact of Azure Stack (scheduled for launch by mid-2017) on Microsoft’s overall positioning and individual attribute ratings for multi-cloud/hybrid support,” Posey said.

Microsoft has also tried to acknowledge European concerns over data sovereignty by opening additional cloud data centers in Europe, a practice that's being followed by Amazon as well. Among European responders, Microsoft was the primary IaaS provider at 43.7% to AWS' 32%.

Microsoft has Azure data centers in Dublin, Ireland, the UK, Germany and France; and one in Amsterdam, the Netherlands, which it labels "West Europe" on its data center map. Microsoft has been prolific data center builder and claims 34 Azure regions worldwide.

In Europe, Amazon has AWS data centers with multiple availability zones in Dublin, London, and Frankfurt, Germany. It will add a multi-zone cloud data center in France in 2017 and one in Stockholm, Sweden in 2018. It currently operates multiple-zone data center complexes in 16 regions around the world.

Charles Babcock is an editor-at-large for InformationWeek and author of Management Strategies for the Cloud Revolution, a McGraw-Hill book. He is the former editor-in-chief of Digital News, former software editor of Computerworld and former technology editor of Interactive ... View Full Bio
We welcome your comments on this topic on our social media channels, or [contact us directly] with questions about the site.
Comment  |
Email This  |
Print  |
RSS
More Insights
Webcasts
Detecting and Preventing Insider Data Leaks
Nip Ransomware in the FUD: Detecting Attacks Pre-Encryption
More Webcasts
White Papers
Sunburst: Impact and Timeline
4 Steps to Achieving Comprehensive Kubernetes Security
More White Papers
Reports
Assessing Cybersecurity Risk in Todays Enterprises
Special Report: Edge Computing: An IT Platform for the New Enterprise
More Reports

With so much of the enterprise data center filled with Windows Servers, the Azure cloud was sure to grow in importance and continues to do so. The surprise here is how the Google Cloud Platform has turned around its image of being enterprise indifferent or enterprise aloof. It's doing something, probably easy access to solid analytics, that users like.
Reply  |  Post Message  |  Messages List  |  Start a Board