Cisco's Q4 earnings beat analyst estimates, but company plans to lay off 8% of its workforce.

Cisco on Wednesday announced earnings for its fiscal fourth quarter that exceeded analyst expectations, but the news was still decidedly mixed, as CEO John Chambers announced plans to layoff 6,000 workers -- 8% of the company’s global workforce.

In a conference call with analysts, Chambers said Cisco is driving growth in many of its most promising product areas, including cloud, security, and software offerings. But he said the company continues to face "a tough environment" in emerging geographic markets and warned that business there might get worse over the next few quarters.

During the quarter, which ended July 26, Cisco recorded $12.36 billion in revenue, down slightly year-over-year, and $2.25 billion in net income, which was basically flat. The profit translated to 55 cents per share. Analysts had expected 53 cents per share, according to a survey conducted by Thomson Reuters. Cisco also outperformed analysts' revenue expectation of $12.14 billion. For the full year, Cisco took in $47.14 billion in revenue, down 3% compared to its fiscal 2013. Earnings per share for the year were up 2% on a non-GAAP basis, to $2.06.

The 6,000 job cuts are only the latest in a string of reductions at Cisco; prior to the latest announcement, the company had already laid off twice that many workers over the past few years. Chambers characterized the layoffs as a "limited restructuring." The company did not specify where the cuts would be made. He said savings from the eliminated jobs will be invested in projects with high growth potential, such as security and cloud products, and the Internet of Everything.

Chambers said that due to restructuring, Cisco will take a pre-tax charge of $700 million during fiscal 2015, with up to $350 million coming in the first quarter. He also estimated that revenue would be flat or modestly up in the first quarter, but that earnings would fall. 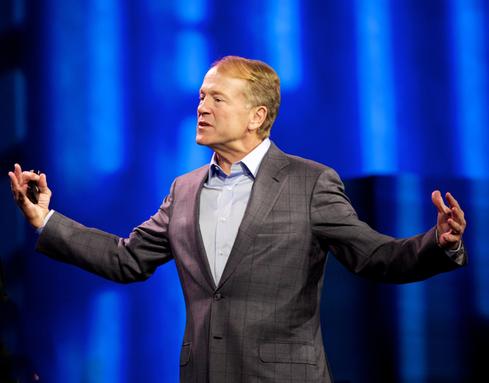 Cisco, whose financial performances have long been considered a bellwether for tech spending, has faced a number of challenges over the last year. Chambers argues that Cisco's integrated hardware-software offerings provide best-in-class performance, but more companies are embracing software-defined networks built on low-cost commodity hardware, for example. Cisco remains a major tech player, but with these software-savvy competitors gaining more traction, Chambers has faced pressure to adapt while maintaining healthy margins.

In fact, some of Cisco's large customers, including Goldman Sachs, Verizon, and Coca-Cola, told the Bloomberg news service earlier this month that they will reduce their business with Cisco if it doesn't enhance its software offerings.

Cisco also faces ongoing concerns that NSA surveillance programs have compromised the company's gear. When an alleged photo of NSA agents intercepting Cisco gear emerged earlier this year, Chambers told us his company has never shared its code with the government and did not install backdoors for government surveillance. Shortly thereafter, in a letter to President Obama, he urged the White House to rein in NSA overreach.

Political overtones could certainly help explain Cisco's rough quarter in China, where revenue was down more than 20%. Sales in South America and Latin America were also weak.

But it's not all challenges and disruption for Cisco. The company's stock is up more than 14% so far this year. Some of its SDN-oriented products, such as its Nexus 9000 switches and APIC controller, are generating positive buzz. Additionally, Chambers remains bullish on most of his favorite talking points from the last year, including the Internet of Everything, and, more recently, Intercloud.

Chambers has also repeatedly talked up his company's shifting investment in software. He has said that as much as 85% of Cisco engineers are now working on software projects.

Still, if Cisco succeeds in reinventing itself, it remains to be seen if Chambers, who turns 65 this month, will still be CEO when the company gets there. In 2012, he said he planned to retire in the next two to four years, and based on recent rumors, he might step down sooner rather than later-- as soon as this fall, according to some reports.

Michael Endler joined InformationWeek as an associate editor in 2012. He previously worked in talent representation in the entertainment industry, as a freelance copywriter and photojournalist, and as a teacher. Michael earned a BA in English from Stanford University in 2005 ... View Full Bio
We welcome your comments on this topic on our social media channels, or [contact us directly] with questions about the site.
Comment  |
Email This  |
Print  |
RSS
More Insights
Webcasts
Building Asset Management into Your Enterprise Security Strategy
Cybersecurity Risk Management
More Webcasts
White Papers
Gartner: Hype Cycle for Security Operations
Smart Service Management: Working Better Together with a Connected Enterprise
More White Papers
Reports
The State of Endpoint Security
Immuta Data Engineering Survey: 2021 Impact Report
More Reports

"Give it a few more quarters and watch the tech sector start asking for bailout to cover the damage that overzealous spying has done to US industry."

A secure way to move information (including data from devices) between different clouds would certainly be useful in the new IoT landscape. That said, I get the feeling that not all Cisco partners and customers really know what Intercloud is, or what it can do for them. Seems like a product that Cisco is still figuring out how to market.
Reply  |  Post Message  |  Messages List  |  Start a Board

I had the same thought; when tech CEOs use the word "limited," they define it on their own terms.

I remember back when Nortel was the biggest networking company -- it laid off more than 90,000 people in a very short time (like 18 months, I think). That was scary.
Reply  |  Post Message  |  Messages List  |  Start a Board

Whether or not Cisco ever cooperated with the government to compromise its equipment, the NSA's reported habit of intercepting routers en route to customers is probably enough to prevent the company from ever selling in China again. Give it a few more quarters and watch the tech sector start asking for bailout to cover the damage that overzealous spying has done to US industry.
Reply  |  Post Message  |  Messages List  |  Start a Board

"Limited restructuring"? What's limited about nearly 10% of your workforce? Maybe he was comparing it to Microsoft's less limited layoff of 18,000.
Reply  |  Post Message  |  Messages List  |  Start a Board
InformationWeek Is Getting an Upgrade!