At AWS ReInvent, Werner Vogels looks back on how Amazon Web Services got to where it is, and where it's going next.

Amazon CTO Werner Vogels is still a commanding figure on the stage at AWS ReInvent customer and developer conference, gesturing emphatically, intoning cloud axioms with an unselfconscious hint of a Dutch accent and sounding more authoritative because of it.

That he believes in what he's doing and remains the guiding hand behind Amazon Web Services' rapid development of new services few would doubt.

The cloud is not just a business but a social good. "The cloud has completely democratized access to IT resources. Everybody has access to the same scale of compute, storage and networking," he starts out. Established companies with their big data centers have much less of an inherent advantage; a startup with a good idea can launch it and support it for a large customer base quickly, still paying only for the computing they use. 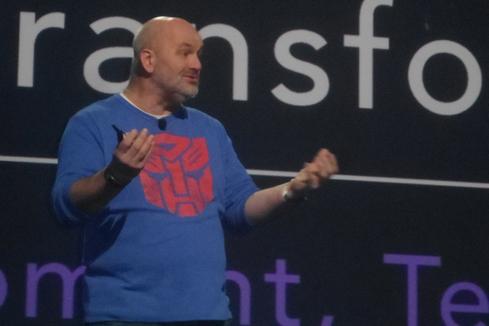 On another point, "Data is the competitive differentiator. The quality of data and the questions you are able to ask of the data have become the major differentiator among companies. Amazon is offering the broadest set of analytic services of any cloud provider," Vogels said in his December 1 keynote address .

The announcements at this year's ReInvent in Las Vegas Nov. 28-Dec. 2 support that claim. AWS is striving to offer not only more analytic services but simpler to use services. Vogels championed Amazon Athena, unveiled Nov. 30 during an Executive VP Andy Jassy keynote, as one of them, not just because users can submit an SQL query to a large data set but because the data resides where it probably was originally stored in the first place, on AWS' Simple Storage Serevice or S3.

That means there's no front end work of setting up an analytics system on a server, unloading data from one receptacle and loading it into a data lake, data warehouse or other analytics system in the cloud. If you're an Amazon customer, Athena will find it and run queries against it as soon as the query submitter can define a schema. (Business analysts often have the skill of defining the rows and columns of a table. If the income levels of customers is the information sought, the schema defines the relationship of the data sets and allows the system to build the table.)

For business analysts, database administrators and even data scientists, a large chunk of work has been removed and direct access by query granted to the data. Time can be spent on formulating queries, inspecting results and trying again. Athena is an always-on service requiring no set up or maintenance by the user.

In a sit-down discussion after the keynote, he's as voluble in person as he appears on the stage, taking a question and running with it for three, four or five minutes at a time without stopping. He shrugs and warns, "If you don't interrupt me, I'm just going to keep talking."

So one by one, fresh questions get inserted into the flow. And it's something like trying to interrupt a torrent.

Want to see how Amazon Web Services has changed in the ten-plus years since its loss? Read Amazon Cloud Turns 10: How It's Changed.

In some ways, Amazon Web Services was just getting recognized as a potential game changer when the 2008 recession hit. EC2 infrastructure with the Simple Storage Service first appeared March 13, 2006. "The economic model was radically different. The cloud was based on solid economic principles that weren't commonly used in IT," Vogels noted, especially the cloud's core, pay-only-for-what-you-use principal. IT managers were used to upfront lifetime licensing costs for software, regardless of whether it got used or not. IT managers were spurred to greater use of AWS than they might have been inclined to do otherwise because "the recession of 2008 took all the capital out of the market."

Amazon took the route of charging by the hour because it was a heavily developer-oriented company itself, and it was offering services that it knew developers could use. "Things in the early days seemed obvious to us because we were developer focused." Because of the recession, companies were trying to innovate more quickly. "Companies need to become more agile and do it at the lowest risk possible," he said. In other words, what the economy was doing to companies and what Amazon was allowing them to do "worked in parallel and amplified each other."

In the early days, that assumed developer audience lead Amazon to offer service APIs and not spend much time explaining what an API was. Developers just knew. As AWS got better established in the enterprise, Vogels could sense "we needed to shift our emphasis to be more educational. We needed a closer relationship with the customer…" to understand their compliance requirements and the kind of data they wished to send to Amazon.

Carrying out his opening keynote theme, Vogels dwelled on the "democratization of IT" for startups, pointing out the example of Coins.ph, an online bank that handles transfers from emigrant workers sending back home to the Philippines. Commercial banks charged 8% to make the transfers. Coins.ph charges 3% and allows subscribers to make direct payment for 70 different types of bills run up by families back home.

"All banks realize that the Internet has become a distribution channel (for bank services). Many banks want to become more customer-centric," he noted, and not miss out on the evolving digital economy.

As the CTO of the pre-cloud, Amazon.com, Vogels remembers what it's like to be confronted with a multi-year, upfront software license that he's not entirely sure he needs. "When I bought a database system, I anticipated five years of usage and put it into the license. It's very hard to anticipate that far ahead," and not end up over-provisioning, he said.

"You buy 25-30% more with the license than what you need because no one wants to be caught in a situation where they're under-provisioned," he said.

As AWS built up a head of steam, Vogels said its executive staff always kept in mind the 2003 Harvard Business Review article by Nicholas Carr, IT Doesn't Matter.

It's goal was to allow IT to do the thing that do matter to the business, while AWS supplied the infrastructure and services that were essentially neutral in their competitive advantage to the company. "We focused on that. What are the things that are not competitive pain points," he said. During his keynote, he recalled, "I once jokingly said, 'We're in the business of pain management.' "

The Amazon Lambda service, which allows an application software event to trigger the calling up of a present function or process, was meant to address one pain point that had crept into the cloud. IT needed to be able to respond to customers needs when they occurred, and for that reason kept virtual servers running in the cloud at all times, ready to respond to an event trigger. Lambda eliminated the need for those 24-hour a day servers and substituted instead temporary services that came to life only when they were actually needed.

"It's one of those simple things," said Vogels. "Lots of companies (before Lambda) had to run significant EC2 capacity for events they could not predict… With Lambda, they run the functions only when the files arrive. Quite a few of our enterprise customers realized they were in that situation…" he said.

For really big events, Amazon can scale up to meet the demand automatically. "Do you need 10,000 servers running in parallel? We'll do it for you. It takes away a level of headache (for IT)," he said.

Likewise, with AWS managing the infrastructure needed for dev and test, the cost timewise for developers not needing to manage their own infrastructure goes from 75% of what they do down to 25%. That leaves a lot more time for code development, he said.

AWS' immediate and long term goal is to put the tools into the hands of developers that make it more likely they'll do their work in the cloud and deploy to the cloud. "We want to integrate Amazon Lex , Amazon Rekognition into the development process" so developers can use image analysis or natural language translation without thinking about it.

When he said that to a developer group, "I could almost see the brains go spinning. 'I can do new things with this." One bank said it wanted to use Rekognition to use (customer) faces as an authentication mechanism," he said.

Amazon is attracting IT users, in part by offering substitute infrastructure at a competitive price. But it's also attracting them by offering services on servers that they do not have to set up, patch or maintain. The idea of "serverless applications" that tap different resources in the cloud and stitch them together is an AWS idea to give IT some things it didn't know it needed, ease their initial adoption, and then see if IT can live without them. On Vogel's watch, AWS is both serving IT and changing the face of it at a very rapid pace.

Charles Babcock is an editor-at-large for InformationWeek and author of Management Strategies for the Cloud Revolution, a McGraw-Hill book. He is the former editor-in-chief of Digital News, former software editor of Computerworld and former technology editor of Interactive ... View Full Bio
We welcome your comments on this topic on our social media channels, or [contact us directly] with questions about the site.
Comment  |
Email This  |
Print  |
RSS
More Insights
Webcasts
Building Asset Management into Your Enterprise Security Strategy
Managing a Hybrid Cloud Infrastructure
More Webcasts
White Papers
5 Reasons to Protect your VPN with Multi-Factor Authentication
2021 Application Security Statistics Report Vol.2
More White Papers
Reports
Are We Cyber-Resilient? The Key Question Every Organization Must Answer
2021 Top Enterprise IT Trends - Network Computing
More Reports
Copyright © 2021 UBM Electronics, A UBM company, All rights reserved. Privacy Policy | Terms of Service