Aligned Data Centers has a data center in Plano, Texas, that provisions a custom network to match an application.

Aligned Data Centers, a colocation provider building modern data centers, has teamed up with an application-defined networking specialist, Plexxi. Together, the two firms are integrating compute and software-defined networking into a combined service that automatically matches networking resources to the workload.

With application-defined networking, each application is automatically assessed for its networking needs and given a customized virtual network that reflects its operational priority status, its capacity needs, and its required level of security.

That's not how it works in today's public cloud.

There, the user gets an assigned network based either on a manual selection from a checklist or on the cloud provider's assignment of network resources that accompanies the selection of a virtual CPU. The idea that a software-defined network can be right-sized to the application is one that is being pioneered in Aligned Data Centers. 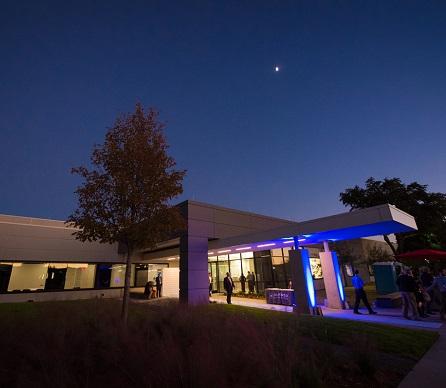 Aligned has construction "well underway" on a second, massive 550,000 square-foot colocation facility, one of the largest data centers in the Phoenix area, a region rich in varied data center facilities. It has plans for four more in Chicago, Northern California, Northern Virginia, and New Jersey, outside of New York City.

An Aligned colocation facility doesn't operate in the same way that initial colocation did previously, where the customer wheeled in his or her own servers to be placed in a cage. At Aligned, a customer can order the use of integrated pods of compute and networking, as needed, all supplied by Aligned.

The average enterprise data center runs a PUE around 2.0, consuming an equal amount of power in running the building and facility systems to that used in computing.

At an Aligned colocation site, customers are charged on a consumption-based model -- the number of server hours run and electricity consumed, not a continuous use contract that might run for months or years. Capacities in the pod can be expanded, or more pods ordered, as needed. That is, Aligned is trying to bring several public cloud principles to the operation of colocation space.

The approach will save a customer 30% to 50% of normal colocation data center costs, according to Bloomberg.

The pods are produced by Aligned Data Centers' parent company, Aligned Energy. The integration of application-defined networking is being supplier by partner, Plexxi, of Nashua, N.H., a Google Ventures-backed company (now GV).

[Want to see how a Facebook PUE measures up? Read Facebook's Data Center: Where Likes Live.]

The application-defined networking is meant to give customers a chance to pay for what they use and not be forced to overprovision their workloads with extra CPU and networking to meet all contingencies, according to Jakob Carnemark, CEO of Aligned Energy.

"Our partnership (with Plexxi) allows customers to provision infrastructure capacity to align with application needs, significantly reducing stranded capacity and improving speed," he wrote in the July 6 announcement.

Stranded capacity, where an application sits on a continuously running server but is infrequently used or sometimes barely used at all, will be addressed and eliminated in the Aligned Data Center approach, Carnemark noted. Stranded capacity is a culprit in data center inefficiency. It's sometimes thought to constitute as much as 50% of enterprise facility. This Anthesis Group report, which the firm released about a year ago, found that 30% of the typical data center servers are "comatose," or sitting unused over a six-month period.

Plexxi CEO Rich Napolitano wrote in the announcement that the partnership has built "the world's first true application-defined data center from top to bottom." Its facilities "adjust based on customer application requirements and densities," for such things as compute, networking, power, cooling, and space. That substitutes a right-sized operating cost to the customer's needs instead of an outsize capital cost going into more permanent data center space, he said.

At its upcoming Phoenix data center, Aligned has built a "next generation micro-grid" into the substation supplying power to the 550,000 square foot facility. The substation receives power from four lines supplied by three different sources. If one line failes, the other lines automatically pick up the slack. That's one way to build power reliability into a modern site.
Reply  |  Post Message  |  Messages List  |  Start a Board
InformationWeek Is Getting an Upgrade!