At the Google Next event in New York City, executives from Sungard and PwC talked about how they're applying the company's cloud platform to meet enterprise-scale big data needs.

Eager to raise its profile in the developer community, Google offered a comprehensive tour of its Google Cloud Platform (GCP) during its Google Next 2015 event at the Manhattan Ballroom in New York City on Friday.

Google is trying to remain competitive with Amazon Web Services or, as Google executives said at the event, that "other cloud company."

Schachter noted two ongoing trends: The explosion of data; and the need for companies to wrangle those terabytes. Companies cannot be burdened with the need to build their own IT infrastructure, and must respond to trends in days or weeks, not years.

Google is betting that major enterprises will see its Google Cloud Platform as one way to address these trends. GCP is a collection of 20 or so system-wide tools that can manage, organize, secure, and move big data applications. Taken together, GCP is both Platform-as-a-Service and Infrastructure-as-a-Service (PaaS/IaaS). Pricing depends on the size and scale of your in-house system. (Google offers a calculator to help you figure it all out.)

[ Check out our faves from this year's Worldwide Developers Conference. Read Apple WWDC 2015: 10 Best Moments From The Show. ]

"We are creating an open environment where others can collaborate with us," Schachter said. Google has been evolving and making public its internal toolset for the past 15 years. 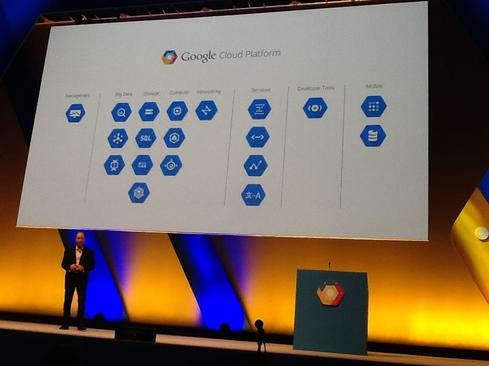 A number of Google clients at the event gave their perspectives on using GCP, to craft their own solutions. Neil Palmer, CTO of Sungard Financial, described how his firm used GCP to construct a cloud-based audit tracking and security suite for financial services. The system had to handle about 15 terabytes of data per day. US law requires the data to be retained for six years, which amounts to 30 petabytes of data, he said. Palmer said Sungard was able to craft its suite to meet that challenge relatively quickly without the distraction of having to build a concurrent IT infrastructure.

The audit trail implicit in Sungard's service offering should be able to pinpoint the buyer and seller in any trade. Palmer offered the counter-example of the "flash crash" of five years ago, when a lone individual drove down the Dow Jones Industrrial Average by more than 1,000 points in minutes. "It shouldn't take five years to find the culprit," Palmer said.

In the case of PwC, another GCP client speaking at the event, it took some effort to become convinced that Google's offering was "enterprise-ready." But the firm had to develop cloud and analytics to add to its advisory service, so it became a matter of "digitize or be disrupted," said Jake Schmidt, managing director at PwC.

Could this mean a future where we see integration between different clouds offered by different vendors? "I don't know of any large-scale [operations] mixing clouds," said Sungard's Palmer.

Google is sweetening its pitch to developers by offering a $500 coupon to purchase GCP services, on top of a free trial. There was also a free training session on GCP held during the event as well.