The two leading cloud productivity suites -- Google Apps and Microsoft's Office 365 -- each have a lot to offer. But which one is right for your organization? Here's a look at how they stack up. 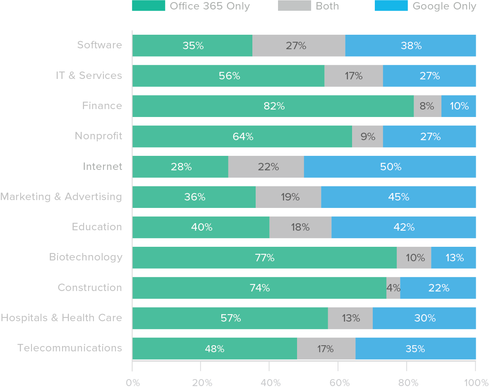 Google and Microsoft have been fighting over business customers for years, and with the appointment of Diane Greene late last year as the head of Google's enterprise group, that struggle seems destined to become more intense.

But strangely enough, customers aren't necessarily choosing sides when it comes to the cloud productivity suites offered by the two companies. According to Okta's [email protected] 2016 report, over 40% of its customers user both Google Apps and Office 365.

"The most common reason for the overlapping products was that different departments use different apps," the report says, noting that at least 30% of respondents said they maintained Office 365 to simplify the licensing and upkeep of Microsoft's desktop Office apps.

As businesses shift toward cloud-based applications, there appears to be room for both Google Apps and Microsoft Office 365, at least while the cloud transition remains underway. The market's rising tide lifts all boats.

Research firm Gartner in February said only 13% of publicly listed companies around the globe use Microsoft Office 365 or Google Apps for email. Of those, 8.5% use Office 365 for email, while 4.7% use Google Apps for Work. The remaining 87% rely on on-premises, hybrid, hosted, or private cloud email managed by smaller vendors.

Eric Berg, chief product officer for Okta, in a phone interview said, "If you look at Microsoft, its biggest strength is based on the large percentage of the market using Exchange for email on the backend. A lot of people are used to Outlook, whether they love it or not."

Berg argues that Google provides a better experience in online collaboration because the components of Google Apps were built for the Web.

At Okta, said Berg, people use Office 365 and Google Apps. When the company was smaller, he said, it used just Google Apps. "I was always frustrated because Google had this Google Apps for Outlook plugin that never provided the native Exchange experience."

Ultimately, Berg argues, the decision about whether to use Google Apps, Office 365, or both depends on the company's IT investments, what employees want, and the required capabilities.

Here's a look at how Google Apps and Office 365 stack up in terms of pricing, apps, and other features you need to consider when making your decision. Which suite do you use at your company? Or do you use both? Tell us why your choice was, or was not, the right one.


CardioLog Analytics is a reporting solution designed specifically for all versions of SharePoint portals and Social Platforms, such as Yammer, Sitrion and more. It's available as an On-Prem or SaaS deployment.  The solution helps stakeholders and admins to better engage their portal users, and provides detailed usage reports accompanied by unique analytics insights. CardioLog Analytics is the only on premises SharePoint reporting solution for large enterprises and government institutions.


For further information, check out Intlock

After using both tools,   I would use this analogy,   Google gives you a basic toolkit (hammer,  pliers,  screwdriver, wrench)   Enough to get the job done,  intuitive,  fast,  works well on multiple devices.    A broad range of tools that work quite well.     Microsoft gives you the 349 piece toolkit,   Way more than most people need and you will need an instruction manual to figure out how to use all of the tools.   They work pretty well on the Computer,  but not so on other devices and the integration between client and web versions is poor.   Considering the additional cost of O365,  the additional support that is required,  and the additional confusion, Google is the clear winner.

Would've expected Non-Profits to be using Google Apps.  Guess - as someone mentioned - that the C-suite tells the staff what to use.  Sad commentary that many non-profits have C-suite occupants that make as much as for-profit enterprises and manage the same sort of megalomania.

Also have fond memories of Borland, 1-2-3, WordPerfect. Even bought a spreadsheet compiler once because my company was too cheap to buy a real database.  "When all you have is a hammer, everything looks like a nail!"
Reply  |  Post Message  |  Messages List  |  Start a Board

Apparently it is part of Corel's WordPerfect Office Suite. I remember WP moving on because Novel purchased them but i lost track of QP and remember it from Borland.

All this is old stuff. Ever seen Engelbart's "Mother of all Demos"? There he demonstrated collaborative editing ....that was in 1968. So what did the Googles and Microsofts of our time do since then? Make it look pretty, OK, what else?
Reply  |  Post Message  |  Messages List  |  Start a Board

There is also LibreOffice Online if it has to be an online version.
Reply  |  Post Message  |  Messages List  |  Start a Board

I believe Quattro Pro is still alive and well.

I hope it's still just as good. Borland did good stuff - Quattro Pro and Paradox. And the right-click.
Reply  |  Post Message  |  Messages List  |  Start a Board

Wow Quattro Pro! I remember using that. It was the best spreadsheet at the time. Now it is a trivia subject! I liked WordPerfect too much better than Word. I miss a lot of the old software you mention. Times have really changed.
Reply  |  Post Message  |  Messages List  |  Start a Board

I understand its not the topic of this article, but, a large factor in the decision is due to C-suite preferences.  Myself, have seen most offices become proficient faster and enjoy lower support costs from Google apps.  While Office suite has much more functionality and customizable, most users in an enterprise do not need that depth.
Reply  |  Post Message  |  Messages List  |  Start a Board

It's a shame that there can't be more entrants into this space. Everything that's out there in my view has a flaw. Some have fewer flaws than others --- I think Office and Box fit int this group --- while others annoy the heck out of me --- DropBox fits here for sure.
Reply  |  Post Message  |  Messages List  |  Start a Board
Page 1 / 2   >   >>
Editors' Choice
Hot Topics