Car customers increasingly want connectivity in vehicles. That desire is driving change in the auto industry.

A report published on Tuesday, Sep. 15, by global consultancy McKinsey, "Competing for the Connected Customer: Perspectives on the Opportunities Created by Car Connectivity and Automation," (summary, full pdf here) finds that 37% of car customers in the China, Germany, and the US would switch to a car made by a different manufacturer if that were the only way to have full access to their applications, data, and media.

In a phone interview, Hans-Werner Kaas, senior partner and head of the McKinsey automotive and assembly practice, said that the study shows the availability of connectivity-enabled devices has become more important for consumers when making vehicle decisions.

"The consumer is clearly prioritizing these types of features," he said.

That interest translates into a business opportunity. According to the report, 32% of consumers said they would pay a subscription fee for connected services, up from 21% a year ago.

"What we see in the industry is that almost every automaker, with varying degrees of effort, is trying to understand the Software-as-a-Service model," said Kaas.

Fortunately for automakers, privacy concerns look like more of a speed bump than a roadblock to potential services. The report finds that consumers are mostly willing to allow use of location data in apps that pertain to driving and navigation, more so when service providers promise not to share that information with third parties. 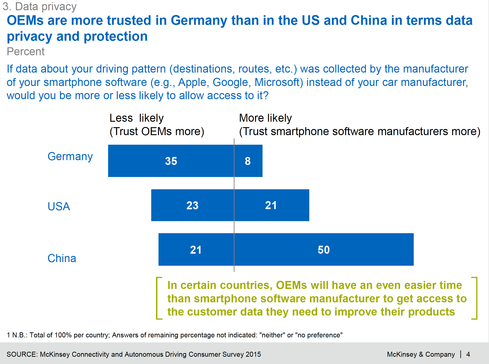 In Germany, there's greater inclination to trust of automakers to respect privacy. In China, app makers are seen as more responsible stewards of data. In the US, trust is more evenly split.

Based on the constant stream of news about research into self-driving cars, it's hard to imagine there's a single auto executive unfazed by the way technology change is transforming the competitive landscape.

Google's hiring of auto-industry veteran John Krafcik, characterized by The Wall Street Journal, as "a message that [Google] is serious about the business side of autonomous vehicles," is the latest in a long list of moves that point to the technology industry's focus on remaking the auto industry. Additional examples include Apple's Project Titan, Uber's poaching of 40 autonomous car researchers from Carnegie Mellon University, and Tesla's Gigafactory.

Ford CEO Mark Fields clearly got the memo. At CES 2015 in January, he described Ford not as a car company but as a mobility company that is exploring transportation without car ownership. Many other automakers can also read the writing on the wall.

By 2020, there will be 250 million connected vehicles on the road, according to Gartner Group.

Connectivity represents an obvious opportunity for automakers, but autonomous driving technology -- made possible in part by a constant network connection -- may prove more difficult to navigate. Despite evident enthusiasm among the young for autonomous vehicle ownership (87% of 18- to 29-year-olds expressed interest in owning an autonomous car, compared with 66% of those over 60), according to McKinsey, doubts about the technology remain.

[Read more about why IT should be concerned about autonomous cars.]

Only 49% of respondents said they'd switch to a fully autonomous vehicle without the option for human control. Only 61% said cars with autonomous functions should be legal.

Kaas said he doubts people will be willing to surrender the life-and-death decisions faced by human drivers to machines. "For legal and maybe moral reasons, we may not want to delegate those to technology," he said. "What I think is a more likely scenario is that a human driver will always need to be capable of taking control in tough situations."

McKinsey's report advises businesses with a stake in the game to take the same sort of decisive action to protect and grow their market share. Businesses, evidently, don't run well on autopilot.

Thomas Claburn has been writing about business and technology since 1996, for publications such as New Architect, PC Computing, InformationWeek, Salon, Wired, and Ziff Davis Smart Business. Before that, he worked in film and television, having earned a not particularly useful ... View Full Bio
We welcome your comments on this topic on our social media channels, or [contact us directly] with questions about the site.
Comment  |
Email This  |
Print  |
RSS
More Insights
Webcasts
People Are The Most Important Part of Autonomous SOC
Nip Ransomware in the FUD: Detecting Attacks Pre-Encryption
More Webcasts
White Papers
The Psychology of Cyber: How Micro-Drilling Enhances Crisis Response
Improving Security by Moving Beyond VPN
More White Papers
Reports
Trustwave Global Security Report
Accelerate Threat Resolutions with DNS
More Reports

It's good to see the advances taking place in autonomous driving. With everyone  paying attention to their mobile devices instead of the road while their driving, it's important for someone (OK, something) to be in charge.
Reply  |  Post Message  |  Messages List  |  Start a Board
Editors' Choice
Hot Topics