50%
Tweet
File sharing just got easier for Windows 10 users, thanks to Microsoft's partnership with Box. The new app is currently available for PCs and tablets.

Microsoft and Box are teaming up to deliver an application for the Windows 10 operating system that will make file sharing across different Windows devices a lot easier.

In addition, users can work on Microsoft Office files directly from the app and get updates on changes with the recently updated Windows notification center.

"With 50,000 paying businesses, including 52% of the Fortune 500 and more than 40 million users, it's critical for Box to ensure that customers can work on their content across a wide variety of devices and platforms," Duncan Fisher who works on the mobile applications product management team at Box, wrote in a Nov. 11 blog post. 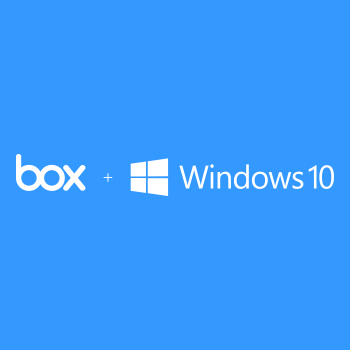 Other features include integration with the Windows file picker, which means users can create and edit Office files such as Word, PowerPoint, or Excel, and have those changes saved directly back to Box.

Users will also have the ability to pin certain Box files and favorites to the Start screen using Windows 10 Live Tiles so they can access them immediately. Users can also work on Box and other apps side-by-side with the Windows 10 multitasking feature. They have the ability to resize Box to make it as big or small as needed.

The news follows an announcement by rival Dropbox earlier this month, which introduced Dropbox Enterprise, a version of its cloud storage service for large organizations.

The company also announced Dropbox Partner Network to support resellers and strengthen ties to other technology providers. It also expanded the capabilities of the Dropbox Platform.

Dropbox and Box both offer unlimited storage to business-tier accounts, on the assumption that corporate users aren't as likely to have 75TB of media files to store online, like Microsoft's most committed freeloaders. Microsoft recently ended its "unlimited" OneDrive storage plans, citing abuse by a few customers.

An October report conducted by IDG Research indicated businesses are still struggling with decisions regarding the adoption of on-premises, hybrid, or cloud-based file transfer technologies.

While 45% of respondents said they allow their users to store sensitive data in the cloud, 43% still do not and will not allow the use of cloud-based applications, an almost even split.

There remains some apprehension around deploying file transfer solutions in the cloud center in regards to compliance, reliability, and control, with 82% of those surveyed noting confidence in meeting compliance mandates, 73% citing reliability at scale, and 67% concerned about the ability to track file movement.

Nathan Eddy is a freelance writer for InformationWeek. He has written for Popular Mechanics, Sales & Marketing Management Magazine, FierceMarkets, and CRN, among others. In 2012 he made his first documentary film, The Absent Column. He currently lives in Berlin. View Full Bio
We welcome your comments on this topic on our social media channels, or [contact us directly] with questions about the site.
Comment  |
Email This  |
Print  |
RSS
More Insights
Webcasts
Building a Strategy for Detection and Response
5 Steps to Integrate SAST into the DevSecOps Pipeline
More Webcasts
White Papers
Cybersecurity Research: 2019 AWS Cloud Security Report
Securing Real-Time Communications for Dummies Book
More White Papers
Reports
How Enterprises Are Developing and Maintaining Secure Applications
The Definitive Guide to Managed Detection and Response (MDR)
More Reports