In a four-strike incident, power to Google Compute Cloud disks in Ghislain, Belgium, gets interupted and data writes are lost.

Google experienced high read/write error rates and a small data loss at its Google Compute Engine data center in Ghislain, Belgium, Aug. 13-17 following a storm that delivered four lightning strikes on or near the data center.

Data centers, like other commercial buildings, can be protected from lightning, and Google offered no details as to how its persistent-state disk equipment had been affected by the strikes, other than to say they caused power supply lapses. Emergency power kicked in as planned, but in some cases the battery backup to the disk systems did not perform as expected.

According to a summary of the incident by the Google cloud operations team posted to its Google Cloud Status page: "Although automatic auxiliary systems restored power quickly, and the storage systems are designed with battery backup, some recently written data was located on storage systems which were more susceptible to power failure from extended or repeated battery drain."

The Cloud Status summary doesn't say whether the repeated strikes led to multiple failures of the power supply to the disks.

The summary also did not say the data center was struck four times, as a BBC report on the incident noted. Rather, Google said only that there were "four successive strikes on the electrical systems of a European data center."

That could mean some of the strikes were on utility power substations or telecommunications lines outside the data center, and those strikes affected the equipment in the building. Such strikes could result in voltage surges into a data center. Surge protection is a routine measure at data centers, but it's possible that repeat surges or other unexpected electrical phenomenon caused an equipment failure that led to a temporary power loss. In a State of Iowa data center last year, a power surge or another electrical phenomenon caused a transient voltage surge suppression box to fail, which in turn cut power to the whole data center. 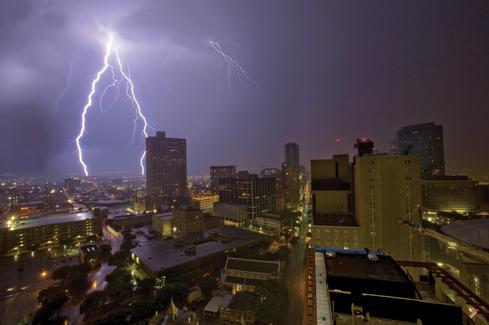 In Google's situation, its summary report said: "In almost all cases the data was successfully committed to stable storage, although manual intervention was required in order to restore the systems to their normal serving state. However, in a very few cases, recent writes were unrecoverable, leading to permanent data loss on the Persistent Disk."

Any loss of data is a serious incident for a cloud service provider, and they take extraordinary measures to prevent it. Data sets are routinely copied three times, so that a hardware failure will still leave two intact copies. But the power interruption in Ghislain caused some data writes to disk to be lost, and it was those write incidents that created the lost data.

As a way of minimizing the loss, the Google summary cited a statistic that represented the amount of persistent disk space that had been affected out of the total available in Ghislain -- "less than 0.000001%." That was a meaningless figure to those customers who happened to be doing frequent read/writes with their systems at the time. A more meaningful figure would have been simply the total amount of data lost in kilobytes, megabytes, or terabytes or the percentage of writes lost.

A lost write in some cases might mean a lost transaction, with lost revenue as well, as opposed to content data that could be called up again from snapshots or other backup storage.

Google apologized for the loss in its summary of the incident: "Google takes availability very seriously, and the durability of storage is our highest priority. We apologize to all our customers who were affected by this exceptional incident."

It added: "We have conducted a thorough analysis of the issue, in which we identified several contributory factors across the full range of our hardware and software technology stack. We are working to improve these to maximize the reliability of GCE's whole storage layer."

Google Cloud Status began reporting an increase in disk read/write error rates in customer use of its "Standard Persistent Disk" at 9:18 p.m. Pacific time Aug. 13, continuing in decreasing frequency through early Aug. 17, when the incident was declared over. Google spokesmen said the company is working to prevent a reoccurrence of the incident.

The mishap in some ways was reminiscent of an electrical storm that passed over Dublin, Ireland, in August 2011, knocking out data centers on which Amazon Web Services and Microsoft Azure both depended. Early statements by Amazon raised questions about the electrical utility's ability to maintain power. But the utility denied several days afterward that any of its facilities had suffered a lightning strike. There was no further clarification of the incident.

Charles Babcock is an editor-at-large for InformationWeek and author of Management Strategies for the Cloud Revolution, a McGraw-Hill book. He is the former editor-in-chief of Digital News, former software editor of Computerworld and former technology editor of Interactive ... View Full Bio
We welcome your comments on this topic on our social media channels, or [contact us directly] with questions about the site.
Comment  |
Email This  |
Print  |
RSS
More Insights
Webcasts
Securing and Monitoring Networks in the 'New Normal'
What We Can Learn from Sports Analytics
More Webcasts
White Papers
A Practical Guide to SASE Migration
Passwordless: The Future of Authentication
More White Papers
Reports
2020: Threats in Review
Special Report: Edge Computing: An IT Platform for the New Enterprise
More Reports

To prevent data loss, Google, like other cloud providers, recommends keeping a back up system in a second zone. At Ghislain, it has three zones available: Europe-West1-b, Europe-West1-c and Europe-West1-d. The disks affected were in West1-b. Drives in c and d remained unaffected and would have provided a quick recovery if customers had replicated systems and data flows there.
Reply  |  Post Message  |  Messages List  |  Start a Board

It surprises me that backup systems fail to work for the one job they wait for. As I recall, there was a SF-based ISP a few years back that had a failure and its backup generators failed to work as expected. Failover switching ought to be more reliable.
Reply  |  Post Message  |  Messages List  |  Start a Board

I agree.  You would think that if you are promoting a service that is supposed to be up almost 100% of the time, that you have proper failovers in place.  The sad reality is that often unless they are spread out, replicated in another site, or can react quick enough to failover, it's almost impossible to respond to something like lightening which is sadly really unpredictable.  Nonetheless, it's just another great reason organizations should use replication incase the main data site gets interrupted.
Reply  |  Post Message  |  Messages List  |  Start a Board

Yeah it also surprises me, I thought that kind of issue had been already fixed year ago as you mentionned before.
Reply  |  Post Message  |  Messages List  |  Start a Board
Editors' Choice
Hot Topics