Google is cutting prices for its cloud computing services again. Following Google Cloud Platform price cuts ranging from 30% to 70% earlier this year, Google is lowering prices across a range of cloud services from 10% to 79%.

Google's price cuts will put more pressure on Amazon Web Services, Microsoft Azure, and other cloud computing platforms. Although Amazon has been largely keeping pace with Google's pricing, the company's recent disappointing financial results could limit its willingness to continue doing so.

But Google will have to attract new customers for years before it approaches the revenue of Amazon Web Services. Research firm TBR recently estimated that AWS's public cloud infrastructure-as-a-service revenue will be about $4.7 billion in 2014, compared to $156 million for Microsoft and $66 million for Google. The firm notes that Amazon's lead can be attributed to its six-year head start as a cloud infrastructure provider. 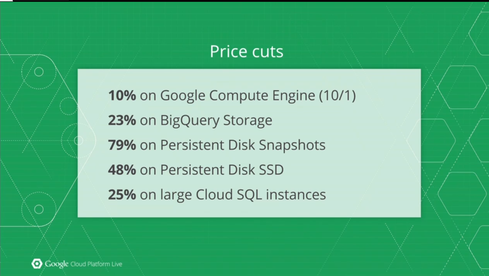 "It brings modern debugging expectations to the cloud," said Heilig.

With support for auto-scaling, Cloud SDK, and Docker container runtimes, Managed VMs makes App Engine capable of running any language or library rather than just those chosen by Google.

Like App Engine, Google Compute Engine has gained an auto-scaling service, Google Compute Engine Autoscaler, to grow or shrink sets of VMs based on various criteria. It has also gained local SSD storage for VMs that require high-performance storage: Google claims it can deliver 680,000 read IOPS and 280,000 write IOPS. Both services are in beta. 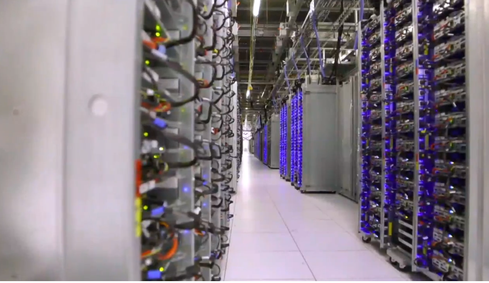 Google also has taken steps to improve network connectivity for its customers. Google is offering three options for connecting to its vast fiber network: direct peering, available in 33 countries at over 70 points of presence; carrier interconnections through Google partners such as Equinix, IX Reach, Level 3, TATA Communications, Telx, Verizon, and Zayo; and VPN connectivity, coming next month.

"You can't have a great cloud application without great networking," said DeMichillie.

Thomas Claburn has been writing about business and technology since 1996, for publications such as New Architect, PC Computing, InformationWeek, Salon, Wired, and Ziff Davis Smart Business. Before that, he worked in film and television, having earned a not particularly useful ... View Full Bio
We welcome your comments on this topic on our social media channels, or [contact us directly] with questions about the site.
Comment  |
Email This  |
Print  |
RSS
More Insights
Webcasts
Building Asset Management into Your Enterprise Security Strategy
Take DevOps to the Next Level
More Webcasts
White Papers
The Impact of the SolarWinds Breach on Cybersecurity
ITSM for the Enterprise - What Makes it Work?
More White Papers
Reports
Enabling Enterprise Resiliency Through Cyberthreat Detection
The State of DevSecOps Report
More Reports

App Engine has been hampered by its limited language support. This is another cloud setting where Docker is likely to have a major impact. Any language can be imported to App Engine in a Docker container and can run there. Docker enables App Engine to escape its Python bias.
Reply  |  Post Message  |  Messages List  |  Start a Board
InformationWeek Is Getting an Upgrade!

Does Identity Hinder Hybrid-Cloud and Multi-Cloud Adoption? Joao-Pierre S. Ruth, Senior Writer,  4/1/2021
White Papers
Cloud Threats Are Different, Your Security Should Be Too
The 2021 Threat Hunting Report
WhiteHat Professional Services Package
Dark Reading Report: Battle for the Endpoint
The Five Major Security Pitfalls of WFH and How to Solve Them