Enterprise spending on cloud has grown 38% in 2014, and IT now controls 80% of that budget, finds Verizon study.

Verizon's second annual "State of the Market: Enterprise Cloud" report, released Tuesday, reports that 71% of businesses expect to have public-facing applications in the cloud by 2017.

The Verizon report also is broader than vendor surveys that primarily reference their own customer base. While Verizon draws data from its own enterprise-level cloud customers, which produced 181 responses for this year's report, it also included 451 Research's 988 responses from cloud users (through May this year); The Harvard Business Review's Analytic Services report, "Business Agility in the Cloud" in July, with 527 respondents; and Forrester Research, Accenture, IDC, and Gartner reports on cloud computing. As such, it tends to offer more of a composite picture than some surveys and reports.

[Are you spending wisely? See IT Investments: 5 Common Mistakes.]

And if it was once true that non-IT departments led a company's decision-making on adopting cloud, that predominance of shadow IT is no longer the case. Not only has the enterprise spend on cloud grown by 38% over the last year, IT's share of that spending now reaches 80% of the total. "Over half is managed directly by the CIO," said the report, borrowing that conclusion from a study by the 451 Research Group earlier this year. So much for concern about the chief marketing officer taking over the CIO's budget.

Market researcher IDC supported that finding. Not only is spending on the cloud growing, but it represents a rapidly increasing part of the overall IT budget. Organizations adopting cloud services expect to spend "54% of their IT budget on cloud in the next two years," Verizon said, citing a recent IDC report. 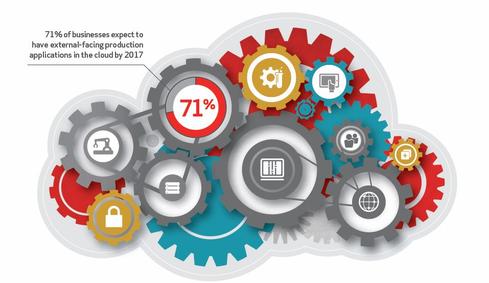 The debate over public versus private cloud "is now moot," Verizon reported, without necessarily making it clear exactly what the outcome had been. Debating the merits of one versus the other "is insufficient to describe the complex decisions that companies are facing when selecting a delivery model," it said. In other words, companies don't expect all their needs to be met by one or other. If anything, they're mapping out a future that will include both. "We've seen the rigor of the selection process increase noticeably in the last 12 months," Verizon concluded, which suggests companies have a clearer idea of what they're looking for as they venture into the public cloud.

Verizon also noted increased use of the term virtual private cloud, "indicating a blurring of the line separating public from private cloud." Virtual private cloud, however, usually means a more private implementation of enterprise servers inside a public cloud provider, although not necessarily in a multi-tenant environment.

While infrastructure-as-a-service is viewed as an implicitly efficient way of running computing, only 14% of those contacted said that saving money was a primary motive for using cloud computing. Rather, 32% said the primary perceived benefit of the cloud was agility, not cost savings, according to the report.

Commodity cloud is a highly visible subject in the marketplace, but the "the most interesting work is happening on the various types of enterprise-class cloud available."

That appears to be Verizon's own conclusion, as no source was named for it. Verizon earlier this year said it would continue to offer commodity cloud services, but it was putting more emphasis on enterprise-level cloud services. For example, in late April, it announced Secure Cloud Interconnect to give enterprise customers the ability to connect workloads in different clouds via a private-line IP service.

A surprising 41% of cloud users say they are now relying on public cloud services to run mission-critical workloads, whereas in the past they've emphasized public facing websites and informational services. By mission-critical, respondents mean things such as e-commerce for retailers.

Charles Babcock is an editor-at-large for InformationWeek and author of Management Strategies for the Cloud Revolution, a McGraw-Hill book. He is the former editor-in-chief of Digital News, former software editor of Computerworld and former technology editor of Interactive ... View Full Bio
We welcome your comments on this topic on our social media channels, or [contact us directly] with questions about the site.
Comment  |
Email This  |
Print  |
RSS
More Insights
Webcasts
Key technology trends in 2021 - Making these technologies work for your business
Optimizing App Performance in the Cloud
More Webcasts
White Papers
Why Add Security to Your Skill Set and How to Do It
MontanaPBS Shifts to Agile Broadcasting with Help from Raritan KVM Solutions
More White Papers
Reports
The Infoblox Q4 2020 Cyberthreat Intelligence Report
Building an Effective Cybersecurity Incident Response Team
More Reports

IT leadership on cloud decisions is one of the most important points raised in this article. One hopes that IT will be pro-active on this next big technology opportunity.
Reply  |  Post Message  |  Messages List  |  Start a Board

The question has been raised in Twitterdom, considering the "IT's Driving Again" headline, Is that a good thing? Yes, it is, if you care about data security and data management. Every organization has to be able to trust its data, even though Shadow IT doesn't know what that means.
Reply  |  Post Message  |  Messages List  |  Start a Board

"Organizations adopting cloud services expect to spend "54% of their IT budget on cloud in the next two years,""

This is very true, and one of the main reasons if to have services that can be more easilly accesible for other non-admin users. This also allows for more remote access to be available.

In the Travel and Hospitality Industry this is picking up a lot of momentum.
Reply  |  Post Message  |  Messages List  |  Start a Board

Gartner is quoted in the report as saying 50% of cloud deployments "will suffer from network performance issues" as they attempt to operate through 2015. That's one area where AT&T, Verizon, CenturyLink and NTT have an advantage with their command of private line networks. And that's why Amazon recently partnered with AT&T to get more pirvate line access and service.
Reply  |  Post Message  |  Messages List  |  Start a Board

Interesting findings and the point about composite data is important. Does this match what is happening inside your orgs, readers?
Reply  |  Post Message  |  Messages List  |  Start a Board
Editors' Choice
Hot Topics