50%
Tweet
Cloud backup, archiving, and storage used to mean running a separate web-based management system. Now gateway appliances turn the cloud into just another resource, and IT must get on board.

Mention the phrase “hybrid cloud,” and most IT pros immediately think of a server architecture that melds on-premises VMs with public IaaS resources, with application workloads seamlessly migrating from one to another. True enough, but private/public hybridization doesn't end at the server.

Cloud storage is an increasingly valuable and popular part of enterprise IT's portfolio. In our 2013 InformationWeek State of Storage Survey, 71 percent of respondents said they use cloud storage or plan to do so. That's up 14 points from 2012. I expect we'll see another sizable increase in cloud storage adoption when the 2014 results are in (keep an eye out for the survey in the next few weeks), with data backup and recovery remaining a common application. The Cloud Storage Survey also shows strong adoption.

Yet outside of Silicon Valley startups living with zero capex budgets and a few intrepid individuals working entirely on cloud services (guilty as charged), cloud storage remains an ancillary medium used to offload cold data from on-premises archive hardware or to support new cloud-based applications. Fully delivering on its promise requires more: transparently bridging the cloud and on-premises storage domains. Making cloud storage as easy to use as a local NAS box, thus reducing the barriers for both end users and application developers, is the raison d'etre of cloud storage gateways.

Storage teams need to get on board. 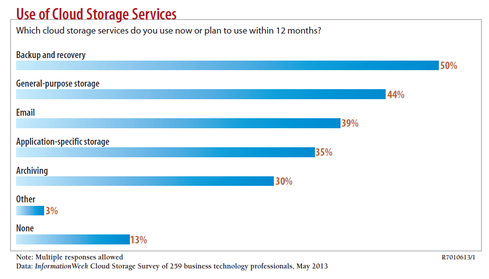 Early efforts like Amazon's AWS Storage Gateway are incredibly useful for organizations that have already deployed S3 storage and can spin up a gateway VM to run the storage appliance -- a tedious process but not rocket science. As Drobo's step-by-step guide for SMBs points out, you can use the free version of VMware ESXi on a server along with a prebuilt software image. Yet many IT shops don't have the time or resources to roll their own gateways. They need the SaaS version: a packaged, cloud-capable backup and recovery service that systems can access with minimal configuration.

That's where storage gateways come in. These systems are built to run as virtual appliances on a new generation of SMB or branch office routers sporting integrated server blades. One example is Asigra's new Cloud Backup Connector. Asigra, which has plenty of experience providing backup software to service providers, has hybridized the product to allow remote application servers to target Asigra-powered archives in a central enterprise datacenter, one or more remote cloud services, or even locally on the appliance. Leveraging the Cloud Connector feature of Cisco's latest ISR 2900 and 3900 branch office products is the product's secret sauce.

[ (At Least) One Thing You Don't Know About Cloud Backup ]

Asigra executive vice president Eran Farajun told us pairing a cloud gateway with a branch office router provides several benefits. Chief among them is offloading traffic from private WAN links between remote sites and the central office. Remote sites are typically backed up to a central repository, but with data footprints increasing faster than WAN bandwidth can keep up, backup windows have started bleeding into work hours. The network configurations used by many organizations mean that, even when using a cloud service, traffic still routes through the central datacenter.

Pairing backup with cloud storage and running the gateway on the edge router solves both problems. Backup traffic now goes over the public Internet, not pricey point-to-point WAN links.

As part of its efforts to turn itself into a full-service IT provider, Cisco is introducing richer application support into network gear. Think transforming its popular SMB and branch office router products into full-blown servers by morphing UCS server blades into ISR switch modules. Known as the UCS E-Series, these use Xeon E5-2400 or E3-1100 power-optimized CPUs with two internal Gigabit Ethernet interfaces; as many as three front-accessible, hot-swappable, 2.5-inch drives or SSDs; and up to 48 GB RAM in a single- (E3) or double-wide (E5) ISR blade. The servers support popular hypervisors -- vSphere, Hyper-V, and XenServer -- and guest operating systems and include a UCS-integrated management controller accessible via a web interface or remote KVM with CLI.

Cisco initially targeted the product as a way to eliminate a separate local server for functions like AD, DHCP, and DNS or for local applications like POS, file shares, or medical record or inventory management systems at retail sites or branch offices. Yet the server module is equally capable of running a new set of cloud-connected applications that were initially exclusively Cisco products, like Web security, UC/VoIP, video conferencing (WebEx), and application visibility and control (QoS), but now include several third-party applications, including a CTERA storage gateway/NAS filer and the Asigra cloud backup software.

Running the software on a router blade does more than just eliminate a server. Exposing network information and services via Cisco's onePK API lets Cloud Connectors dynamically respond to changing network conditions; think throttling back traffic when links get congested or automatically directing traffic to a backup link if a primary goes down. "It makes the router more than a router," Farajun said.

Asigra's cloud gateway offers the same set of features as its standalone products, including an agentless design that connects to target machines using local APIs, like Microsoft VSS or Oracle RMAN; data-integrity checks and validated file recovery; built-in AES-256 encryption; data compression and deduplication; data replication to multiple backup repositories; and a central administration console for managing backup jobs, schedules, retention policies, and restores. According to Farajun, the hybrid design allows SMBs and branch offices to back up directly on the cloud appliance. IT can store up to 2 TB of compressed and deduplicated data on the device’s internal drive, with the ability to scale to 10 TB of local data storage per device, while storing secondary copies at a cloud service.

As cloud storage becomes mainstream, I expect better support for cloud services as backup and storage targets across the full spectrum of storage appliances and applications. When everything from SOHO NAS boxes like Synology, QNAP, and Thecus to high-end vendors like EMC and NetApp support S3 and Glacier storage as backup targets, it's clear the cloud is becoming just another storage tier.

We welcome your comments on this topic on our social media channels, or [contact us directly] with questions about the site.
Comment  |
Email This  |
Print  |
RSS
More Insights
Webcasts
The Changing Face of Threat Intelligence
Protecting Mobile Apps and APIs from the Inside Out
More Webcasts
White Papers
Getting Cloud Management Right
2020 Trends to Watch: Cybersecurity
More White Papers
Reports
The New Face of IT Automation
State of Cybersecurity Incident Response
More Reports

Also interesting is what Drobo has done to integrate S3 into its storage appliances.  (http://www.drobo.com/solutions/for-business/amazon-aws/)
Reply  |  Post Message  |  Messages List  |  Start a Board

Asigra hasn't announced anything, but given that it is an arms merchant for many cloud backup services and its on-prem software runs as a virtual appliance, I wouldn't be surprised to see it show up in other branch-office-in-a-box equipment. I don't know of other router vendors adding server cards to their hardware however and that's a prerequisite. Alternatively, I could see Asigra offering modules for mid-tier NAS appliances from the ususal SOHO suspects (Netgear, QNAP, Synology, Thecus, etc.) since these generally run Linux kernels and many models will (or soon will) have enough horsepower to run KVM.

Kurt, Does Asigra plan to support other branch office products besides Cisco's ISR 2900 and 3900? Granted, these are probably popular, but my take is that there's a mish-mash of gear at most branches.
Reply  |  Post Message  |  Messages List  |  Start a Board
Editors' Choice
Hot Topics