After a Moody's credit rating downgrade, Amazon will pay a higher rate to borrow than well-funded competitors, such as Apple, Microsoft, and Google, but says business expansion will pay.

As it moves towards the end of its peak revenue quarter, Amazon.com remains more committed to expanding its business than the possibility of showing a profit. As it prepared to borrow for more expansion last week, Moody's Investor Service lowered Amazon's rating from "stable" to "negative" and gave Amazon a Baa1 rating for borrowing.

Amazon has been able to use the substantial cash flow produced by its quarterly growth in sales to build out parts of its business, such as its 10 modern, robotic distribution centers or its rapidly growing Amazon Web Services cloud infrastructure. Amazon's revenues from AWS have always fallen under its non-specific "other" category, and Moody's cited Amazon's recently announced plan to offer debt, combined with "lack of visibility" on how the funds would be deployed, as reasons for the downgrade.

The size of Amazon's new senior unsecured notes has not yet been determined, said Moody's VP Charlie O'Shea in a news release Dec. 1. It is the financial services company's expectation that the funds will be used for corporate purposes that will support growth initiatives, rather than for shareholder returns.

In a year in which stocks on the Nasdaq have risen 18%, Amazon has fallen 14% as investors become less enamored with its expansionist business strategy, Reuters reported Dec. 2.

Other voices have warned that Amazon will face increasing competition as old-guard retailers, such as Walmart, Target, Best Buy, and Home Depot, find their footing on the Web and start offering holiday bargains on their sites. Brian Sozzi of Belus Capital Advisors said Amazon.com, as a pioneer of Web shopping, "for years had the advantage of getting you the lowest possible price on a mobile device." It would face increasing competition in doing so, he told Reuters. 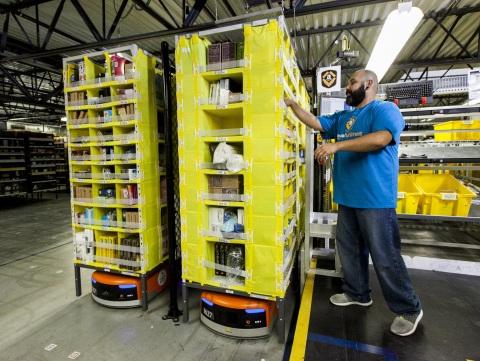 Amazon.com CEO Jeff Bezos appeared relaxed the day after the Moody's downgrade and talked about the stock price at a New York event organized by Web publisher Business Insider. He defended Amazon's business strategy, which is producing $70 billion a year in revenue, as one of a young company willing to engage in risk taking. One such initiative this year was the launch of its poor-selling Fire Phone. "We are a large company, but we are also still a startup. There is a lot of volatility in startups," Bezos said at the Dec. 2 event.

Amazon could make more money on its cloud services if it weren't so aggressively pushing down the price of its service. Its free Trusted Advisor service is an automated review of customer's account configurations, followed by guidance on how the customer could save money. Trusted Advisor has issued 2,613,585 recommendations in 18 months, and customers acting on them have trimmed $350 million from their monthly bills, according to figures presented by senior VP Andy Jassy at AWS's Re:Invent conference last month.

Amazon.com is wise to ignore short term results and expand its market share in its core market -- but it keeps expanding its definition of its core market. I began to have second thoughts when it went into tablets and smart phones. It's going to compete on those fronts as well? Really? On the other hand, it's got a tremendous head of steam in e-retail and rapid fulfillment for e-retail. So how many mistakes can it afford?
Reply  |  Post Message  |  Messages List  |  Start a Board
Editors' Choice
Hot Topics