These low-cost, Web-based devices are wedging themselves into the crowded device list for enterprise end-users. Here's what IT needs to know.

For CIOs and IT organizations, managing user end points has become more difficult in the past few years as device variety has exploded. Not only are IT departments overseeing PCs and laptops, they also have to accommodate tablets and smartphones, which have become typical ways employees complete their work. One more option, the Chromebook, has been gaining traction.

Traditionally, these systems have had a decidedly consumer bent. They are low cost, with prices starting at around $150 for a basic model. A variety of hardware suppliers sell them, including Acer, Hewlett-Packard, Dell, and Lenovo.

[ Where are the IT dollars going? Read IT Spending Reports Show A Tech Market In Transition. ]

Market research firm Gartner expects sales of Chromebooks to rise by 27% this year, compared with last year, and reach 7.3 million units. Business users are one factor driving this growth. Why? In this era of Bring Your Own Device (BYOD), employees like the processing power, screen size, and flexibility that these systems offer.

IT departments are enticed because these systems are simpler to manage than other end points. "The value proposition for Chromebook is its ease in manageability," said Isabelle Durand, principal analyst at Gartner, in an interview. 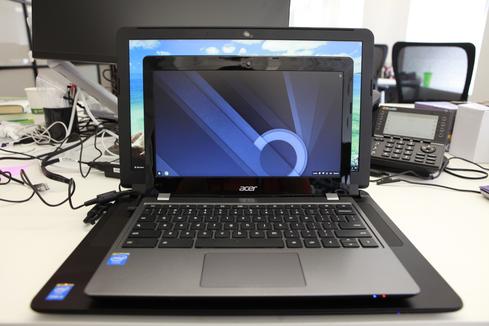 The system does not store data locally, so fewer problems arise. These products largely run only the browser locally, so software updates are not needed as often as with traditional end points. As with virtualized desktops, IT can fix application problems centrally, rather than having to dispense a tech to a remote location.

Security is another strong feature. These systems run software locally, so they are less prone to the malware found on other user end points.

Available software has been a bugaboo that vendors have tried to address. Business tools, such as content-sharing software, videoconferencing, and collaboration apps, have been tailored to these systems. For instance, Google developed Chromebook for Work, a suite of office applications.

A glaring weakness was an inability to work with Microsoft productivity tools, such as Office. Recognizing that barrier, Google teamed up with Citrix to deliver Citrix XenApp on Chromebooks, and VMware to offer VMware Horizon View. With these products, enterprises can support Windows business applications on Chromebooks.

Not all businesses are jumping on the Chromebook train. CIOs need to educate support staff members so they understand how to work with the systems, and extend system management tools to one more device type.

Business interest has come from small and midsized businesses (SMBs) and vertical industries. (Chromebooks have been quite popular in the education market.) "A Chromebook is a device that can be considered by SMBs or new startup companies that do not have the resources to invest too much in IT infrastructure," said Gartner's Durand in a statement.

Chromebooks require that companies move to a public cloud. Larger companies, especially those in financial services and health care, are concerned about compliance issues.

Network connectivity is a potential downside, especially with the lowest-cost models. Since the systems often lack a hard drive, users cannot work if they do not have network access. To be effective, employees require 24/7 high-speed access, a feature that may be lacking as they roam from place to place.

Nonetheless, as the diversity of end point devices in the enterprise increases, Chromebooks extend the IT service repertoire further. "The decision to move to Google Chromebooks for a large-scale enterprise has clear potential benefits, particularly in terms of cost," said Philip Carter, vice president of enterprise infrastructure and software research at International Data Corp. (IDC) Europe, in a statement. Consequently, these systems should be on CIO's radar.

Paul Korzeniowski is a freelance contributor to InformationWeek who has been examining IT issues for more than two decades. During his career, he has had more than 10,000 articles and 1 million words published. His work has appeared in the Boston Herald, Business 2.0, ... View Full Bio
We welcome your comments on this topic on our social media channels, or [contact us directly] with questions about the site.
Comment  |
Email This  |
Print  |
RSS
More Insights
Webcasts
Ten Keys to Better Security Data Analysis
Strategies for Success with Digital Transformation
More Webcasts
White Papers
Sunburst: Impact and Timeline
Prevent vs. Pay: A Better Ransomware Plan
More White Papers
Reports
The State of DevSecOps Report
Assessing Cybersecurity Risk in Todays Enterprises
More Reports

The issue is no local software. Any application that the user runs has to be available on the server. You could use private cloud but would need a private cloud server version of an application like Citrix running a Virtual Desktop. Without it, the user has no way to access the application. Most Chromebooks are connected to public cloud apps, like Google Apps.
Reply  |  Post Message  |  Messages List  |  Start a Board

good point. it sounds great, and then these incompatibilities crop up.

for instance, the security aspect is great, but it doesn't work with MSFT applications. Mayve that was the point -- the change the paradigm, but it doesn't seem to have worked.
Reply  |  Post Message  |  Messages List  |  Start a Board

I'm a little surprised that Chromebooks dont work with private cloud. As I understand there is nothing in the architecture that forbids this. So what's the incompatibility here?
Reply  |  Post Message  |  Messages List  |  Start a Board
Editors' Choice
Hot Topics