Cloud Powers a Hybrid IT and New Digital Existence - InformationWeek

Enterprise data centers aren't going away soon, but the role of the cloud will expand rapidly in our personal and business lives.

The cloud revolution is so persistent, pervasive and performant that it is difficult to discern what changes it will drive next.

Despite its ability to provision on demand, scale out as needed and store data with close to zero danger of loss, the cloud is still just in its infancy. Many more capabilities are about to become standard offerings. Here is an over-the-horizon look at what's possibly coming next.

We think we now see clearly what the cloud is. I would summarize that understanding of the cloud as a set of networked data centers capable of distributing compute cycles on demand at a competitive cost. So what can we add to this cryptic description as a picture of the future?

Cloud workloads do not run in containers, but they will one day and the reliance on containers will be one factor driving the cost of virtual servers from pennies per hour to tenths or hundredths of a penny per hour. This is somewhat contrary to informed opinion, as stated here. We still need to greatly increase our knowhow in managing containers. But a wide variety of parties, from Kubernetes.org, Docker, Mesosphere, Microsoft, OpenStack, CoreOS, Red Hat, Rancher Labs and Cloud Foundry, among others, are engaged in doing so.

Just as relational database with its ad hoc queries and virtual machines with their invisible boundaries were not fully trusted as they first emerged, containers are also not fully trusted at this stage. But they soon will be. They will be found to be monitor-able, manageable and capable of enforcing impermeable logical boundaries. Competitors' data can lie side by side in the same memory space and still avoid spilling over into each other's processing. No service provider, however, wishes to be the first one to prove this.

The cloud is already a recommended alternative for business computing. As global warming continues, it will become a required form of computing by federal, state and local governments. It will be highly recommended by governments for consumers and business. Think tax breaks for cloud operations -- or even mandated cloud operations. Why? Because studies will show how much more thermally neutral it is to conduct business, shopping, education and a long list of other everyday functions in the cloud, as opposed to the more energy greedy practices of today.

Aren't data centers one of the fastest growing areas of new electricity consumption? Yes, but it should be possible to also measure the energy consumption cloud data centers offset. What is known is that cloud infrastructure is among the most energy-efficient forms of compute operations in the world. What isn't known is how effectively the cloud displaces lugging of 4,000 pounds of machinery across a city or county in order to buy a shirt or skirt or tube of toothpaste. Granted online-ordered goods may be delivered by a truck, but that one vehicle is combining the trips of many.

Cloud providers are already striving to rely on green energy and will compete in the future on the basis of their effectiveness in doing so. Amazon launched its most recent wind farm operation in Indiana, as it put back into the grid the electricity consumed by its new cloud data centers in Columbus, Ohio. Facebook builds a clientele of billions, while building ambient air data centers close to sources of hydroelectric power. Apple builds a solar farm and a wind farm next to its North Carolina data center. Microsoft exploits the hydropower of the Columbia River basin. The cloud will spurn coal and provide the model for how an industry becomes carbon-neutral.

In 2009 in Management Strategies for The Cloud Revolution, I said as the cloud server grows in size, the device accessing it will shrink. Right now, our smart phones are getting bigger but there's a pocket-sized limit to the smart phone screen. Soon the many devices feeding data to the cloud and collecting responses will be so small they'll be built into the fabric of our clothes or the temple of our glasses. Multiple sensors and devices will continuously feed our data into the cloud. A handheld, car dashboard-mounted or otherwise mobile device will display the feedback. 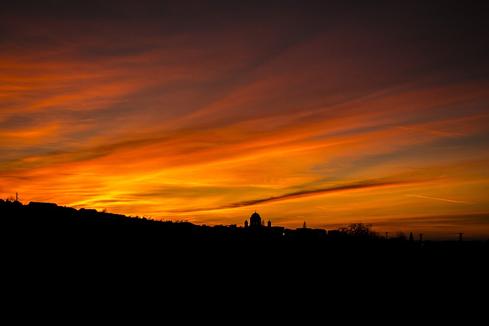 We will be surrounded by a digital envelope as we move through the day and our appetite to interact with the agents giving us feedback will compete with our desire to interface to a sterner reality outside the envelope. The competition is already underway as pedestrians embed their attention in a cell phone while walking down the street. Soon the doctor's office will call in advance, warning of the danger of a heart attack under current exertions. The bank will notify you of an overdraft, before it occurs. The digital envelope will be bombarded with valuable feedback on where you're going and what you're doing. When your vehicle breaks down, check the screen of your digital device: it may contain a trick to temporarily fix it.

The cloud is not a new technology but a synchronization of multiple technologies working together in new ways. Yet, the cloud as a whole is something genuinely new -- a new way of distributing compute cycles and managing interactions between an end user and a endless set of powerful servers  – which will have a continuing impact on how we live and do business.

The cloud will constantly democratize the nature of sophisticated services available to non-moneyed newcomers and this in turn will create a frequent turnover in powerful, young companies. Already those services include image analysis, language translation and machine learning. Use of multiple, sophisticated artificial intelligence systems will slowly spread across the Internet to entry level users.

The cloud has already initiated a shift in IT workloads and that change will soon account for the whole of IT operations… won't it? Actually, no. The enterprise data center will remain a fact of life for the next 20 years. It will shrink in size but companies will keep a core of mission-critical functions and data inside a physical boundary they control, while exchanging containerized applications with a public cloud center. Hybrid cloud operations will be the dominant business reality for a long time to come, until finally the efficiencies of the public cloud overwhelms the last resistance.

Our personal universe will continue to expand, thanks to our improving connection to the cloud. Our business existence will likewise be enhanced, and also increasingly fraught with competition springing up at an instant's notice. Business will gain big rewards for getting out front and big losses for falling behind.

The computer literate worker of the future will have to try to balance these two existences, using an in-between existence on Facebook or some other entity with similar digital citizenship, to offset the buffeting likely to be experienced in business. One role will fade but another will take shape in that intermediary, digital realm, where connections flourish and a new opportunity is always almost within reach.

Charles Babcock is an editor-at-large for InformationWeek and author of Management Strategies for the Cloud Revolution, a McGraw-Hill book. He is the former editor-in-chief of Digital News, former software editor of Computerworld and former technology editor of Interactive ... View Full Bio
We welcome your comments on this topic on our social media channels, or [contact us directly] with questions about the site.
Comment  |
Email This  |
Print  |
RSS
More Insights
Webcasts
The Failures of Static DLP and How to Protect Against Tomorrow's Email Breaches
How Elite Analyst Teams are Transforming Security with Cyber Reconnaissance
More Webcasts
White Papers
Cyber Threats & Trends: Jan-June 2020
The Insider's Guide to IP Geolocation Data During COVID-19
More White Papers
Reports
The Malware Threat Landscape
Special Report: Understanding Your Cyber Attackers
More Reports