Changes in IT: From the Trenches to the Future - InformationWeek

Learn how IT Leaders from Eversource Energy, Intel and Accenture Technology are looking at digital innovation - today and tomorrow.

IT leaders spend a lot of time mired in today's business and technology challenges while also keeping an eye on what's on the horizon. It's so important to watch for emerging technologies that could impact your organization in the next 5 years, too.

Today's keynotes at Interop 2019 in Las Vegas provided the complete picture, with two perspectives on future technologies from experts at Intel and Accenture, and a real-world view of how one IT organization worked through a giant merger, the introduction of cloud computing, and the technological and cultural issues that arise from these events.

It's an area of the country that can face significant outages when winter storms arrive, and when that happens it's "all hands on deck," according to CIO and Senior VP Kathy Kountze, who provided a real-world view from the inside the IT organization of a big utility during her keynote chat at Interop. 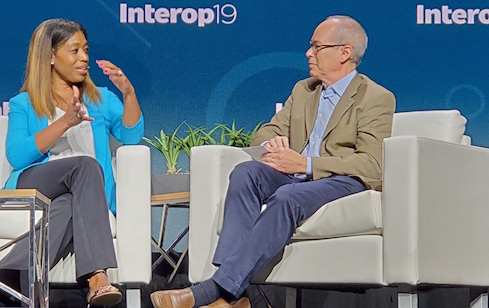 Among the big initiatives Eversource has underway are an effort to move to the cloud, rolling out new field devices for workers, and putting a greater focus on customer data and analytics. Like in a lot of enterprises, the cultural changes have been more challenging than the technological challenges.

"We have rolled out a significant number of mobile devices to our field force, which doesn't sound like a big deal except when you think of folks who have been doing things manually, and now you are giving them a piece of technology to do their jobs," she said. "It's been quite the effort around change management."

The company's cloud strategy, put in place several years ago, has helped move forward this and other initiatives around automation and modernization. Kountze said Eversource's cloud initiative was an easy decision for her, but it was very difficult from a cultural standpoint at a utility for others within the organization. A lot of people had favorite solutions that weren't part of the plan going foward.

"When we went through the significant merger (in 2012), it was an opportunity to go greenfield with some new solutions," Kountze said. "We had 2 and 3 of everything. We wanted to quickly get to one organization centralized; choosing SaaS solutions at that point helped us to move fairly quickly."

Eversource then moved to a platform-as-a-service model with the company website hosted on the Microsoft Azure platform. More recently, Eversource has moved to infrastructure-as-a-service, too, taking the company's "dormant" environments -- test, train, and dev -- to the cloud as well.

Finding IT talent remains a challenge. Eversource is competing against companies such as Google and Amazon in some cases, Kountze said. The company has partnered with third parties to focus on hiring high school kids right out of school or in their gap year before college. Eversource also hires interns in college and right out of college. Kountze said that you don't have to have a four-year degree to work in IT these days. Instead, she looks for candidates with two things -- motivation and emotional intelligence.

"If you have those two things and can present yourself as being strong in those areas, I'm confident you can be trained."

Utilities like Eversource are deploying more IoT devices today to monitor customer usage and equipment health. Brian McCarson, VP and senior principal engineer of the Industrial Solutions Division and IoT group at Intel, provided an overview of trends in IoT and the real work that needs to happen to move this technology forward.

IoT is fueling a data-centric transformation, from the "things" (as in Internet of Things) to the edge, to the network, to the cloud. Because there are multiple components in IoT, interoperability standards are essential.

"Standards are absolutely key, as are the consortia that helps to shape them," McCarson said during his keynote address at Interop.

That may be why there are so very many standards that exist today for IoT. For instance, there are IoT standards for multiple vertical industries, including home and building, manufacturing and industry automation, vehicular and transportation, healthcare, energy, cities, wearables, farming and agrifood, and telecommunications.

McCarson and his colleagues at Intel have written a paper about the importance of interoperability of realizing the potential of IoT with a concept they call "Rational Interoperability." The idea is that some interoperability is overkill. You don't need  your house's smoke detector to interoperate with a Boeing aircraft, for instance. Instead, organizations should focus on interoperability of trusted groups of devices or "things."

The future of connectivity

We are more connected than ever before, through sensors, GPS, social media, and more, said Michael Biltz, managing director of Accenture Technology Vision, during his keynote address at Interop. This moment where we've reached this level of connectedness is about to change the world.

"We are currently at a turning point on the technology front," Biltz said. The full Accenture Technology Vision is available here.

Given a choice between getting something now or waiting for it, we'll always chose getting it now, and companies are accommodating those choices. Yet, to get that, we have to give something up to them.

"When every company begins to shape these moments, we begin to see the emergence of a post-digital world where technology defines the fabric of our reality," Biltz said. "We are placing our lives, our homes, our families, into the hands of companies."

From Uber and Lyft to the nannycam you install to keep any eye on things, to research on everything from medicine to growing food faster.

This will have impacts that we don't yet understand. Company responsibilities will change because of this, Biltz said. Consider social media companies. For years they said they were just a platform and weren't responsible for the content.