0 comments
Comment Now
Tweet
Our survey shows polarized views on whether the government should let the deal go ahead.

Download the entire Apr. 4, 2011 issue of InformationWeek, distributed in an all-digital format as part of our Green Initiative
(Registration required.)

We will plant a tree for each of the first 5,000 downloads.

Following AT&T's $39 billion deal to acquire T-Mobile USA, InformationWeek Analytics research finds that the initial reaction among business technology professionals is to wait and see--unless they happen to be existing T-Mobile customers. For them, fully 77% say they'll be shopping around for a new mobile communications carrier. And while it's a good bet that many would remain with the new AT&T should the deal pass regulatory muster, you can also bet that Verizon and Sprint are cranking up their marketing engines to make certain that T-Mobile customers of all stripes are aware of their options.

Just 14% of our survey respondents say T-Mobile is their company's preferred North American mobile communications carrier. But it has been the most aggressive price competitor, providing a "foil against the duopoly pricing of AT&T and Verizon," says Berge Ayvazian, a consultant with market researcher Heavy Reading. Business customers won't like losing that leverage even if T-Mobile hasn't been a big part of their spending.

Business pros are polarized on whether the Department of Justice and FCC should allow the merger: 46% of our survey respondents think the regulators should nix it--a standout percentage, as our surveys rarely find so many respondents eager for this level of government intervention. Respondents worry that prices will rise with fewer competitors.

Ayvazian notes that the deal comes with a $3 billion breakup fee AT&T must pay T-Mobile's parent, Deutsche Telekom, if the merger can't be completed. Deutsche Telekom would also get rights to some of AT&T's wireless spectrum, so either AT&T has little doubt the deal will go through or it will do whatever it takes to get approval. 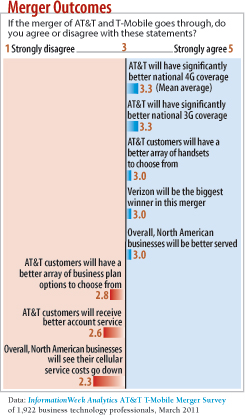 The merger isn't likely to come without conditions. While customers might like some kind of promise of lower rates, the discussion is more likely to center on coverage and bandwidth utilization. "I'm worried about the future," Ayvazian says. "We've spent the past 20 years promoting competition and benefiting from competition."

Business pros have plenty of other palpable reactions besides worry, with respondents to the free-form section of our survey using terms like "horrible," "absolute worst," "disaster," "larceny" (and a few more that civility prevents us from publishing) to describe their feelings about AT&T and its cellular and customer service. But the vitriol is far from universal. The glass-half-full types hope that innovative billing and other customer-care qualities they appreciate in T-Mobile will brush off on AT&T. But the real value AT&T is seeking isn't T-Mobile's friendlier pricing and customer service.

AT&T is well aware of its own coverage and quality problems, and its rollout of LTE (its high-speed, 4G data transport technology of choice) will further stress its network, which must remain backward-compatible with phones and other devices users have now. In some markets, buying spectrum is all but impossible, making acquisitions AT&T's only option. 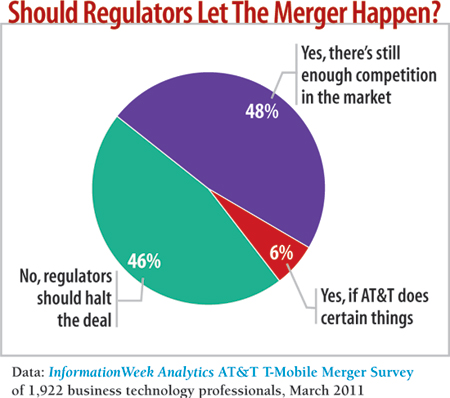 T-Mobile, instead of moving straight to LTE, had been pushing HPSA+, most recently to 42 Mbps in select markets--not quite 4G speeds, but well past 3G. "Each time T-Mobile has set the bar [on HPSA speeds], AT&T has had to match it," Ayvazian says. This deal would let AT&T focus on its LTE investment rather than have to match T-Mobile in HSPA+.

The problem is worse for T-Mobile, whose spectrum holdings would make a true 4G rollout using a technology like LTE very difficult without making obsolete existing users' devices. In many ways, the management of T-Mobile has orchestrated a perfect George Costanza moment for itself.

By rolling out enhancements to its HSPA technology, T-Mobile has been an early provider of 4G-like performance, but it has no clear path to wider coverage or higher speeds. As such, it's now taking a bow and selling to AT&T at the top of its game. (T-Mobile reportedly also was in merger talks with Sprint.)

Our data reveals that IT pros think the biggest benefit of the merger would be in better 3G and 4G service from AT&T (see chart, left). But at the same time, that's about their only positive expectation.

Survey respondents don't think business customers will get any more plans to choose from, nor are they confident customer service will improve. And they're convinced costs won't go down.

So will T-Mobile customers flee? No doubt AT&T thinks the long-term ramifications of the merger won't be as severe as our knee-jerk survey reactions indicate.

AT&T's research likely showed the same thing ours does: T-Mobile customers, particularly business customers, chose the carrier in the face of the accepted wisdom that only Verizon and AT&T are suitable business-class partners. The bottom line is that customers that made that choice either really like some aspect of T-Mobile service--such as more predictable data and voice performance in certain markets--or they really hate AT&T.

Become an InformationWeek Analytics subscriber and get our full report on the impact of the proposed AT&T and T-Mobile merger.

This report includes 20 pages of action-oriented analysis packed with 15 charts. What you'll find:
Get This And All Our Reports
We welcome your comments on this topic on our social media channels, or [contact us directly] with questions about the site.
Comment  |
Email This  |
Print  |
RSS
More Insights
Webcasts
SecDevOps: Tying Security to Your Application Development Processes
Using Artificial Intelligence, Deep Learning and Machine Learning for Cyber Defense
More Webcasts
White Papers
Cloud Threat Report: Spring 2020
When and How to Best Leverage an MSSP
More White Papers
Reports
The AI and Human Element Security Sentiment Study
A Reality Check for Cybersecurity Decision Makers
More Reports
Copyright © 2020 UBM Electronics, A UBM company, All rights reserved. Privacy Policy | Terms of Service