50%
Tweet
Jamiel's Shoes opened its doors the same year traffic first starting flowing across the Golden Gate Bridge. The year was 1937, and the Rhode Island-based, family-owned small business is the same store where many years later Karen Mills shopped for her children when they were young.

Jamiel's Shoes opened its doors the same year traffic first starting flowing across the Golden Gate Bridge. The year was 1937, and the Rhode Island-based, family-owned small business is the same store where many years later Karen Mills shopped for her children when they were young. 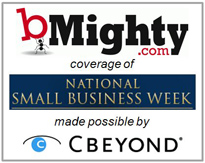 It's also the same shoe store that might not still be around today had it not been able to obtain a loan from the Small Business Administration, the agency over which Mills now presides. During her keynote address this morning at the National Small Business Week conference, talked about a new SBA loan designed for small businesses that need "a bridge over troubled water" -- their own private San Francisco Bay, if you will.

America's Recovery Capital (ARC) deferred-payment loans -- 100%-backed and interest-paid by the SBA -- provide up to $35,000 in "temporary relief" for viable small businesses that are in a major pinch. "Viable," Mills said, means "a small business with an established history of performances but needs help." The SBA Web site provided a few more details about eligibility; official guidelines, Mills said, are due out early June, with loans ready to roll through SBA lenders beginning June 15.

Mills also spoke about reinvigorating the SBA, citing two key areas within her agency that will benefit from increased investment: technology and human capital. Her plans include the automation of remaining SBA paper-based systems, a boost in bandwidth, and a new Web portal, all with the goal of making it easier for small businesses to work with the SBA. As for her own employees, they can expect increased training and expections to "give up their sacred turfs and communicate." The depth and breadth of the SBA network is truly extraordinary," she said. "We're not the backbone for small businesses -- we're the entire bone structure."

The rah-rahs you'd expect channeled through much of Mills' address -- "small business is the engine that will keep America strong" -- but as a former small business owner whose father was also an entrepreneur, they were heartfelt and charged with enthusiasm. Mills reaffirmed President Obama's commitment to getting credit back in the hands of small businesses, 70% of which have created all of the new jobs in the United States during the past decade. "We have a visible and vocal advocate in President Obama," she said. "The administration values the important of taking bold action, and the SBA is a key part of that."

Speaking of Obama, also at the top of Mills' agenda is implementing his economic stimulus package. "Average weekly loan volume is up more than 25% from before the Recovery Act," she said, citing a boost in the number of SBA 7(a) lenders and new loans (10,000) that have gone out since the legislation was enacted.

Sounds like a good start, but like a new pair of shoes, let's see how things hold up longer term.


We welcome your comments on this topic on our social media channels, or [contact us directly] with questions about the site.
Comment  |
Email This  |
Print  |
RSS
More Insights
Webcasts
Building and Refining Threat Hunting Practices in Your Enterprise
DevOps: Innovating with Speed, Security, and Quality
More Webcasts
White Papers
Wired vs. Wireless LAN Solution
2020 State of Malware Report
More White Papers
Reports
Online Threats -- and What Your Org Can Do About Them
[Special Report] Remote Network Management
More Reports