The company's unified communication launch includes a conferencing phone with a 360-degree camera.

Bill Gates is hoping to do to business phones what Microsoft did for the computer industry when it moved to PCs from mainframes 30 years ago -- improve the interface and link functions together. 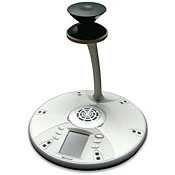 The software launch also included a $3,000 conferencing phone with a 360-degree camera called Microsoft RoundTable. Based on five-year-old technology from Microsoft Research called "ringcam," the device captures a panoramic view of meeting participants and includes sensors that can determine the speaker. The accompanying software can record meetings as well as interface with instant messaging clients from outside vendors.

The unified communication launches are designed to let customers integrate voice, video, and data with Microsoft's various business productivity software together as well as compete with other IP telephony providers such as Cisco Systems and Avaya.

Gates said Microsoft is poised to take advantage of a market that has shifted from a vendor-centric PBX era with vertically-integrated communications but lots of lock-in to a unified communication era with multiple vendors offering innovative phones and devices, developing interoperable applications, and is based around Microsoft's open communications software platform and industry standard servers and IT infrastructure.

"In fact this is happening as an evolution that can be put alongside the traditional PBX systems," Gates said, noting that "the long-term goal is to not rely on the PBX at all."

Gates also noted that the evolution is happening gradually such as the shift from typewriters to word processors.

"It will be a lot like the change to graphic user interface," Gates said during a presentation in San Francisco. "Some people didn't participate at first but eventually the technology became so ubiquitous that it was expected to work that way."

We welcome your comments on this topic on our social media channels, or [contact us directly] with questions about the site.
Comment  |
Email This  |
Print  |
RSS
More Insights
Webcasts
Architecting Security for the Internet of Things
Defense and Response Against Insider Threats & User Errors
More Webcasts
White Papers
Preparing to Secure the Intelligent Edge
Under the Hoodie 2020 Report
More White Papers
Reports
2021 Top Enterprise IT Trends
How Data Breaches Affect the Enterprise (2020)
More Reports