SAS announced new technologies, new efforts to expand its community, and support for new platforms including Hadoop at its SAS Global Forum in Washington D.C. on Monday. It's all part of a strategic effort to reach out to a next generation of analytics customers with very different expectations than current SAS customers.

The headliner among new technologies introduced is SAS Visual Statistics, a companion to the SAS Visual Analytics product the company introduced nearly two years ago. Where SAS Visual Analytics is a data-exploration and data-analysis tool geared to business analysts, Visual Statistics is aimed at statisticians and data scientists who want to get their hands on the data and the models so they can test variables and algorithms in order to optimize performance. Both products share the same visual, drag-and-drop style graphical user interface and both products run on the same powerful SAS LASR clustered, in-memory server.

SAS isn't planning to sunset its more traditional statistical tools, such as Base Statistics, but the combination of Visual Analytics and Visual Statistics will enable business analysts and deeper model developers to collaborate on the same data sets and share results. What's more, modelers can be more productive in a visual environment running on an in-memory cluster for fast, iterative analysis, according to SAS.

"With Visual Statistics running on LASR, you can have multiple statisticians collaborating on the same data sets and working on the same models," said Russ Cobb, SAS' VP of alliances and marketing, in an interview with InformationWeek. "They can also develop and test their models more quickly because visualization techniques let them see how their models are performing rather than relying on scoring."

SAS Statistics will be a bundled (meaning free) companion to SAS Visual Analytics starting in July. More than 1,500 customers have deployed Visual Analytics thus far, according to Cobb, and with the Visual Statistics upgrade, SAS expects to attract an emerging generation of data analysts.

"A lot of existing customers will migrate to Visual Statistics, but we're also expanding the SAS community because the workforce coming up out of undergraduate and graduate programs grew up with intuitive user interfaces," said Cobb. "They're not used to writing code, and they'll find Visual Statistics to be much more intuitive than our legacy products." 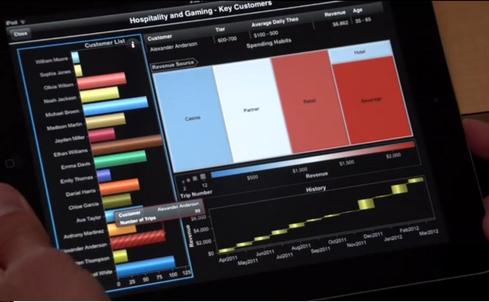 The SAS Visual Analytics interface as seen on an iPad.

"Some people still like to get catalogs, but since those are the most expensive pieces of material marketers tend to send out, they want to optimize the number they send out," said Cobb. If a marketer can spot segments of customers that are responsive to email or keyword campaigns, for example, they can send fewer catalogs to those customers and favor less-expensive electronic campaigns.

In another example of SAS' outreach to a new generation of data experts, the company announced it will redouble its support for SAS Analytics U, extending support to graduate and undergraduate programs promoting the study of analytics. SAS has long offered its software to colleges and universities at no charge, but it was delivered through hosted deployments. Software will now be downloadable onto student PCs so they can work with data in a disconnected model. The move is a response to the rising popularity of freely downloadable analytics programs based on the open source R programming language.

Doug Henschen is Executive Editor of InformationWeek, where he covers the intersection of enterprise applications with information management, business intelligence, big data and analytics. He previously served as editor in chief of Intelligent Enterprise, editor in chief of ... View Full Bio
We welcome your comments on this topic on our social media channels, or [contact us directly] with questions about the site.
Comment  |
Email This  |
Print  |
RSS
More Insights
Webcasts
Detecting and Preventing Insider Data Leaks
Nip Ransomware in the FUD: Detecting Attacks Pre-Encryption
More Webcasts
White Papers
Why Add Security to Your Skill Set and How to Do It
Enabling Enterprise Resiliency Through Cyberthreat Detection
More White Papers
Reports
Are We Cyber-Resilient? The Key Question Every Organization Must Answer
How Data Breaches Affect the Enterprise (2020)
More Reports

Who says real work doesn't get done on tablets? Not a lightweight tool: Noted.
Reply  |  Post Message  |  Messages List  |  Start a Board

SAS is methodical and started talking to customers about Visual Statistics more than a year ago. Lots of feedback went into it, so it's NOT a leightweight tool that only does a fraction of what data wonks are used to doing with more traditional tools, according to SAS. Visual Analytics is basically SAS's answer to Qliktech and Tableau, but now it has a Visual Statistics sibling that can drive analyses deeply into predictive analytics and optimization work.
Reply  |  Post Message  |  Messages List  |  Start a Board
Editors' Choice
Hot Topics

More Informa Tech Live Events
Zero Trust for a Work-From Home WorldCybersecurity's Next Wave: What You Should KnowStrategies for Success with Digital Transformation