Application developers are the biggest fans of MongoDB, but the vendor behind the product expects a major new release, announced Tuesday, to spread the love among database administrators, security experts, and those attempting to extract analytics from the NoSQL database management system (DBMS).

The new release, MongoDB 2.6, delivers significant improvements in scalability, performance, query planning, and security features as well as a step up in management functionality, according to the vendor. Now five years old, MongoDB is an open-source product that has seen 7 million downloads and hundreds of thousands of deployments. It's widely hailed as the most popular NoSQL DBMS available, but it does not have a reputation for high scalability, a count on which competitors Cassandra, Couchbase, and Riak shine.

MongoDB 2.6 upgrades user concurrency and connection pooling, so customers using "anything over a few dozen severs will see significant improvements in performance," according to Kelly Stirman, the company's director of product marketing. What's more, the company has introduced bulk operators for writes, so load, update, and delete operations are as much as five times faster than in the previous release, he says.

Taking first steps toward sophisticated query planning capabilities, the 2.6 release introduces index intersections to MongoDB, which makes it possible to avoid creating individual indexes or compound indexes for everything that you want to query.

"The more indexes you have to create, the more expensive it is to perform updates and other operations," says Stirman. "The ability to intersect indexes means developers don't have to do all the planning up front, and it makes the system more efficient in its use of resources." 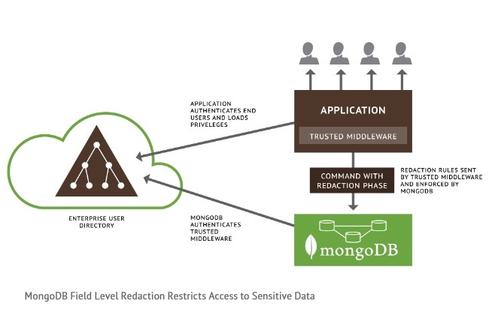 Field-level redaction is among a battery of security features
introduced in MongoDB 2.6.

Text search, previously in beta, is a built-in feature in the 2.6 release. Features include searching in 15 languages and an aggregation option that can be used to set up faceted navigation by product or color, for example, on an e-commerce website.

Database incumbents have been known to slam NoSQL security, but Stirman says MongoDB 2.6 delivers best-in-class security features including authentication, auditing, field-level redaction, and other features that meet or exceed the strictest standards of large organizations.

MongoDB is monitored and administered through the MongoDB Management Service (MMS), and the vendor is introducing backup and point-in-time recovery improvements with the 2.6 release. On the horizon is a wave of MMS automation features that will see public beta release in May. Automation will enable administrators to launch instances without coding and manage and upgrade existing deployments without taking them offline. Automated cloud support will start with Amazon EC2, but MongoDB plans to add OpenStack and IBM SoftLayer virtualization options. The automation features are expected to reach general availability within calendar year 2014.

"These automation features will provide power capabilities to quickly create and shut down MongoDB systems, so we want to be extremely conservative and make sure they're thoroughly tested in a public beta," says Stirman.

Emerging standards for hybrid clouds and converged datacenters promise to break vendors' proprietary hold. Also in the Lose The Lock-In issue of InformationWeek: The future datacenter will come in a neat package (free registration required).

In my interview, Stirman started by discussing all the MMS automation features, even though they won't show up until May and even then they'll be in beta. That suggests to me that system management is the squeakiest wheel where customer complains are concerned. MongoDB Management Service is also a source of revenue for MongoDB the company -- unless you use free, cloud-based MMS geared to startups and developers. When you take it into production or move a deployment online, it's time for subscription-based MMS.
Reply  |  Post Message  |  Messages List  |  Start a Board
Editors' Choice
Hot Topics