MongoDB is trying to silence its critics, please its customers, and look toward the future of database performance -- all with one software release.

The release in question is MongoDB 3.0, which was announced on Tuesday as is expected to be generally available in March. The two biggest improvements in 3.0 are a pluggable storage-engine architecture aimed at eliminating long-standing performance constraints, and new Ops Manager on-premises software, aimed at making it easier for customers to deploy and manage MongoDB clusters.

MongoDB is hands-down the most popular NoSQL database on the market, with more than 9 million downloads of its open-source software and more than 2,000 customers of its support services and commercial software. The database owes its popularity to its ease of development, but the product's incumbent storage engine, MMAP, presents performance limitations. Despite MMAP performance upgrades in 3.0, including finer-grained locking controls for better write performance, the storage engine is still best suited to read-intensive applications, such as database lookups and analytic queries.

MongoDB 3.0's new pluggable architecture addresses write-intensive applications, but that's just a start. The 3.0 release includes two new storage engine options. The first is WiredTiger, which was acquired (for an undisclosed sum) along with the company of the same name. WiredTiger supports write-intensive use-cases common in mobile, Internet-of-Things, smart-grid, log-file-analysis, and other modern applications.

"It has become incredibly inexpensive to create data with smart phones, messaging, smart grids, log files, and so on, and it's only natural that companies are trying to turn that information into money," said Kelly Stirman, MongoDB's director of products. "What these modern new apps have in common is that they're more write-intensive than read-intensive."

MongoDB is hoping that customers that previously switched to competitors, notably Cassandra, to handle these apps will now just switch to WiredTiger, which delivers seven to ten times better write performance than MMAP, according to Stirman. WiredTiger can also compress data up to 80%, which makes it a better choice than MMAP for archival applications.

The second new storage option in MongoDB 3.0 is called In-memory Experimental. As the name suggests, the engine is not recommended for production applications -- yet. At this stage the vendor is gathering customer feedback on low-latency use-cases such as ad serving, fraud detection, recommendation engines, and other use-cases demanding sub-millisecond response times.

MongoDB doesn't have formal release schedule for the in-memory technology. But depending on demand and the performance of the prototype, it could show up as early as the next point release, Stirman said.

Now that the pluggable architecture is available, MongoDB expects to make several more storage engines available. An HDFS engine, for one, could be used to store transactional data from the database to the Hadoop Distributed File System. Another possibility is supporting "mixed replica sets," an approach whereby multiple engines could be used simultaneously to support copies of data at different lifecycle stages. WiredTiger, for instance, could be used for transactional workloads, MMAP for analytics workloads, and WiredTiger (with compression) or an HDFS engine for low-cost archival needs. 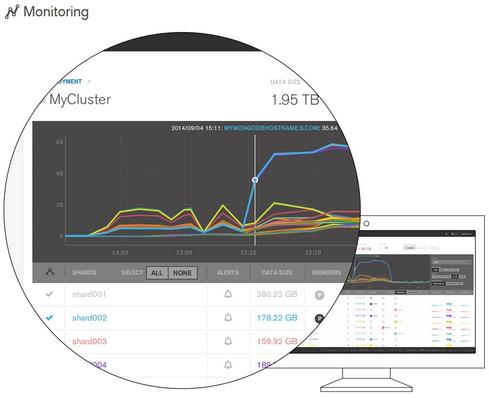 Cluster monitoring is just one of the capabilities on-premises Ops Manager software has in common with the MongoDB Management Service.

"Even in a moderate-sized cluster with 10 nodes, Ops Manager saves the DBA a huge amount of time," said Stirman.

Instead of logging into each machine and carrying out multiple administrative step manually, Ops Manager lets DBAs log in once and click a button to carry out multiple tasks across
clusters. The software also integrates with third-party IT-management systems, such as AppDynamics, NewRelic, Tivoli, and Docker, so administrators can handle everything from their accustomed tools.

With Tuesdays announcement, all MongoDB 3.0 release-candidate software is available for download and testing. MongoDB will spend the next several weeks gathering customer feedback and doing quality-assurance tests before deeming the software generally available for production use sometime in March.

Doug Henschen is Executive Editor of InformationWeek, where he covers the intersection of enterprise applications with information management, business intelligence, big data and analytics. He previously served as editor in chief of Intelligent Enterprise, editor in chief of ... View Full Bio
We welcome your comments on this topic on our social media channels, or [contact us directly] with questions about the site.
Comment  |
Email This  |
Print  |
RSS
More Insights
Webcasts
Building Asset Management into Your Enterprise Security Strategy
Data Center Network Operations (NetOps) Reimagined
More Webcasts
White Papers
Gartner: Hype Cycle for Security Operations
The Impact of the SolarWinds Breach on Cybersecurity
More White Papers
Reports
Dark Reading Report: Battle for the Endpoint
DNS Network Traffic Volumes During the 2020 Pandemic
More Reports