Microsoft SQL Server 2014 has been released to manufacturing, the company announced on Tuesday, promising general availability of the product on April 1. The company also announced the general availability of Hadoop 2.2 support in its Windows Azure HDInsight service, bringing support for YARN and Stinger (Hive SQL Query) improvements to the vendor's cloud-based Hadoop service.

Any release of Microsoft SQL Server is important, as it's the world's top database management system (DBMS) in terms of unit sales. But the 2014 update is particularly important as it introduces an In-Memory OLTP (online transaction processing) option that promises breakthroughs in performance.

[Want more on this performance enhancement? Read In-Memory Databases: Do You Need The Speed?]

As InformationWeek recently detailed in an in-depth cover story on in-memory databases, Microsoft beta customers have used In-Memory OLTP to get around disk I/O-throughput bottlenecks and read-write contention without rewriting applications designed to run on SQL Server. Gaming company Bwin.party, for example, used the feature to scale up an online sports-betting app to handle 150,000 bets per second that was previously limited to 12,000 bets per second. The only change required was moving selected database tables to run in memory.

Announced three years ago as project Hekaton, the In-Memory OLTP feature has been tested by dozens of companies working directly with Microsoft as part of its Technology Adoption Program. In addition, some 200,000 customers have downloaded or tested virtual instances of the DBMS as part of two Community Technology Previews that began last June, according to Microsoft.

The In-Memory OLTP option is far from the only enhancement delivered in the 2014 release. A hybrid deployment option gives customers the choice of running SQL Server 2014 on premises or on Windows Azure. A typical scenario envisioned is running production instances on premises while syncing with backup-and-recovery instances in the cloud. 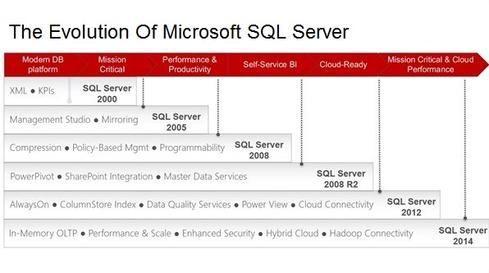 Faster transaction processing is clearly the biggest promise of Microsoft SQL Server 2014, and it's available to a huge installed base that won't have to make changes in applications or even in hardware, according to Microsoft. It's a claim that Microsoft customers including Bwin.party and Edgenet have validated in interviews with InformationWeek. Both customers took advantage of the In-Memory OLTP feature on existing servers, though Microsoft has said that extensive use of the feature might require upgrades in available memory.

SAP Hana has been the poster child of the in-memory movement in recent years, but that platform runs entirely in memory, so it demands all new servers as well as modifications to applications that were designed to run on other databases. Where Hana had to start from scratch without a legacy installed base (and now has around 1,000 customers), Microsoft has a built-in head start on in-memory adoption with hundreds of thousands of current SQL Server customers.

Microsoft's announcement of Hadoop 2.2 support in its Windows Azure HDInsight service comes as little surprise, as the Apache open source improvements were released last fall. Hortonworks and Cloudera announced their releases built on 2.2 in October and February, respectively, and Pivotal jointed the club with its Pivotal HD 2.0 release on Monday. Microsoft and its partner Hortonworks, the developer of HDInsight, will undoubtedly follow up with an updated on-premises software distribution within a matter of days or weeks.

Doug Henschen is Executive Editor of InformationWeek, where he covers the intersection of enterprise applications with information management, business intelligence, big data and analytics. He previously served as editor in chief of Intelligent Enterprise, editor in chief of ... View Full Bio
We welcome your comments on this topic on our social media channels, or [contact us directly] with questions about the site.
Comment  |
Email This  |
Print  |
RSS
More Insights
Webcasts
Making XDR Work in Your Enterprise - May 12
Multi-Cloud Data Management for Modern Applications
More Webcasts
White Papers
Improve your business with a Virtual CISO
2020 Digital Transformation Report
More White Papers
Reports
The State of Cybersecurity Incident Response
Key Strategies for Managing New Risks in Cybersecurity
More Reports

In-Memory OLTP is a standard feature, not an extra-cost feature. It's an "option" in that it's there if you need it, but you don't have to put tables into memory if you don't need that acceleration.

This is a big step forward in Microsoft's database capabilities. The ability to use SQL Server on premises and synch with a version of SQL Server in Azure will spur Azure use.
Reply  |  Post Message  |  Messages List  |  Start a Board

Doug, Any word on cost? Is Microsoft going to provide the in-memory capability in the standard release, or will customers need to pony up for higher-end versions?
Reply  |  Post Message  |  Messages List  |  Start a Board

Microsoft's Quentin Clark tells me that some customers have used In-Memory OLTP tables in a high-scale caching role (think Memcached) whereby a in-memory table is used for high-scale, high-speed ingest. In this role it acts as a kind of data shock absorber where data can be buffered, transformed and delivered to a variety of applications and analyses. I'm sure there will be many novel implementations of in-memory tables that Microsoft never envisioned.

I'm sure this release also will heat up the ongoing market-share battle with Oracle. Microsoft SQL Server gained front-runner status in terms of unit sales many years ago. Clark tells me the latest stats from IDC show that SQL Server recently eclipsed IBM DB2 in terms of software revenue market share among DBMSs.

Microsoft is counting on lower SQL Server costs to win the day against Oracle Database. Oracle points to scalability and industrial-strength perfomance, but Microsoft's new In-Memory OLTP option will help on that score. Stay tuned, though, as Oracle is epected to introduce its own in-memory capabilities this year. This was pre-announced at Oracle Open World last year, but this year expect beta product announcements at OOW 2014 and general release late this year or early next year.

Great context here, Doug. The point re SAP Hana is not lost on customers, either, I'm sure.
Reply  |  Post Message  |  Messages List  |  Start a Board
InformationWeek Is Getting an Upgrade!