Microsoft maneuvers to keep Office on top, touting data analysis power, tweaking office 365, and more. What do the moves mean to you?

Microsoft Office is the default choice for many people thanks to its ubiquity, and the only serious option for those who need the deepest toolsets; it remains, in short, the productivity standard.

Even so, Office is costly and not available on all popular platforms. Many consumers, mobile-oriented users, and even some businesses have turned to free alternatives such as Google Docs, iWork, and OpenOffice. These options can't match Office's features, but if you're not a power user, why pay for a product when free ones are good enough?

Microsoft has combatted its freebie competition in a variety of ways. Office 365 represents a major shift from standalone licenses to cloud-based subscriptions. The approach allows Microsoft to continually push new features, which has resulted in more collaborative, agile, and data-adept Office products. It also turns customers into potentially perpetual revenue streams, something that can't be said of all those Office 2003 licenses floating around. At the same time, it can lower a company's IT costs due to the cloud's economies of scale. Microsoft's productivity line also includes Office Online, which is its browser-based response to free competitors, and new cross-platform products, most notably Office for iPads.

In the last week, Microsoft has made some strategy and feature announcements that affect many of its Office products and are designed to appeal to everyone from data-crunching enterprise users to casual consumers. Will they give Office a boost? Let us know what you think in the comments section. 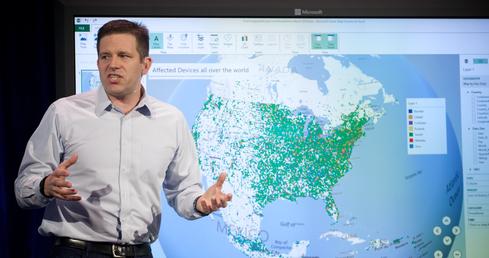 Businesses are collecting more data than ever, and as Internet of Things-themed technologies become more common, that data will grow at an exponential rate. Microsoft products can tie together SQL, Azure, Hadoop, and other tools to wrangle the data on the back end, and Nadella sees Office as the user-facing portal through which data is displayed and insights derived. Microsoft reps demonstrated how columns and rows in Excel can be translated into dynamic maps and graphs, sometimes in response to natural language queries. Nadella's message was that data should be accessible and useful to everyone, not just to data scientists, and that Microsoft wants Office to be the vehicle that democratizes the tools.

2. Office 365 Personal goes live.
Announced earlier this year, Office 365 Personal subscriptions are now available. Aimed at individuals, the product entitles the user to Office on one Mac or PC and one Windows-based tablet or iPad. Microsoft has confirmed that native Office apps for Android are in the pipeline, and Office 365 Personal will presumably cover these products as well.

Office 365 Personal has been widely interpreted as an enticement for iPad owners. Office iPad apps offer basic features for free, but to create and edit documents, a 365 subscription is required. 365 Personal subscribers get not only the newest Office software for $6.99 per month or $69.99 annually, but also 20 GB of OneDrive cloud storage. Microsoft still sells Office 365 Home

I think it depends how you define "superior."

I'll conced I don't know OpenOffice as thoroughly as I know Office. I also concede this: Where there's feature parity, OpenOffice might be the superior option. But there isn't feature parity across the board, especially if you're interested in Office 365-specific cloud benefits, as opposed to features within individual apps. And that's to say nothing of Power BI and the whole "UI for data" plan.
Reply  |  Post Message  |  Messages List  |  Start a Board

"With storage dirt cheap, 64 GB USB stick for less than $25.00, who needs cloud storage??  Why use the CLOUD - so NSA and others can snoop/meta through all your documents?!  Word and Excel on a large screen cell phone or tablet?  No thanks.  If I'm going to do some productive work - it will be on a 102-key keyboard, mouse and a screen to show more than 4x6 cell area.  All the CLOUD hype is just that - hype by storage vendors such as Google, MS and others to make us pay them to store data we want to save."


Personally, I find Office 365 useful. Depending where I'm writing (office, home, train, hotel room, at a conference, etc.) and how mobile I need to be, I use different devices, and Office 365 a great help. But I think your point illustrates Microsoft's challenge.

While I like Office 365, I can appreciatre why some within Microsoft's enormous pool of customers are upset. I think it's easy hyperbolize some of the cloud security risks, but it's still a consideration. And at a more basic level, a lot of people are perfectly happy with regular standalone versions, and they feel (with some merit) that Microsoft is using its pricing and upgrade policies to force them toward subscriptions (though, as mentioned in the article, some benefits come along with that). Microsoft is attempting to execute a large, fundamental change relatively quickly, and it's rocked the boat with some longtime cutomers. Tensions among longtime Windows users get a lot of attention, but some Office customers aren't thrilled either.
Reply  |  Post Message  |  Messages List  |  Start a Board

Nicrosoft office for the iPad.

Microsoft office for the iPhone.

Microsoft office for all your tablet needs.

All of this is online. All of this passes through the internet. Any business that uses this stuff is basically exposing all their company secrets to the NSA , which has already been caught a few times engaging in corperate espianoge to make sure USA companies win any bid, because they can force USA companies to act as spies for them (homeland security act) .

Buy our products ! If you're not based in the usa , we will bankrupt you ! We will make sure your USA competition wins any bids !

MS keeps changing Office for the sake of change so they can sell new products.  The UI change from 2003 to 2007 and onward is stupid - commands as pictures for the masses as if we, the users, don't understand what we were doing.  Access lost much of its usability, agility and security features.  Power users use shortcuts and right-mouse click; not opening a command tree.  With storage dirt cheap, 64 GB USB stick for less than $25.00, who needs cloud storage??  Why use the CLOUD - so NSA and others can snoop/meta through all your documents?!  Word and Excel on a large screen cell phone or tablet?  No thanks.  If I'm going to do some productive work - it will be on a 102-key keyboard, mouse and a screen to show more than 4x6 cell area.  All the CLOUD hype is just that - hype by storage vendors such as Google, MS and others to make us pay them to store data we want to save.  I have 3 TB of storage, and backup for it.  I will never fill it up with Word, Excel and other Office programs data!  Also, we are being conditioned to not being able to exist without online connectivity just like what happened with cable.  We got lured in with movie channels, sports and such - now we pay premium rates for what used to be programming supported by advertising - and still get the advertising!!  I want to be able to do all that I used to do, pre pay-365-days-a-year-Office, off line!!!
Reply  |  Post Message  |  Messages List  |  Start a Board

Actually with six different modules, Apache OpenOffice is superior to MS Office.  To say otherwise indicates an unfamiliarity with the suite. And not only is it 100% free but there is a vast world of template and usage resources available from the open source community.
Reply  |  Post Message  |  Messages List  |  Start a Board

You highlighted the crux of the matter - the wide ecosystem and the Enterprise. At work I'll be on MS for the foreseeable future. At home I can put together a system with little to no software expense using Linux and open source software. And for those purposes it will satisy most of my requirements.

That said, my recent experience with Linux tells me it's nowhere near ready for the home user, beyond the enthusiast (let alone the workplace), but the applications are available now - so I can use them and discover the little things they do well, sometimes better than MS products, and usually with a lot less overhead.

I think "power vs. expense" nicely sums up Microsoft Office vs. competitors. If you need a deep feature set and wide ecosystem, Office boasts clear advantages. Its wide user footprint is also a monumental advantage in the enterprise. But if you value cost, simplicity of use, or other attributes, some of the other options are more than good enough-- which is why some of them have eaten into Office's market share, albeit mostly modestly.
Reply  |  Post Message  |  Messages List  |  Start a Board

I agree that MS is moving in the right direction, but for what most users need (myself included 99% of the time), LibreOffice is fine and does a great job. It may not do everything, but Excel is the main area that the free suites fall short on, and that's probably only an interoperability thing - as with VB for the macros.

So I keep an old copy of Office on hand, which so far has managed it well enough. (I'm sure in the future it won't, but by then I hope to be completely off MS products.)


I like that MS is making office available on other platforms. Making it available to Ipad users is a great move. I believe if you have a corporate Office 365 plan you can run office on Ipads with no additional cost.

Having recently purchased a new laptop with win 8.1, I was impressed with some of the 365 capabilities and integration. Things that used to drive me nuts about office products (price and resource usage) are becoming less annoying. Not that I'm a MS fanboy, but I think they are starting to innovate again. This is the first major player to integrate their products in the cloud. If it works (and all signs indicate yes) we could be seeing a major paradigm shift in software . MS was late to the table but I think with 365 they are getting it right on the first try.
Reply  |  Post Message  |  Messages List  |  Start a Board
Editors' Choice
Hot Topics