In much of the developing world, data collection is still a pen-and-paper affair. Healthcare workers in remote villages of Africa, for instance, travel door-to-door with clipboard in hand to collect information on disease outbreaks, childbirths, deaths, and other important events.

That's changing, however, in no small part to the rapid adoption of dirt-cheap cellphones -- some costing as little as US$5 -- in regions where the price of an Apple iPhone 5S or a Samsung Galaxy S5 exceeds a family's annual income. Using data-collection software from companies such as Magpi, survey takers can collect information using technologies as "ancient" as SMS messaging.

"What we're replacing is the person walking around with a paper form on a clipboard," said Magpi CEO and cofounder Dr. Joel Selanikio in a phone interview with InformationWeek. "Laptops don't work well in those situations because quite often you don't have a desk to put them down on."

[Should everything be connected to the Internet? Read Internet Of Things: Limitless Dumb Possibilities.]

Magpi, which recently changed its name from DataDyne, was launched in 2003 by Selanikio and Rose Donna, a former project manager for the American Red Cross. Using their extensive experience in global health and development issues, the pair developed EpiSurveyor (now Magpi), a mobile data collection app that enables a user with a wireless connection to collect information quickly -- a boon to health workers in remote areas.

"Way back in the early 2000s we started off with a Palm Pilot app," said Selanikio. "Obviously, there was no connectivity involved there. As soon as mobile phones began to get popular in the places we were working, like Southeast Asia and Africa, we moved to what was then by far the most popular [mobile] platform, which was Symbian. We've got lots of users who are still using our Symbian app." 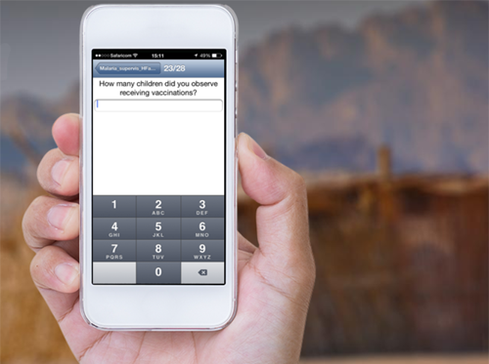 Magpi now has Android and iOS apps, and has just released version 2.0 of its data-collection software. It's expanding beyond its traditional nonprofit user base, too.

"The nature of the service we provide, which is a general mobile data collection system, is usable for many things besides healthcare and international development," Selanikio said.

Magpi fills a need for mobile data collection that isn't being met, at least not particularly well, in the commercial sector, he added.

For instance, a natural gas exploration company in Australia uses Magpi to fill in safety checklists at drilling rigs.

He added: "If you're trying to collect data for people who are sitting at a Web-connected desktop or laptop, you've got SurveyMonkey."

But things are less advanced out in the field, even in developed cities such as Washington, where Magpi is headquartered. "If I walk around the block in Washington, D.C., I am bound to find at least a few people walking around with paper forms and a clipboard, whether they're doing political polls or are at a construction site," Selanikio noted.

Again, that's changing. In the developing world, for instance, the rise of low-cost smartphones is enabling mobile data collection in areas that until recently were limited to a clipboard-and-paper solution.

Surprisingly, there's still a tremendous amount of functionality in SMS. "Although SMS is quite limited in its capability, it runs on any mobile device," Selanikio said. "We've seen our users, by using something as simple as SMS, experiment with getting data that was never before getable from the field."

Magpi's work with for-profit companies allows it to subsidize its ongoing work with nonprofits. "It's an unusual business model and it's pretty exciting," said Selanikio. "I don't know of anyone else who's doing it."