IBM announced Monday that it intends to acquire Cloudant, a database-as-a-service (DBaaS) provider that delivers the open source Apache CouchDB as a service. IBM described it as a cloud services boost and a serious foray into the NoSQL database management system (DBMS) market, but it's not quite clear how CouchDB stacks up against better-known competitors.

IBM said it's buying the privately held, Boston-based Cloudant to help companies exploit big data, cloud, and mobile trends. The terms of the deal were not disclosed, suggesting it was a small acquisition. IBM touted Cloudant's scalable, JSON-conversant database service as the right tool for the times, citing its simplicity, scalabilty, and open source credentials as key attractions to web- and mobile-app developers.

"Cloudant is delivered as a service, so developers don't need to be database experts or administrators, and they don't need to know where the data is going to live or how it's going to scale," said Sean Poulley, IBM VP for databases and data warehousing, in a phone interview with InformationWeek. "If you look at the challenges people have with mobile and web apps, they struggle with how they can build them quickly and how they build them for unpredictable levels of scale."

Cloud service delivery is one competitive axis of this deal, and here IBM competes with the likes of Amazon Web Services (AWS) and Rackspace. Cloudant gives IBM a DBaaS option that's already running on Softlayer, the company IBM acquired last year for $2 billion and has since invested another $1 billion to expand on Softlayer infrastructure as the backbone of IBM cloud services.

The DBMS beneath Cloudant's service is the second competitive axis of this deal, but CouchDB is seldom mentioned in the same sentence as NoSQL leaders such as MongoDB, Cassandra (and support provider DataStax), and Couchbase. Nonetheless, IBM's Poulley insisted that Cloudant and its BigCouch service based on CouchDB offers better offline data synchronization for mobile apps than MongoDB does. And in highly distributed, global deployments, Poulley says Cloudant offers clustering and load-balancing capabilities that "aren't particularly obvious" in alternatives, though these are hallmarks of Cassandra and Couchbase.

"You can find some of the things you would find in Cloudant in some of those contenders, but we found that nobody has the full set," Poulley elaborated. "Mongo, we don't think, has the speed of execution or scalability of Cloudant. And there are services capabilities built into Cloudant that are missing in Couchbase, like the ability to do continuous, rolling updates without taking the service down." 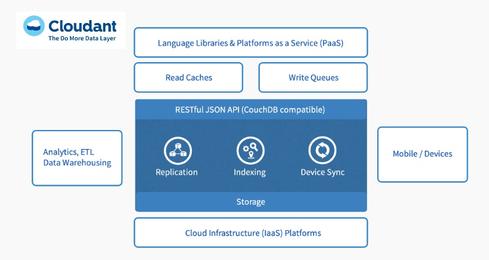 Executives at MongoDB and Couchbase scoffed at the suggestion that IBM is making a serious play for the NoSQL market counting on CouchDB. "I don't think the Cloudant acquisition has anything to do with CouchDB," said Matt Asay, MongoDB's VP of marketing, business development, and corporate strategy. "I think it's really about building out database-as-a-service infrastructure on which they will end up deploying several different databases."

Asay is undoubtedly hoping that MongoDB will be one of the databases supported in IBM's cloud. Last year, IBM struck up a partnership with MongoDB to support its wire protocol and query language for mobile applications, and it's even shipping MongoDB software along with its WebSphere application server.

The IBM-Mongo partnership is another reason why Bob Wiederhold, CEO of Couchbase, doubts IBM is really counting on CouchDB. "If they're going to put a lot of resources behind CouchDB, that's a direct, competitive threat to their relationship with MongoDB," Wiederhold told InformationWeek. "They're buying a very small company that has struggled to keep up, from a NoSQL database technology perspective, with leaders like MongoDB, DataStax, and Couchbase."

Even where cloud competitors are concerned, CouchDB has its drawbacks as an answer to Amazon's DynamoDB. Poulley touted the availability of Apache CouchDB software as assurance that customers can take Cloudant deployments on-premises if they choose, whereas DynamoDB is a proprietary service that's only offered in the cloud. But Cloudant is the only commercial company offering support for CouchDB, and it doesn't offer on-premises software or support options. (Couchbase used to support CouchDB, but that was before it developed its current, completely separate product.) Will IBM step in and provide an on-premises support option?

"We haven't yet developed a plan for an on-premises alternative to Cloudant," said Poulley, but he didn't rule out a future step. "We think [the cloud] is a better place to start, but that doesn't mean we won't bring a NoSQL variant of Cloudant into an on-premises environment."

As recently as last summer, Bob Picciano, recently appointed senior VP of IBM's new Information and Analytics Group, was rather dismissive about NoSQL capabilities in an interview with InformationWeek, and he touted the JSON-data-handling capabilities of DB2. Enthusiasm has apparently grown, as Poulley said NoSQL "has its place" in web and mobile apps. IBM is "absolutely investing in NoSQL, whether it's in BigInsights [IBM's Hadoop distribution incorporating HBase] or what we're doing here with JSON and Cloudant."

IBM has made it clear that the Cloudant deal is about much more than adding DBaaS infrastructure. But in order to win in NoSQL, the company is going to have to clarify its strategy and put its weight behind one product, as Oracle has done with the Oracle NoSQL Database. Buying Cloudant to address NoSQL is not on par with buying Cognos to get into business intelligence, SPSS to delve into advanced analytics, or Netezza to add a high-scale, massively parallel processing database. It's a tuck-in deal trying to fill big shoes.

Doug Henschen is Executive Editor of InformationWeek, where he covers the intersection of enterprise applications with information management, business intelligence, big data and analytics. He previously served as editor in chief of Intelligent Enterprise, editor in chief of ... View Full Bio
We welcome your comments on this topic on our social media channels, or [contact us directly] with questions about the site.
Comment  |
Email This  |
Print  |
RSS
More Insights
Webcasts
What We Can Learn from Sports Analytics
How Elite Analyst Teams are Transforming Security with Cyber Reconnaissance
More Webcasts
White Papers
A Technical Deep Dive on Software Exploits
5 Steps to Zero Trust in the Data Center
More White Papers
Reports
2020 State of DevOps Report
DNS Network Traffic Volumes During the 2020 Pandemic
More Reports

Not to be snarky, but you're surprised somebody forgot to mention Informix?
Reply  |  Post Message  |  Messages List  |  Start a Board

Hi Doug, Thanks for the detailed article. I think someone forgot to mention... The MongoDB/JSON capabilities are in IBM Informix as well.  And with Informix, it's more than simple JSON/BSON datatype -- In addition to MongoDB compatibility (via storage), Informix enables the complete hybrid app/API between relational and JSON data from SQL and MongoAPI.

While Cloudant's work on scaling will be greatly appreciated by the Apache CouchDB community, we have yet to see an Apache CouchDB release that it includes it. Thus, it has yet to be proven by the community.
Reply  |  Post Message  |  Messages List  |  Start a Board

I agree with Matt Asay that IBM buying Cloudant is about getting the means to build out database as a service, on which many services will eventually be offered.
Reply  |  Post Message  |  Messages List  |  Start a Board

Given that IBM has a partnership with MongoDB and also touts the JSON capabilities of DB2, all the boosterish language around CouchDB is a bit confusing. But it is IBM and could easily pump a lot of investment into CouchDB to make it a bigger name in NoSQL than it is today. NoSQL competitors are hoping this is more about delivering database services and all the posturing will fade as IBM builds out multiple database services.
Reply  |  Post Message  |  Messages List  |  Start a Board
Editors' Choice
Hot Topics