Hortonworks, the Hadoop-distributor spinout of Yahoo!, files with the SEC to launch an initial public offering of stock in 2015.

How hot is Hadoop? The top three distributors of the software have collectively landed $1 billion in venture capital in 2014 alone. Now Hortonworks, the second-largest Hadoop distributor, has filed for an initial public offering to take place next year.

News of Hortonworks' impending IPO first surfaced on Forbes on Monday, accompanied by the kinds of insider financial details that private companies never share until they're forced to as part of the IPO process. Hortonworks' filing revealed that it had revenue of $11 million in 2013 while losing more than three times as much, $36.6 million, on operations. The losses-to-revenues ratio improved marginally in the first half of 2014, with Hortonworks losing $86.7 million on revenues of $33.3 million.

Losses aren't unusual for a three-year-old tech startup, but then Hortonworks is not your typical startup. For starters, Hortonworks was spun out of Yahoo in 2011 and launched with more than 50 employees from that organization. Secondly, Hortonworks is developing, distributing, and supporting Hadoop, the buzziest platform in the high-profile big data movement.

Hortonworks is valued at more than $1 billion, which is good news for investors including HP and Blackrock, which together led a $150 million investment round earlier this year. Hadoop market leader Cloudera has accumulated even more cash, having won a $740 million investment from Intel in March to buy 18% of the company this summer. MapR, the third largest Hadoop distributor, landed a $110 million venture infusion this summer, led by an $80 million investment by Google Capital.

Why are Hadoop vendors so highly valued? Just last week, influential analyst firm Forrester Research declared in a report that Hadoop is "no longer optional" for large enterprises because "Hadooponomics" -- the ability to linearly scale both data storage and data processing -- has made a compelling case for the big data platform. 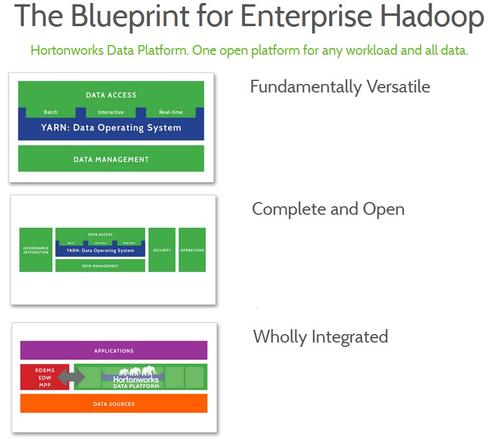 What has yet to be determined is just how most enterprises will analyze the data within Hadoop, whether through proprietary tools and databases supplied by legacy data-management vendors, or through open source tools and projects offered through a new generation of vendors.

Hortonworks has vowed to stick entirely with open source software options, making training, support, and software development for partners such as HP, Microsoft, SAP, and Teradata its primary sources of revenue.

Doug Henschen is Executive Editor of InformationWeek, where he covers the intersection of enterprise applications with information management, business intelligence, big data and analytics. He previously served as editor in chief of Intelligent Enterprise, editor in chief of ... View Full Bio
We welcome your comments on this topic on our social media channels, or [contact us directly] with questions about the site.
Comment  |
Email This  |
Print  |
RSS
More Insights
Webcasts
Building Asset Management into Your Enterprise Security Strategy
Take DevOps to the Next Level
More Webcasts
White Papers
Gartner: Hype Cycle for Security Operations
2021 Application Security Statistics Report Vol.1
More White Papers
Reports
Tech Insights: Detecting and Preventing Insider Data Leaks
Building the SOC of the Future
More Reports

Some of the best early work on Hadoop was done at Yahoo and was contributed to the Apache project. Part of that core group there is now in HortonWorks, with the exception of Doug Cutting, who joined Cloudera.
Reply  |  Post Message  |  Messages List  |  Start a Board

Hortonworks partner and customer Teradata is another big investor, holding about an 8% equity stake in the company.
Reply  |  Post Message  |  Messages List  |  Start a Board

Hortonworks gets the nod for striking while the iron is hot. Perhaps Cloudera is counting on Hadoop getting even more valuable? I think the basics of Hadoop as a storage layer/data hub/data lake will get even more commoditized that we're already seeing. There are plenty of data-processing and data-analysis options on top of this platform, starting with not-so-good-old MapReduce and Hive, but also including emerging open-source (or pseudo open source) options like Spark, Storm, Impala, Tez, Drill and so on. Then there are the commercial-vendor offerings like On-Hadoop or nearly on-Hadoop analysis engines from HP, IBM, Microsoft, Oracle, Pivotal and others.

The value is in the analysis, so keep your options open and experiment until you're sure your happy with the breadth of analysis and performance before committing too much.
Reply  |  Post Message  |  Messages List  |  Start a Board
InformationWeek Is Getting an Upgrade!