Using Data To Fight Wildfires: An Inside Look
(Click image for larger view and slideshow.)

The Ultimate Fighting Championship, commonly known as the UFC, currently hosts 48 live mixed martial arts events annually around the world. The fights are big business -- made better by big data.

"We are recording every second of those fights," said Jeff Quinn, IT director for the UFC, in a phone interview.

The fights can be short. Ronda Rousey's August 1 match with Bethe Correia in Rio de Janeiro lasted only 34 seconds. But in the world of pay-per-view television, when the UFC buys a three-hour block of time, it has to fill the space.

"If we do have a fight that goes uniquely short, we've got the undercard we can use to fill in the gap," explained Quinn.

So a typical fight card includes 10 to 15 bouts with different fighters. Each event takes about six to seven hours to produce. Every second of fighting is captured with the help of 30 different cameras. Additional cameras document what's going on backstage. The result is a lot of data.

About three years ago the UFC moved to a tapeless work flow, which avoids the delay of intermediate encoding and helps the organization turn its content around as quickly as possible. "We're taking all the feeds from those cameras and doing an on-site encode of those files into our native file format and storing it to [RAID] hardware packs," said Quinn. 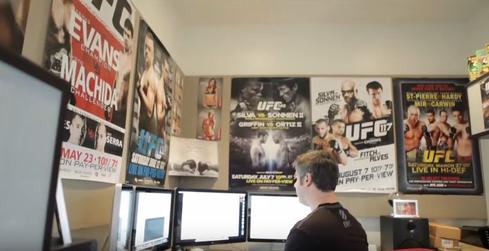 The organization stores its video files in the ProRes 422 format, which requires about 145 Mbps or 18.1 MBps of storage for HD video. That's roughly 1 GB per minute. In all, the UFC's production team captures somewhere between 10 TB and 15 TB of video data per event.

The UFC had been ingesting its content into its digital asset management system and moving it into long-term storage on Linear Tape-Open (LTO) drives. But there's a limit to the speed at which data can be recalled from an LTO tape. To reduce that bottleneck, about 18 months ago the UFC turned to Quantum's Lattus system to store its content. The cloud was not an option.

"We decided to go with an owned, in-house solution, at initial investment of about five-and-a-half petabytes of storage," Quinn said. "What three years ago used to take almost 30 minutes (to export a 15-minute fight from our tape environment for one single camera angle), in our Lattus environment takes us roughly 30 seconds."

Quinn said that for the scale required -- enough to store and rapidly recall 50,000 hours of mixed martial arts content -- the UFC need something extremely robust that could also handle its bandwidth requirements. "Our mezzanine files for a given fight can climb up to 300 TB to 400 TB in size, and if we needed to export that, that's where the big name cloud providers would start to fall a bit short," he said.

Storing so much data in the cloud would also add to the UFC's operational expenses through high bandwidth costs. "We would have had to support some extremely high-capacity connectivity, going to 10 gigabytes per second and beyond, in order to move our files around at the pace we needed," said Quinn. "Our biggest challenge is to take all that content and monetize it as fast as possible."

Time is money, particularly for the UFC.

Thomas Claburn has been writing about business and technology since 1996, for publications such as New Architect, PC Computing, InformationWeek, Salon, Wired, and Ziff Davis Smart Business. Before that, he worked in film and television, having earned a not particularly useful ... View Full Bio
We welcome your comments on this topic on our social media channels, or [contact us directly] with questions about the site.
Comment  |
Email This  |
Print  |
RSS
More Insights
Webcasts
What We Can Learn from Sports Analytics
The Failures of Static DLP and How to Protect Against Tomorrow's Email Breaches
More Webcasts
White Papers
Zero Trust Evaluation Guide
The 2020 Duo Security Trusted Access Report
More White Papers
Reports
Building an Effective Cybersecurity Incident Response Team
DNS Network Traffic Volumes During the 2020 Pandemic
More Reports

"Our biggest challenge is to take all that content and monetize it as fast as possible." That really should be both the challenge and driver for any big data initiative. All data has value and its a matter of being able to accurately analyze whats at your disposal and ultimately find ways to monetize its use. Peter Fretty, IDG blogger working on behalf of SAS
Reply  |  Post Message  |  Messages List  |  Start a Board

This is a great article. It's fascinating to read about a case where building solutions in-house makes the most sense. It would be even more interesting to learn about third-party vendors that think they could have delivered what the UFC needed.
Reply  |  Post Message  |  Messages List  |  Start a Board

An case study on when cloud storage wouldn't work or be cost effective. The main issue is the cost of large pipes for data transmission. And of course there's a cost for data export
Reply  |  Post Message  |  Messages List  |  Start a Board