50%
Tweet
IBM, Google, HPE, Dell, and others have combined resources to promote the OpenCAPI standard, which aims to boost the performance of data center servers tasked with analyzing large amounts of data.

Applications analyzing machine data, a busy website's traffic, or big data want to drink that data from a firehose, not a straw. For that, IBM, Google, and partners have launched OpenCAPI, the open source Coherent Accelerator Processor Interface.

Intel's traditional x86 architecture started out as the basis for personal computers and has been adapted for use in servers. But its data handling characteristics didn't envision needs that would be generated through e-commerce, web, and data analysis systems.

The OpenCAPI standard is aimed at counteracting those limitations.

It allows accelerator boards to be linked to a server's CPU and main memory, and move data at high rates of I/O between them. The result is a server architecture that's been modified enough to move data at up to 10X its previous speeds, a spokesman for the newly formed OpenCAPI Consortium said during the Oct. 14 announcement. 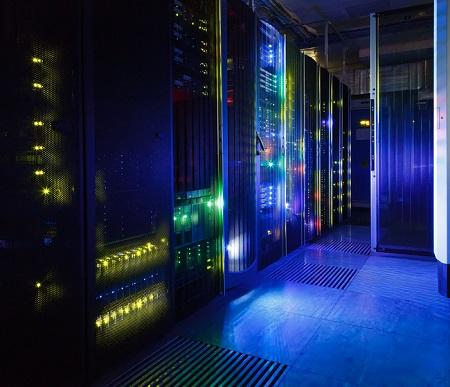 "This data-centric approach to server design, which puts the compute power closer to the data, removes inefficiencies in traditional system architectures to help eliminate system bottlenecks," according to the announcement.

Among the consortium founders are Dell EMC, AMD, HP Enterprise, IBM, and Google. Other founders include:

Noticeably absent from the consortium is Intel, the dominant supplier of x86 server architecture.

By producing OpenCAPI and illustrating an ecosystem around it, IBM and the other hardware manufacturers are potentially enlarging markets. Server makers who wish to speed data throughput will need to turn to an OpenCAPI manufacturer for accelerator devices.

OpenCAPI has been engineered to be compatible with the PCIe bus in x86 servers and to complement it. OpenCAPI will be compatible specifically with PCI Express 4.0, the next generation of the bus, due out in early 2017.

Likewise, the first accelerator devices based on OpenCAPI and PCIe 4.0 are still pending. In fact, the first servers incorporating those devices aren't expected until the second half of 2017.

IBM plans to offer servers based on its Power9 chip and OpenCAPI next year. Google and Rackspace announced at the OpenPower Foundation Summit in April that they will produce servers for their data centers based on the Power9 and OpenCAPI architecture. In an Oct. 14 blog post, John Zipfel, technical program manager for the Google Cloud Platform, announced Google had completed its first specification for the Zaius server.

Compared to the 16 megabit-per-second speed of the PCIe bus, CAPI devices will move data at 25 Mbps speeds. But the real data acceleration comes from CAPI's ability to integrate the data acceleration or memory device directly into the server architecture.

For example, solid state disks linked to an OpenCAPI device can be treated the same as system memory, increasing its data throughput rate to the processor. Without OpenCAPI a solid state disk must be treated as an external or secondary system. The server goes through thousands of CPU cycles to draw its data into main memory or a CPU. 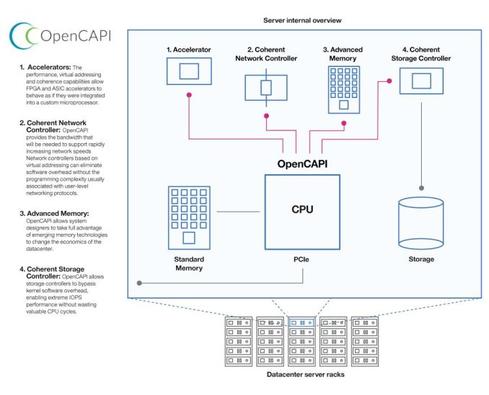 With OpenCAPI, those thousands are reduced to the few cycles needed by main memory itself.

Steve Fields, chief engineer of IBM Power Systems and member of the OpenCAPI Consortium board, wrote in a blog post:

An OpenCAPI device operates solely in the virtual address space of the applications it supports. This allows the application to communicate directly with the device, eliminating the need for kernel software calls that can consume thousands of CPU cycles per operation.

OpenCAPI devices and servers incorporating them are likely to find frequent use on the internet of things in machine learning and analytics applications, image recognition processing, and neural networks.

OpenCAPI devices will have cache coherency with the server's main memory, keeping data in the two different pools synchronized and enabling the CPU to call data from either one without a built-in delay.

Charles Babcock is an editor-at-large for InformationWeek and author of Management Strategies for the Cloud Revolution, a McGraw-Hill book. He is the former editor-in-chief of Digital News, former software editor of Computerworld and former technology editor of Interactive ... View Full Bio
We welcome your comments on this topic on our social media channels, or [contact us directly] with questions about the site.
Comment  |
Email This  |
Print  |
RSS
More Insights
Webcasts
Unlocking the Ultimate Source of Truth in Cloud Security--Network Data
SecDevOps: Tying Security to Your Application Development Processes
More Webcasts
White Papers
DevOps for the Database
The ROI Of SD-WAN: Not Just A Numbers Game
More White Papers
Reports
SANS Report: Measuring and Improving Cyber Defense Using the MITRE ATT&CK Framework
Cloud-Native Security Platforms: The Solution for the Digital Age
More Reports

Not sure what you were trying to say here, but 8 lanes of PCIe Gen3 are 50 Gbps. (giga not mega).

At these speeds, how long will it take to move a TB of memory around?
Reply  |  Post Message  |  Messages List  |  Start a Board

At the time of the announcement, Christ Johnson, principal engineer at Google, said OpenCAPI "can advance the future of server design by enabling higher performance for data-intensive workloads and the emrging accelerator ecosystem. Google next year will buy OpenCAPI-enabled servers from IBM.
Reply  |  Post Message  |  Messages List  |  Start a Board
Editors' Choice
Hot Topics