Name a popular software platform, and HP is probably developing an appliance for that. OK, you won't find IBM or Oracle examples, but Citrix, Microsoft, SAP, and VMWare are all on the list, and Microsoft is about to get another option.

HP on Thursday announced the ConvergedSystem 300 for the Microsoft Analytics Platform System (APS). Introduced in April, Microsoft APS combines SQL Server 2014 and, optionally, HDInsight, Microsoft's Apache Hadoop distribution based on the Hortonworks Data Platform (HDP) for Windows. Microsoft APS replaces the SQL Server 2012 PDW appliance, and it's the only on-premises option for HDInsight deployment. Those wishing to run Hadoop on Windows without SQL Server can use Hortonworks HDP for Windows.

[Have you heard about Helion? Read HP Bets Big On OpenStack And Hybrid Cloud.]

The ConvergedSystem 300 for Microsoft APS will ship with SQL Server Parallel Data Warehouse (PDW) configured to customer specifications. Optionally, customers can add HDInsight Hadoop nodes configured to run on the same box. The appliance combines servers, storage, and networking, and the whole idea is to save customers time and trouble.

"We're providing pre-optimized, pre-built building blocks that enable customers to deploy these new workloads quickly and without expertise," said Paul Miller, VP of marketing for HP ConvergedSystems, in a phone interview with InformationWeek. "You can go from order to up and running on Microsoft SQL Server in less than 30 days." 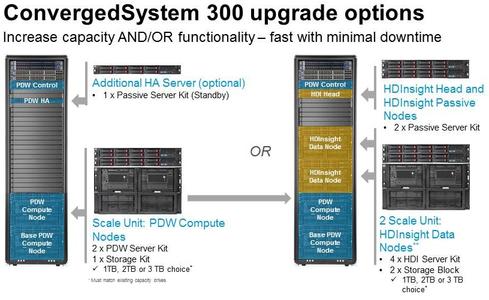 SQL Server PDW users can query the data on Hadoop nodes using PolyBase query capabilities for multi-structured data. Those Hadoop nodes could be HDInsight in the same rack or system or Azure HDInsight running in the Windows Azure cloud. PolyBase can also query against combinations of PDW and Apache, Cloudera, or Hortonworks HDP nodes.

The HP ConvergedSystem 300 for Microsoft APS starts with a 1/4-rack configuration for $275,000 (not including SQL Server PDW). Customers scale up in 1/4-rack increments, and they can mix SQL Server and HDInsight nodes. The entire system can span multiple racks for up to 6 petabytes of storage.

Customers interested in the ConvergedSystem 300 for Microsoft APS consult with HP engineers on workloads and desired configuration specifications. "Most customers have an enterprise license agreement with Microsoft with a site license," said Miller. "When we ship we have a process to enable the software, and we pre-load and pre-test everything in the factory."

The ConvergedSystem 300 for Microsoft APS is expected to ship by mid summer.

Doug Henschen is Executive Editor of InformationWeek, where he covers the intersection of enterprise applications with information management, business intelligence, big data and analytics. He previously served as editor in chief of Intelligent Enterprise, editor in chief of ... View Full Bio
We welcome your comments on this topic on our social media channels, or [contact us directly] with questions about the site.
Comment  |
Email This  |
Print  |
RSS
More Insights
Webcasts
The Failures of Static DLP and How to Protect Against Tomorrow's Email Breaches
Protecting Your Enterprise's Intellectual Property
More Webcasts
White Papers
A Technical Deep Dive on Software Exploits
2020 Gartner Market Guide for Network Detection & Response
More White Papers
Reports
Assessing Cybersecurity Risk in Todays Enterprises
Evolution of Ransomware Gangs
More Reports

- or to comply with regulatory restrictions (like: "- All the sensitive data must be stored inside the country, not in a I-don't-know-where distributed storage farm")

- or just because accessing data outside on the appliance means to use corporate network which, many times, is not a dedicated network, and the performance is not as good as it should be.

- or because statistical information could be stored in the control node, so it's possible to create improved execution plans when accessing non-structured data

- or because the control node can manage the different workloads, providing better performance to end-user applications

- or because it's easier to manage security (who access what) in structured and non-structured data.

So, IMHO, I guess there are many reasons to deploy such a "mixed" architecture in one rack.

Microsoft APS follows the route of adding Hadoop -- in this case Microsoft's HDInsight distirbution -- to what is otherwise a database appliance -- in this case Microsoft SQL Server 2014 Parallel Data Warehouse. Want a Hadoop-only deployment? You'll have to use Hortonworks Data Platform for Windows. HP does have suggested hardware configurations for HDP, but if you want a Hadoop appliance, it's probably going to throw HP Vertica Community Edition into the bundle -- just as Pivotal likes to mingle Greenplum with the Pivotal HD Hadoop distribution.

I'm not sure these guys are thinking these things through to scale. Relational databases and Hadoop do work together, but if you're doing a data lake with Hadoop, I'm thinking you're only going to need one rack with RDBMS while the Hadoop cluster is going to potentially grow across many racks. Or maybe you would have a couple of RDBMS racks and a handful for Hadoop. Why intermix on a single rack unless your not likely to move beyond the confines of a single rack? PolyBase connects the two worlds no matter where the clusters might be: on separate racks or even in the cloud on Azure. Opinions?
Reply  |  Post Message  |  Messages List  |  Start a Board
Editors' Choice
Hot Topics