Analyze 46 Petabytes Of Data Via Laptop? Here's How - InformationWeek

AT&T Research just put together a kind of poor man's big data approach to complex visualizations. It's developed a way to use a mere laptop to run analytics on the 46 petabytes of data running across AT&T's networks every day. AT&T calls the process nanocubes, a pun on data cubes, used to aggregate large quantities of data in relational databases. The AT&T researchers developed nanocubes as a way to see just how much data they could get into RAM.

Keeping large amounts of data in RAM would make it easier for people to analyze it. "For most visualizations it is crucial when the person viewing the visualization is in the loop," said Chris Volinsky, executive director of the statistics research department at AT&T. "We really wanted to have a fluid, quick response, so users could come up with a question and look at the data quickly to see if their initial hypothesis held any water."

Volinsky is no stranger to hard problems. He was part of the team that won the million-dollar Netflix Prize.

Stuffing billions of data points into computer memory was a big problem of its own. Jim Klosowksi, a principal member of technical staff at AT&T, said data cubes are naturally quick ways to look at data, but get very large. He said AT&T's research team had to come up with "several clever tricks" to minimize the amount of memory needed to store data. Because the data involved both time and geography, one trick was to store answers to common queries once -- time of day, for instance -- and simply use them again, rather than recalculate them. For more on their tricks, see this paper company researchers presented, "Nanocubes for Real-Time Exploration of Spatiotemporal Datasets." There's also a Youtube video.

AT&T is using nanocubes to examine things such as why cellphone calls get dropped on its network. Volinsky noted that AT&T has an app that lets customers report where they are when calls get dropped. The company can look at that data and combine it with internal data on signal strength and other network measures, and then visualize problem areas. It can use those maps to decide where to invest in its network technology.

AT&T could do similar visualizations before, but doing things like zooming in and out of the visualization to get different perspectives on the data was frustratingly slow. The nanocube approach means "you can start from the country and zoom to street level without much pain and suffering," Volinsky said. "It's had a huge impact."

AT&T has made the code for its nanocube visualization tools open-source, so it can be used by other businesses. 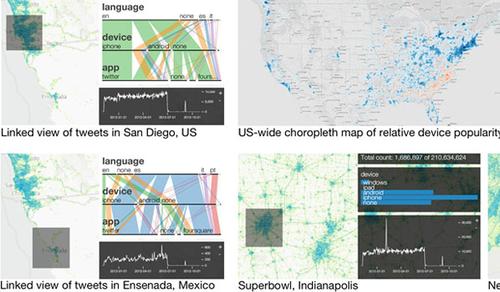 Companies that have geotagged their point-of-sale data, for instance, could build a nanocube that lets them study data over time and look for anomalies in their patterns. They could also potentially stream such data in real-time. Perhaps the main advantage will be that CIOs could set up nanocubes without needing to add to their server infrastructure.

"We aren't aware of other systems out there that allow this kind of interaction and exploration without firing up a big IT project," Volinsky said.

We welcome your comments on this topic on our social media channels, or [contact us directly] with questions about the site.
Comment  |
Email This  |
Print  |
RSS
More Insights
Webcasts
Now That Ransomware Has Gone Nuclear, How Can You Avoid Becoming the Next Victim?
Securing Active Directory the Way it Deserves
More Webcasts
White Papers
Wired vs. Wireless LAN Solution
2020 State of Malware Report
More White Papers
Reports
Online Threats -- and What Your Org Can Do About Them
[Special Report] Remote Network Management
More Reports

I have to caution that I have not worked with the technology. For many organizations it might replace server-driven visualizations. But certainly that will depend on the amount of data you're slicing.
Reply  |  Post Message  |  Messages List  |  Start a Board

Michael, this is fascinating technology. Do you feel this replaces the need for a visual analytics infrastructure that allows for in-memory processing of visualizations at the server level or would serve as a complement to that?
Reply  |  Post Message  |  Messages List  |  Start a Board

I would like to echo your point here. Nanocube is not just a relief to those CIOs who do not want to add extra hardware for big data analytics but it's an evangelization to those individuals who would like to use their laptop to peep into the big data in hand. Without bothering to set up the complete big data infrastruture, you can make your laptop self-contained for big data importing and real-time analysis, which is especially good fo personal use and small business.
Reply  |  Post Message  |  Messages List  |  Start a Board

Nanocubes may appeal not only to CIOs who want to do analysis projects without adding server infrastructure, but also to people looking to do a little rogue IT data anlaysis.
Reply  |  Post Message  |  Messages List  |  Start a Board

Thanks, Doug, for the recomendations. I too, will be intersted to see how widely used it becomes. I suspect it will get adopted, because it's an inexpensive way to get through a lot of data.
Reply  |  Post Message  |  Messages List  |  Start a Board

To really understand this in detail you have to watch the YouTube Video and possibly download the whitepaper (links to both provided), but the idea is akin to the drill-down analysis you can do in a good dydnamic data visualization tool. As you zoom in, you get the level of detail you're after in RAM -- not all 46 Petabytes. It's a neat zooming trick and I'll be interested to see if the technology gains adoption beyond AT&T labs.
Reply  |  Post Message  |  Messages List  |  Start a Board
Editors' Choice
Hot Topics

IT Career Paths You May Not Have Considered Lisa Morgan, Freelance Writer,  6/30/2020
White Papers
DevOps for the Database
Wired vs. Wireless LAN Solution
2020 State of Malware Report
Have Peace of Mind With Your Database Deployments
Step Into the New Era of Digital Decisioning Platforms