Teradata, MongoDB Get Their Databases Together - InformationWeek

Teradata on Thursday introduced a two-way connector between its eponymous database and the popular MongoDB NoSQL database.

Developed in partnership with MongoDB Inc., the vendor, the connector will let MongoDB database users tap into information in Teradata data warehouses and marts to trigger campaigns, next-best offers, or service or support offerings based on deep, historical analyses. Conversely, Teradata customers can use the connector to bring up-to-the-minute transactional data from MongoDB-based apps into a decision to ensure timely insight.

"In an Internet-of-Things, predictive service application, we might be pulling maintenance records and sensor data into Teradata on a nightly basis," said Chris Twogood, Teradata's VP of product and services marketing. "If somebody is doing service routing for repairs, they could tap MongoDB through this connector and get data from any device in that same area from within the last few hours, making the analytic more real-time."

The connection between the two databases is made possible by a QueryGrid feature and support for JSON (JavaScript Object Notation) data added to the Teradata database in April. The QueryGrid is a virtualized execution layer that orchestrates analyses across Teradata and other sources. Teradata previously announced QueryGrid connectors for Oracle Database and Hadoop. Without the connector, data movement between MongoDB and Teradata required cumbersome ETL (extract, transform, load) processes and manual work. 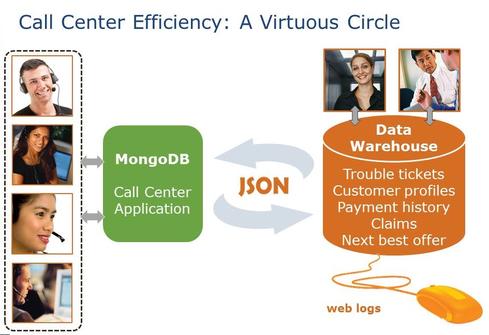 An illustration of call-center integration between MongoDB and Teradata.

"The JSON structure that we use had to be normalized into a flat file, exchanged with Teradata, processed, and then transformed back into JSON," said Vijay Vijayasankar, VP, global channels and business development at MongoDB. "Users previously couldn't get at the information they were after in real time, but the QueryGrid makes it very easy to do that."

MongoDB has been busy with partnerships of late. In addition to the Teradata alliance, MongoDB announced a strategic partnership with Cloudera in April. In both instances executives said the partnerships make sense because MongoDB is focused primarily on supporting transactional applications whereas Teradata and Cloudera are focused on analytics. But there are instances when MongoDB and other NoSQL databases are called upon to deliver basic, operational analytics.

"A call center agent talking to a customer will want to see the last few orders, and that's something we can typically do in MongoDB," said Vijayasankar. "But if you want to know the next-best action based on past trouble tickets, order returns, or other history, that's likely to come from Hadoop, Teradata, or another platform."

With the annual MongoDB World conference set for next week in New York, we're likely to see more partner announcements. IBM, for example, is set to make multiple presentations at the event, and it would be no surprise to see deeper ties between the two companies. Last year IBM added support for MongoDB's query language so developers could write apps to interact with data stored in DB2 and WebSphere or users of those tools could draw from MongoDB.

Doug Henschen is Executive Editor of InformationWeek, where he covers the intersection of enterprise applications with information management, business intelligence, big data and analytics. He previously served as editor in chief of Intelligent Enterprise, editor in chief of ... View Full Bio
We welcome your comments on this topic on our social media channels, or [contact us directly] with questions about the site.
Comment  |
Email This  |
Print  |
RSS
More Insights
Webcasts
What We Can Learn from Sports Analytics
ROI and Beyond for the Cloud
More Webcasts
White Papers
A Technical Deep Dive on Software Exploits
2020 Threat Hunting Report
More White Papers
Reports
The Malware Threat Landscape
Special Report: Edge Computing: An IT Platform for the New Enterprise
More Reports

Great article, Doug! Agile integrated use of historical data and the operational big data in MongoDB can change the way business is done.  New rapid insight goes well beyond adding new data and insight to existing processes.  A SQL query with JSONPath notation and structured columns analyzing data in Teradata Database and MongoDB lets the business ask questions the way they visualize the business, not the way the data is stored.

MongoDB is a New York-based company, and it seems to have very cosy ties with fellow NY-based company IBM. As mentioned above, IBM added support for MongoDB's query language last year, and DB2 already had support for JSON. We'll see if next Week's MongoDB World event sees direct integration between DB2 and MongoDB -- much like the Teradata/MongoDB connector. Another possibility would be hosting for MongoDB as a service in the IBM Softlater Cloud -- but wouldn't that compete with the Cloudant service IBM acquired earlier this year? Still scratching my head to figure out the goals there.
Reply  |  Post Message  |  Messages List  |  Start a Board
Editors' Choice
Hot Topics