Teradata extends expertise by adding Think Big as its consulting arm for deployments involving Hadoop and other open-source platforms.

Four-year-old Think Big had 75 employees at the time of the sale, and Teradata said it intends to retain and grow the practice to more than 100 employees by year end. Operating as "Think Big, a Teradata Company," the unit will be focused on big data deployments involving Hadoop and other open source platforms such as Storm, Spark, and MongoDB.

"This augments Teradata's strong consulting business, and we intend to keep Think Big in a vendor-neutral position with its own brand," said Chris Twogood, Teradata's VP of product and services marketing. "The company will led by [current CEO] Ron Bodkin, and we intend to scale it as fast as we can, because the pipeline continues to grow."

Teradata has more than 5,000 deployment consultants across 50 countries, and it generates more than half its revenue from consulting engagements. Teradata will defer big data deployment projects to Think Big, which has sales offices in Mountain View, Boston, Chicago, and New York, and a development center in Salt Lake City, Utah. What Teradata will not do, said Twogood, is expect Think Big to promote its products or get involved in Teradata or Asterdata deployments.

One of Think Big's differentiators, according to Bodkin, is that it is a big data pure play, whereas many of its competitors are positioning themselves around big data but very often dispensing "conventional data warehousing and analytics expertise involving single-machine models, running reports off of traditional databases, and working with ETL tools." Competitors include boutique firms such as Mu Sigma and large-scale systems integrators including IBM Global Business Services, Accenture, and Deloitte.

"Our goal is to build the industry's leading big data solutions practice with both software assets for repeatability and great people to do architecture, hands-on engineering implementation, and data science," Bodkin told InformationWeek. 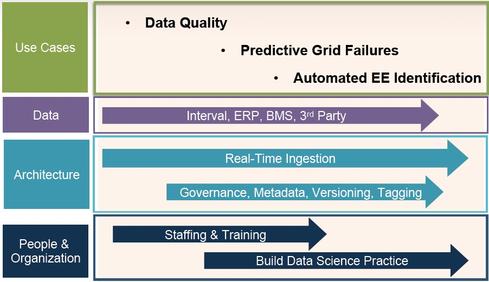 Think Big has worked with some 75 customers, including Ancestry.com, EMC, Intel, Johnson & Johnson, NASDAQ, and NetApp. The company employs agile, iterative development methodologies, and it has specialized in repeatable customer-behavior analyses using clickstreams and ad data. In the product arena it studies test and manufacturing production data and has spearheaded Internet-of-Things-style deployments using phone-home and log-file data. In financial services it looks at fraud and risk in a big data context.

"The common element is that we're working with more flexible ways of working with your data rather than just SQL," Bodkin explained. "People need to work with behavioral data, looking across multiple, correlated events in a session or across multiple sessions looking for patterns."

These are the types of analyses that traditional systems can't handle, said Bodkin, because "doing a seven-way join was cost prohibitive even in the most sophisticated databases." Preparing data in advance to answer one such question in a relational database might be feasible, "but being able to reorganize data on the fly for new questions is out of the question" with such platforms, he said.

The firm's Think Big Academy brings new employees, as well as partner and customer employees, up to speed on big data platforms and practices. The program has turned out hundreds of graduates, according to Bodkin, helping customers sustain and grow big data deployments after the consulting engagements conclude.

The terms of Teradata's acquisition, which concluded last week, were not disclosed. It follows closely on the heels of its July acquisitions of Hadapt and Revelytix. Hadapt offered an all-in-one analytics environment designed to handle analysis across data in Hadoop and relational databases and data warehouses, while Revelytix's Loom data-management suite helps Hadoop users discover data, generate metadata, and track data lineage.

By fleshing out its big data tools and consulting expertise, Teradata hopes to set itself apart from competitors including IBM and Oracle, which have checked many big data boxes, such as having Hadoop offerings, but are stuck, Twogood suggested, in SQL-oriented mindsets.

Doug Henschen is Executive Editor of InformationWeek, where he covers the intersection of enterprise applications with information management, business intelligence, big data and analytics. He previously served as editor in chief of Intelligent Enterprise, editor in chief of ... View Full Bio
We welcome your comments on this topic on our social media channels, or [contact us directly] with questions about the site.
Comment  |
Email This  |
Print  |
RSS
More Insights
Webcasts
Strategies for Success with Digital Transformation
Making Cybersecurity Work in Small and Medium-Sized Businesses
More Webcasts
White Papers
Universal Internet Connectivity: Reality or Myth?
Seven recommendations for a Successful SD-WAN Strategy
More White Papers
Reports
The State of Cloud Computing - Fall 2020
Special Report: Edge Computing: An IT Platform for the New Enterprise
More Reports