Nate Silver, the world's most famous statistician, offered his perspectives on the news media, political polling, and what will happen in the 2016 US presidential election during a presentation at the Salesforce World Tour in New York today. Here's what he said.

NEW YORK – Nate Silver, famous for having correctly predicted the outcome of the 2008 US presidential election, said it's too early to tell with certainty who will win the 2016 presidential race, since it's still a year away, but early signals point to a close general election.

Silver, the famous statistician who runs the FiveThirtyEight blog, which covers politics and sports and is author of The Signal and The Noise, presented his predictions for the 2016 US presidential race at the Salesforce World Tour in New York Nov. 18.

Republicans are in disarray. Polling has become less accurate. There's no one place where everyone goes to get their news or facts. All this adds up to a different climate. Silver provided these perspectives and also offered predictions about the primary elections.

Who are his favorites for the Democratic and Republican primaries next year? Silver qualified his statements, saying that it was still really early to predict outcomes.

He noted that relying on media coverage and polls is not the best way to get an accurate view of who might win next year's election. That's because much of the media is swayed by particular political slants, and people don't get their news from the same sources anymore. 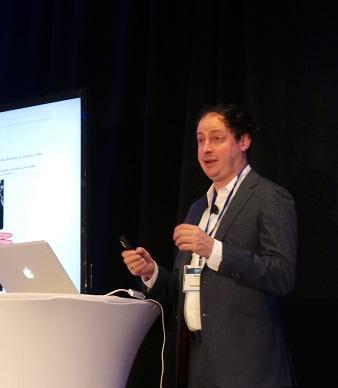 "There's so much information," Silver said. "We have no ability to consume all the news in one place, and Republicans and Democrats are getting completely different sets of facts."

The accuracy of poll numbers has also deteriorated. That's because it's more difficult to reach people via phone at home. Pew Research had response rates of 35% to their political telephone polls in the 1990s. Today that number is 9%.

"They have not yet run their 2015 survey, but you would expect it's even lower still," Silver said.

While you can use demographic weighting to make the poll more accurate, it's still more challenging than ever to be accurate. It's easier to get older people and women on the phone, Silver said. The 37 year-old said that people his age are unaccustomed to taking phone calls and they are worried about privacy when they are asked to take phone polls.

The Internet and online polls offer some promise, but it's difficult to reach people randomly there. Instead, you get people volunteering to take the poll, and they are typically more enthusiastic. You may miss people this way. This kind of polling isn't accurate enough yet, although it may improve in the next five to fifteen years, Silver said.

Any predictions become more accurate as an event draws closer, he said. That said, while many vocal supporters are pushing Bernie Sanders, Silver said Hillary Clinton remains the favorite to win the Democratic primary.

"Yeah, Hillary is inevitable, with an asterisk," he said. "You've never had a candidate this far ahead in the polls." In addition, influential members of the Democratic Party have endorsed her almost universally, Silver said. She is winning what Silver calls The Endorsement Primary with 441 vs. Bernie Sanders's 2 and Martin O'Malley's 1.

Could anything derail the Hillary Clinton train in favor of Bernie Sanders? "Bernie does not have the institutional support," Silver said. However, he added, "There could always be a scandal. There could always be a health issue," that could derail Clinton's momentum. But without that, Clinton is a favorite to win the Democratic primary.

The Republican primary is far less certain. Polls have Donald Trump or Ben Carson leading, depending on which one you follow, and neither choice is a traditional candidate for US president.

"You've never had a Trump or a Carson be a major candidate before," Silver said. "Is it possible that this time is different? That you could really have a candidate like Trump? He's not even a Republican really."

[Read about how the chief data scientist at Intel tackles big data projects.]

As for the general election, the fundamentals point towards a toss-up, Silver said. There is no incumbent in the race. There are mixed signals in one of the key factors that drives voters and their decisions, the economy -- it's not overwhelmingly good or bad.

Plus, things could change significantly around the economy in the year between now and the election.

Silver pointed to the Dow Jones Industrial Average in the year leading up to Nov. 5, 2007. The stock market was not looking worried then, but a year later it was the worst year for the market since 1937.

"People can forget about that lesson," Silver said.

Jessica Davis is a Senior Editor at InformationWeek. She covers enterprise IT leadership, careers, artificial intelligence, data and analytics, and enterprise software. She has spent a career covering the intersection of business and technology. Follow her on twitter: ... View Full Bio
We welcome your comments on this topic on our social media channels, or [contact us directly] with questions about the site.
Comment  |
Email This  |
Print  |
RSS
More Insights
Webcasts
Making XDR Work in Your Enterprise - May 12
Data Center Network Operations (NetOps) Reimagined
More Webcasts
White Papers
Protection Strategies for a Cyber-Resilient Organization
Global software company contracts with CBTS for Virtual CISO
More White Papers
Reports
The State of CCPA 2021
Protection Strategies for a Cyber-Resilient Organization
More Reports

If putting money where their mouth is would silence some of this year's political candidates, I'd gladly ante up.
Reply  |  Post Message  |  Messages List  |  Start a Board

I like Nate Silver. He had enough confidence in his information on the 2012 election to resent it when his projected Obama win attracted denunciations from Fox News. In response, he offered a public $2,000 bet with commentator Joe Scarborough on the outcome. That was followed by a long silence from Joe, who conceded after the election that Nate had been right. I like people who put some money where their mouth is.
Reply  |  Post Message  |  Messages List  |  Start a Board
InformationWeek Is Getting an Upgrade!