MapR Technologies on Tuesday became the last of the big-three Hadoop players to release a software distribution incorporating YARN (following Cloudera and Hortonworks), but it's touting two important advantages in version 2.2 that it says were worth waiting for: broad compatibility with a wide array of data-analysis applications and backward compatibility with MapReduce 1.0.

As a proof point on compatibility with data-processing and data-analysis applications, the company announced a preview release of the HP Vertica Analytics platform on MapR, a new SQL-on-Hadoop option that offers the speed and SQL-compliance of an industry-leading database management system (DBMS).

"Incomplete" and "SQL-like" are not-so-veiled references to Impala and Hive, the Apache projects championed by MapR rivals Cloudera and Hortonworks, respectively. This isn't the first time a DBMS has run on Hadoop. Pivotal put its Greenplum database engine on top of the Pivotal HD distribution with HAWQ, and Calpont has done much the same with its InfiniDB DBMS and the Hadoop Distributed File System (HDFS). But those efforts took reengineering of the DBMS, whereas MapR says it can work with unaltered Vertica and many other data platforms.

"YARN is great and it lets you do more than MapReduce with Hadoop, but when you combine that with our general-purpose storage platform, it greatly expands what's possible," Jack Norris, MapR's chief marketing officer, said in an interview with InformationWeek.

The "general-purpose" line is a reference to MapR's concurrent-read-write-capable data platform. MapR parted ways with the rest of the Hadoop community long ago by replacing HDFS with this Network File System (NFS) protocol-based system that can handle random, concurrent reads and writes. By comparison, HDFS operates "like a CD-ROM, not like enterprise storage," Norris asserted. And because many applications assume the use of such storage systems, MapR's latest release can support many applications without alteration, he said.

"Whether it's a high-performance computing environment, pricing-optimization applications, operations research apps, or a widely used DBMS like HP Vertica, you can run it on our platform and take advantage of the distributed data environment," Norris said. The implementation for HP Vertica to run on MapR is expected to be generally available in March. 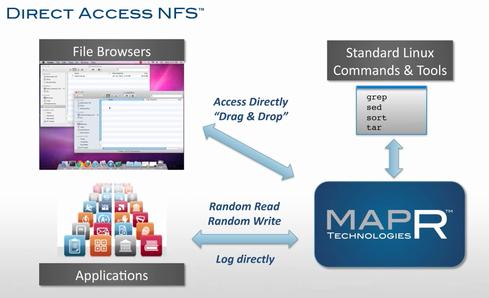 The second advantage MapR is touting with its latest release is backwards compatibility with MapReduce 1.0 jobs. Companies with lots of legacy MapReduce processes running on other distributions face a tough choice on when and how to migrate to new Hadoop 2.0 clusters because jobs will have to be rewritten to work with YARN. MapR says its latest release is unique in running MapReduce 1.x and YARN on the same nodes simultaneously, providing an "easy and risk-free" to new Hadoop clusters.

Long-time MapR customer comScore is "excited" about MapR's "seamless upgrade path," said CTO Michael Brown in a statement, because "we run more than 20,000 jobs each day on our production MapR cluster." Even if its only hundreds or thousands of job types run repeatedly throughout the day by comScore, that scale of rewriting would obvoiusly be daunting.

In a third announcement on Tuesday, the company introduced a free, laptop-deployable MapR Sandbox for Hadoop. The download lets users deploy a "complete and fully-configured virtual machine" of the MapR distribution for Hadoop within five minutes, according to the vendor. The Sandbox includes point-and-click tutorials for developers, analysts, and administrators, plus the ability to drag and drop files from any source into the system and start developing and testing applications.

MapR departures from the standard Hadoop stack have led competitors to dismiss it as proprietary and prone to vendor lock-in (a criticism that Hortonworks also levels against Cloudera for its management software and other components). But MapR tunes them out and promises higher-performance, mission-critical snapshotting, and high-availability features that it says HDFS cannot support.

MapR is third in a three-horse race among independent Hadoop distributors. What has yet to be seen is whether the gap behind leader Cloudera and fast-growing rival Hortonworks will open or close in the Hadoop 2.0 era.

Doug Henschen is Executive Editor of InformationWeek, where he covers the intersection of enterprise applications with information management, business intelligence, big data and analytics. He previously served as editor in chief of Intelligent Enterprise, editor in chief of ... View Full Bio
We welcome your comments on this topic on our social media channels, or [contact us directly] with questions about the site.
Comment  |
Email This  |
Print  |
RSS
More Insights
Webcasts
Detecting and Preventing Insider Data Leaks
Ten Keys to Better Security Data Analysis
More Webcasts
White Papers
Sunburst: Impact and Timeline
Are We Cyber-Resilient? The Key Question Every Organization Must Answer
More White Papers
Reports
Enabling Enterprise Resiliency Through Cyberthreat Detection
Building the SOC of the Future
More Reports

HDFS operates "like a CD-ROM, not like enterprise storage," said Jack Norris, MapR CMO. That's sacrilidge in the Hadoop community, and I wish him luck with it. Replacing HDFS with NFS, concocted by Sun Microsystems for its workstations in the mid-1980s, just might be a bit of genius. Then again, geniuses are usually found in the select minority.
Reply  |  Post Message  |  Messages List  |  Start a Board

I thought that old criticism about Hadoop NameNode reliability, etc., had died down with changes made to core Apache Hadoop software, but MapR is still insisting that Hadoop can't be a "mission critical" with HDFS as-is. "People assume that 'snapshots' are point-in-time consistent snapshots across volumes and clusters, but with open source HDFS, whenever the file is closed, that's the data that's contained in that snapshot," MapR's Jack Norris told me last week. "So that means there are all storts of time stamps associated with a snapshot [if you use HDFS], and you can't recover an application that way."

With these vulnerabilities, talk of Hadoop as an "enterprise data hub," as espoused by Cloudera, is premature, says Norris, because you can't depend on the data that gives you higher-level analytical capabilities at the top of the stack. Cloudera and Hortonworks would obviously disagree with these assertions, but they're too busy throwing cold water on each other's strategies. Frankly, the more these three companies rail at each other, the less faith the whole world has in Hadoop -- and they're not distinquishing among anybody's distribution.