Machine Learning: How Algorithms Get You Clicking - InformationWeek

Technology may be able to free journalists from creating sensationalistic stories to generate online traffic, but it doesn't alter what people choose to read.

Click-o-tron, as described by creator Lars Eidnes, "gives us an infinite source of useless journalism, available at no cost."

It is a website that, when not overwhelmed with traffic, employs machine learning to generate clickbait headlines for news that never happened, such as "New President Is 'Hours Away' From Royal Pregnancy."

It barely makes sense but you want to read it anyway. It's almost as astute in its randomness as The Onion manages to be through deliberate humor.

"Clickbait" refers to sensationalist stories that aspire to maximize online visitor traffic by appealing to emotion rather than reason. Though a source of shame among many journalists, it's also a source of revenue, something scarce in a world where few willingly pay for content. It has become the foundation of a handful of successful online publishers such as Buzzfeed, which subsidizes substantive reporting with pablum tuned to maximize attention and ad impressions. For example, consider Buzzfeed's "26 Adorable Dogs Who Are Slaying The Fall Fashion Game." 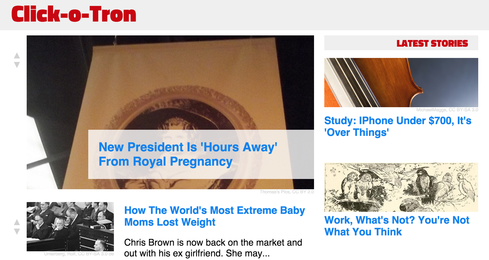 Eidnes, a software development consultant at Itema in Norway, created his system to automatically create clickbait news headlines in order to free writers to do more meaningful work. "If I remember correctly from economics class, this should drive the market value of useless journalism down to zero, forcing other producers of useless journalism to produce something else," he explains in a blog post.

It's a noble goal, through arguably misdirected. Driving the cost of clickbait creation to zero doesn't change the consumption preferences of the online audience or the economic incentives that follow from those preferences. Rather than teaching machines to craft clickbait, we might do better to teach humans to demand a higher-quality media diet.

[Read about how software-based machine learning attempts to emulate the same process that the brain uses.]

"World's Most Dangerous Plane" and "How To Get Your Kids To See The Light" could be real clickbait stories. "Obama Has More Surgery, More Xbox One Coming?" doesn't quite work, but Eidnes suggests that crowdsourcing story prominence through voting can weed out the incoherent headlines.

The headline, however, is only the sales pitch. To close the deal, Eidnes will need to generate coherent stories for his provocative links, instead of the gibberish that's there now. That may be beyond the scope of his experiment, but it's not as implausible as it sounds. Machines powered by software from Automated Insights are already generating financial earnings stories for the Associated Press -- and machine learning keeps getting better.

Thomas Claburn has been writing about business and technology since 1996, for publications such as New Architect, PC Computing, InformationWeek, Salon, Wired, and Ziff Davis Smart Business. Before that, he worked in film and television, having earned a not particularly useful ... View Full Bio
We welcome your comments on this topic on our social media channels, or [contact us directly] with questions about the site.
Comment  |
Email This  |
Print  |
RSS
More Insights
Webcasts
Building the SOC of the Future: Next-Generation Security Operations
ROI and Beyond for the Cloud
More Webcasts
White Papers
Passwordless: The Future of Authentication
The State of Threat Detection and Response
More White Papers
Reports
Evolution of Ransomware Gangs
2020 State of DevOps Report
More Reports

I thought this was what journalism had come to but was afraid to look. When no one can tell machine-generated stories from the those of the reporter, it will be time to go.
Reply  |  Post Message  |  Messages List  |  Start a Board
Editors' Choice
Hot Topics

More Informa Tech Live Events
The Failures of Static DLP and How to Protect Against Tomorrow's Email BreachesBuilding the SOC of the Future: Next-Generation Security Operations5 Steps to Solving Modern Scalability Problems