Christopher Emerson brings an IT perspective to the business of determining how much it will cost to handle a legal matter. 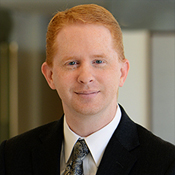 Emerson is director of practice economics at Bryan Cave LLP, a 1,200-attorney, 27-office law firm based in St. Louis, Mo. It's his job to do figure out what a legal matter should cost Bryan Cave to handle, how much it would cost other firms, and where it can be more profitable.

Law firms haven't done much analyzing of their practices, though some firms were early leaders in the use of text analytics. Analytics is on the rise in law firms, thanks to the 2008 recession and the rise of e-discovery and e-billing.

Emerson got his current title in 2010. But he's been at Bryan Cave for 17 years, starting as a software development manager. He led the development of business intelligence applications, a cost-allocation system and a financial dashboard that was licensed to Redwood Analytics, which sells the product to other law firms.

Emerson's shift to practice economics came as a response to clients who wanted lower bills or had set legal budgets to help control costs. While lawyers commonly bill by the hour, there have long been alternative fee arrangements where lawyers bill by other measures, like contingency fees or project budgets.

Emerson's job was to figure out how Bryan Cave could work profitably on a set project basis when asked to do it, a form of risk analysis.

Bryan Cave was early in creating a job like Emerson's, said Craig Raeburn, VP and managing director of legal analytics at TyMetrix, which makes an e-billing product used by law firms, and also operates the LegalVIEW data warehouse, a database made up of data contributed by 130 of its clients.

Raeburn said that in the past 18 moths, almost every large law firm in the U.S. has hired a pricing director, someone "charged with helping to look at their pricing and determine if they're being as competitive as possible."

He calls Emerson "an early adopter. He has built a team that is able to work with the data in some compelling ways."

Emerson is unusual in that he comes from the IT side; he said law firm pricing directors and legal project management directors tend to come from business development, marketing, finance or accounting.

Emerson's group started with three people and now has 11, a mix of business analysts, MBAs, lawyers and software developers. They analyze 2 TB of data Bryan Cave has accumulated. This year they also began using the TyMetrix LegalVIEW database, which holds information on $45 billion worth of legal bills.

In the last three years, Emerson and his team have developed three significant analytics products, and are working on two others. In 2011, they built a program called Tasker that analyzes how lawyers spend their time, combining structured and unstructured data.

Tasker's job can be complicated, because lawyers use catchall phrases like "review documents" when filling out bills. Did they perform due diligence? Analyze prior contracts? Emerson said. Tasker can learn to predict, with 87% to 92% accuracy, what the lawyers actually did.

Such information is helpful both in soothing clients and in figuring out just what lawyers are doing, so that Bryan Cave can decide whether to take on work offered with a set fee upfront.

A related text-analytics effort is to look for certain phrases that make clients balk. "We had one client call and say 'I see this bill is littered with the word strategize. Is that all you guys do?'"

E-billing vendors provide analytics of their own, and flag legal clients on phrases, telling them not to pay for those services. "There are automatic write-offs imposed, and flags for further conversations," Emerson said. In 2012, Emerson's team began searching for common word phrases that create those flags, to reduce client pushback and improve Bryan Cave's fee collection.

This year, Emerson's group began coupling its internal data with TyMetrix's data. Using external datasets helps Bryan Cave benchmark its costs against other firms, by industry, legal practice area and geography. This information also helps it plot ways it could be more competitive.

Semantic analysis is being deployed to help automatically predict what kind of lawyers' time and budgets will be required to work on certain kinds of cases. In a merger, for instance, Emerson can pull data on similar cases and help predict the likely budget.

Emerson's group isn't working just on billing. It's developed an internal service it calls Rosetta that takes data sources and creates summaries for lawyers, a kind of text visualization.

Emerson's group has worked on more than 11,000 legal matters since 2011, involving about 40% of the firm's attorneys.

"The work we've been involved with beats the firm average on profitability," Emerson said.

We welcome your comments on this topic on our social media channels, or [contact us directly] with questions about the site.
Comment  |
Email This  |
Print  |
RSS
More Insights
Webcasts
Protecting Your Enterprise's Intellectual Property
Building the SOC of the Future: Next-Generation Security Operations
More Webcasts
White Papers
How to Prioritize Risk Across the Cyberattack Surface
The State of Threat Detection and Response
More White Papers
Reports
Assessing Cybersecurity Risk in Todays Enterprises
The State of Cloud Computing - Fall 2020
More Reports

10 IT Trends to Watch for in 2021 Cynthia Harvey, Freelance Journalist, InformationWeek,  12/22/2020
White Papers
How to Prioritize Risk Across the Cyberattack Surface
From MFA to Zero Trust
Cyber Threats & Trends: Jan-June 2020
Seven recommendations for a Successful SD-WAN Strategy
Threat Intelligence Solutions: A SANS Review of Anomali ThreatStream