KPMG, the global global tax auditing and advisory firm, aims to use Watson's cognitive computing capabilities to look at volumes of data that, from a human standpoint, would be impossible to manage.

KPMG has made a new hire to help its knowledge workers innovate: an IBM computing system named Watson.

The global tax auditing and advisory firm on Tuesday said it will deploy the cognitive computing capabilities of IBM's Watson to enhance its professional service offerings.

Watson made its name beating two human contestants, Brad Rutter and Ken Jennings, in a game of Jeopardy back in 2011. Amid the continuing advancement of artificial intelligence, it has since found employment in healthcare, helping oncologists make clinical decisions, and in a growing number of other industries.

In a phone interview, Steve Hill, US head of innovation for KPMG, said the deal extends a relationship with IBM that has evolved over a decade. "IBM Watson will help our professionals focus on higher levels of innovation and problem-solving with clients, because Watson will do more of the rule-based work," he said. "It will be able to look at volumes of data that, from a human standpoint, would be impossible to manage."

IBM Watson VP Ed Harbour observed in an email to InformationWeek that professional service organizations struggle to cope with the huge influx of data. "Cognitive systems are capable of not just ingesting, understanding and learning from massive amounts of data, but also delivering actionable insights in seconds," he said. 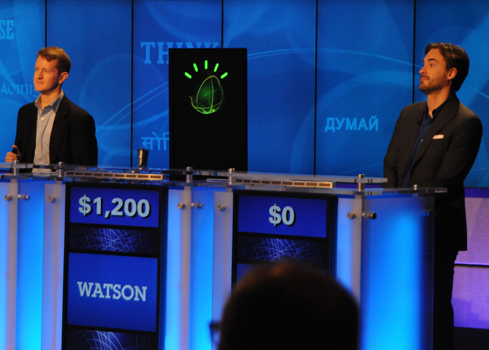 IBM's Watson gained popularity by beating two human contestants in a game of Jeopardy! in 2011

As an example, Hill points to commercial loans, which tend to include lots of unstructured data. "Understanding the terms and conditions in a loan arrangement is very difficult for a human to do with a large sample set of data," he said. "IBM Watson can use cognitive technology to pull every transaction in nanoseconds, as opposed to hours. It can fill out what accountants call line sheets that have different criteria assessing the risk of the loan."

Computing technology has created more data than human workers can possibly handle. That's one reason there's so much interest in cognitive computing. The automation of knowledge-oriented tasks has become a viable way to analyze data and generate appropriate, actionable responses at scale.

Many tasks performed by knowledge workers are rule-based, said Hill. Such work can be delegated to Watson and digested, freeing KPMG professionals to think clearly about interpreting the data. "The ability to think about what you're seeing, to bring innovative thought to the analysis of the market, is at the top of the pyramid of the work that we do," he said.

Hill said that Watson's assistance will enhance the value and quality of the work his firm provides. And he believes cognitive computing will fundamentally change how knowledge workers operate.

As for whether Watson will displace human workers, Hill said he has doubts. "Everyone thought machine intelligence in hospitals would reduce doctors," he said. "But more doctors and more specialists were needed."

Like human employees, Watson requires time to learn the ropes. "We have completed several successful pilot engagements with KPMG, training Watson alongside their auditors, and expect to complete several additional training cycles before Watson is assisting with client audits," Harbour said via email. "The initial focus for the technology will be on teaching Watson to analyze the data tied to a company's financial information so that it can begin assisting in fine-tuning assessments."

Unlike human employees, Watson isn't likely to jump ship for a better offer at another company.

Thomas Claburn has been writing about business and technology since 1996, for publications such as New Architect, PC Computing, InformationWeek, Salon, Wired, and Ziff Davis Smart Business. Before that, he worked in film and television, having earned a not particularly useful ... View Full Bio
We welcome your comments on this topic on our social media channels, or [contact us directly] with questions about the site.
Comment  |
Email This  |
Print  |
RSS
More Insights
Webcasts
Managing a Hybrid Cloud Infrastructure
Advancing the Hybrid Cloud & App Modernization Journey with IBM
More Webcasts
White Papers
2020 SANS Enterprise Cloud Incident Response Survey
The Top 5 Mistakes Everyone is Making in Vulnerability Remediation
More White Papers
Reports
Enabling Enterprise Resiliency Through Cyberthreat Detection
The State of DevSecOps Report
More Reports