50%
Tweet
From fashion to food to healthcare, IBM's Watson has many guises across different industries. Here's a look at some of the work IBM's AI system has been doing since its Jeopardy! heyday. 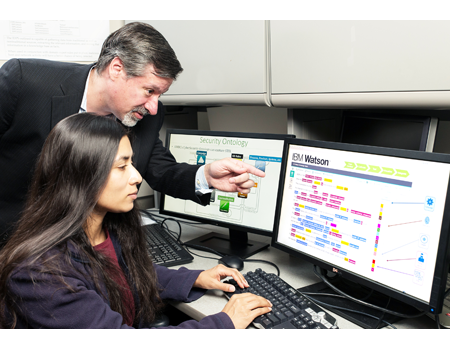 After defeating Brad Rutter and Ken Jennings in a game of Jeopardy! in 2011, IBM's Watson couldn't survive on its $77,147 in winnings. Unlike Microsoft's Cortana and Apple's Siri, Watson lacked a parent willing to let it continue living in the basement rent-free, so it got a paying job in healthcare, helping insurer Wellpoint and doctors by providing treatment advice.

Since then, and following investments of more than $1 billion, Watson has become a machine-of-all-trades. Through a combination of machine learning, natural language processing, and a variety of other technologies, Watson is helping companies across a broad spectrum of businesses. Beyond healthcare, Watson earns its keep in fashion, hospitality, food, gaming, retail, financial services, and veterinary medicine.

Its latest engagement involves protecting computers from its own kind. On Tuesday, IBM announced Watson for Cyber Security, a role that comes with residence in the cloud, instead of the Power 750 systems it inhabits on corporate premises.

This fall, Watson, with the assistance of researchers at eight universities, will begin learning to recognize cyber-security threats in the hope that its cognitive capabilities will help identify malicious code and formulate mitigation strategies. The core of its training data will come from IBM's X-Force research library, which includes data on 8 million spam and phishing attacks, as well as more than 100,000 vulnerabilities.

IBM believes that Watson's ability to understand unstructured data makes it well-suited for malware hunting. The firm said that 80% of all Internet data is unstructured, and that the typical organization makes use of only about 8% of this data. Given AI's already considerable role in fraud detection, it wouldn't be surprising to see Watson excel in cyber-security.

Marc van Zadelhoff, general manager of IBM Security, sees Watson as an answer to the cyber-security talent shortage. "Even if the industry was able to fill the estimated 1.5 million open cyber-security jobs by 2020, we'd still have a skills crisis in security," he said in a statement.

So robots, of a sort, are taking jobs. But this may be for the best, since the work of processing more than 15,000 security documents a month, according to IBM, would be rather a chore.

At the same time, Watson will benefit from free labor, in the form of job training provided by students at the eight universities involved with the project.

You, too, may see Watson or something similar working in your industry. It won't be a particularly social colleague, but at least it will get you those reports you need on time.

Here's a look at a few of the many faces of Watson.