Big Blue's partnership with Twitter underscores the business value of social media. IBM is suggesting that if you look, you can see the impact of tweets on your bottom line.

Employee turnover is bad for business. While that may be obvious, IBM has data that shows why. And it's offering companies the opportunity to seek similar insights through a deal with Twitter.

In October, IBM partnered with Twitter to make Twitter's social data available to IBM's data analysis. After more than 100 exploratory engagements with clients, IBM and Twitter on Tuesday plan to make three cloud-data services available to help businesses turn Twitter conversations into business intelligence that they can use in the decision-making process.

These include: IBM Insights for Twitter Service on Bluemix, a way to create apps that utilize social data; Watson Analytics with Twitter Built In, a service that combines and automates data curation, predictive analysis, and visual storytelling; and BigInsights Enterprise Hadoop as a Service, a way to bring Twitter data to enterprise Hadoop deployments.

[ See where leading firms are focusing their innovation. Read 4 Data-Driven Predictions For IT Innovation. ]

Intelligence agencies have been mining social media for years, as have private sector companies. IBM contends its approach – which involves combining Twitter data with other streams of public and business data, such as weather forecasts, sales figures, and inventory statistics – allows businesses to spend less time preparing data and more time creating information that can be acted upon. 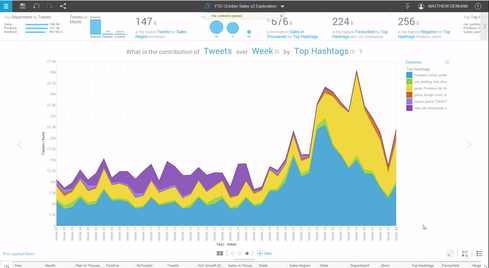 By mixing Twitter data with Watson Analytics, IBM says it helped a global food service chain understand how employee turnover was turning off its most loyal customers. IBM's analytics models showed that customers built up relationships with the food chain's sales associates and expressed that affinity in tweets. Customers also remarked on the absence of those employees and expressed frustration using the same social media channel. Sales declined as a consequence and those venting their dissatisfaction were among the company's most loyal and valuable customers.

IBM is suggesting that if you look, you can see the impact of tweets on your bottom line.

Other insights that emerged from IBM's analysis of client-related Twitter data include ways to anticipate and mitigate telecom customer churn and to assess demand for apparel products.

IBM introduced a beta version of Watson Analytics in September 2014 as a tool to make data analysis more accessible. The firm has been adding language processing, image recognition, and reasoning capabilities through acquisitions like AlchemyAPI earlier this month.

Dave Schubmehl, research director at IDC, said in a phone interview that, while other companies have been analyzing social media sentiment for years, IBM's involvement should expand awareness of Twitter data among enterprise IT groups. "A lot of enterprise organizations that IBM is involved with haven't looked at the wide range of use cases for Twitter data," he said. "What I think is really happening here is IBM is helping to validate social media data in general, and Twitter data specifically, as something that should be a part of the enterprise."

Schubmehl said the value of IBM's approach is in combining Twitter data with other types of complex data – like weather data, for example – so that the result isn't just sentiment analysis.

Schubmehl sees the IBM-Twitter partnership as a good sign for Twitter and other sources of social media data. "Data itself is coming of age as a product, and companies like Twitter and Facebook that sell that kind of data will do very well."

Thomas Claburn has been writing about business and technology since 1996, for publications such as New Architect, PC Computing, InformationWeek, Salon, Wired, and Ziff Davis Smart Business. Before that, he worked in film and television, having earned a not particularly useful ... View Full Bio
We welcome your comments on this topic on our social media channels, or [contact us directly] with questions about the site.
Comment  |
Email This  |
Print  |
RSS
More Insights
Webcasts
The Failures of Static DLP and How to Protect Against Tomorrow's Email Breaches
Strategies for Success with Digital Transformation
More Webcasts
White Papers
How to Prioritize Risk Across the Cyberattack Surface
Frost Radar: Global Threat Intelligence Platform Market
More White Papers
Reports
IDC FutureScape: Worldwide Digital Transformation Predictions
Special Report: Edge Computing: An IT Platform for the New Enterprise
More Reports

More accurate analyses may lead to more confident decision making. And better decisions can mean greater operational efficiencies, cost reductions and reduced risk.These can all be done by using big data .One the other hand ,today's data comes from multiple sources . Without connecting and correlating relationships , our data can quickly out of control. So we should make good use of big data .
Reply  |  Post Message  |  Messages List  |  Start a Board

It is always good to have a large data base. Twitter successfully collects a huge data base of personal information and Twitter is really doing well about the data. But it is more important knowing how to use the data and to interpret the results. Then company can figure out the solution. I have to say that IBM have been doing great jobs in this field. IBM successfully combined the non-traditional data and conventional data. The result is solid. It shows us how high turn-over rate can really affect a business. And I don't think this is the first time IBM successfully use data like this. I've read a few articles about how IBM use its business customer's data to help improve the business.

I do agree with you. Big data has great resources of information and it contains some relationships if carefully researched. What's more, it is information era and many companies need the support of technology by big data. With this, company can develop a smarter and more conveient way.
Reply  |  Post Message  |  Messages List  |  Start a Board

I really agree with you. Datas can reflect something which is popular among people through social media. However, it may not be real sometimes cause people will hide their thoughts and pretend as the same taste as other people. It must be hard for company to gather useful information and can be challenging.
Reply  |  Post Message  |  Messages List  |  Start a Board

That' resaonable. The coorperation of IBM and Twitter can boost the share of customers data, which is valuable and informative. This data is individaul and can represent customers' personal idea to some degree. Thus, companies can use big data technique to perfect their products or services.
Reply  |  Post Message  |  Messages List  |  Start a Board

I do agree with your idea. Big Data Era will eventually come and shift companies' recognition about the use of big data. Big companies will gradually put more importance on big data. Actually, many companies are using big data to perfect or even create their products. As the Big Data techinique develops more mature, the use of it will be more effective. Thus, it can be predicted that a fierecer competition among companies will occur due to big data. In this sense, application of big data could be vital to the development of certain companies.
Reply  |  Post Message  |  Messages List  |  Start a Board

Make sense...Sometimes a huge amount of data can be misleading. However, all things considered, I still believe that having an access to big data base is better than just trusting past experience or even intuition when business managers make decisions.
Reply  |  Post Message  |  Messages List  |  Start a Board

Totally agree with you. Companies should take advantage of the big data trend and thus make more profits. The ability of gathing, analysing and using date has become one of the most important competitive power for companies. Only companies that use data wisely can survive.
Reply  |  Post Message  |  Messages List  |  Start a Board

I do support your idea. There still some bugs in the data processing , leading to some misunderstandings when people analyse these data . There is the point . That's why some prominent companies need to cooperate with each others to improve this situation just like the IBM and Twitter. I do believe with the development of both sides , we deserve a better one .
Reply  |  Post Message  |  Messages List  |  Start a Board

The ability to sift, analyze, and reflect upon large amounts of data is crucial in today information age. It is a efficient way to deal with the business and daily life . So many comanies should make good use of it . Is common to see that just like the IBM and Twitter, the support of Semantic technologies by big companies like Facebook, Google and Best Buy will be enough to kick start this new era of a smarter and more structured Web of data.

All in all , the upcoming era is an Big Data era . Either the user or the founder should keep pace and make good use of it to maximize the profit for both side .
Reply  |  Post Message  |  Messages List  |  Start a Board
Page 1 / 2   >   >>
Editors' Choice
Hot Topics