SyNAPSE chip aspires to be as powerful as the human brain without using much power.

IBM on Thursday revealed a computer chip designed to process information in a way that emulates the human brain.

Described in Science magazine, the Systems of Neuromorphic Adaptive Plastic Scalable Electronics (SyNAPSE) chip is a "neurosynaptic computer chip," capable of processing information over a network of 256 million programmable synapses and one million "neurons" that communicate via electrical bursts, like the neurons in the brain. SyNAPSE chips are based on a computing architecture that IBM calls TrueNorth.

TrueNorth departs from the traditional Von Neumann computing architecture that has dominated the industry since 1946. In a SyNAPSE chip, each core contains memory, computation, and communication circuits and is designed for parallel processing. This helps avoid the bottlenecks in traditional computer designs that arise from limited connections between systems.

SyNAPSE chips are event-driven rather than clock-driven. They run cooler than other chips because they aren't running all the time. They're designed to work with one another, tiled together. Arranged in this manner, the chips can communicate in parallel to create a failure-tolerant mesh supercomputer. 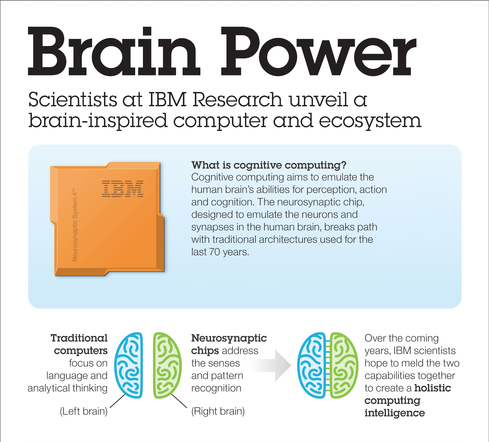 When IBM debuted a prototype in 2011, SyNAPSE had a single core. The new second-generation model has 4,096 neurosynaptic cores, but consumes only 70 mW while operating. That's somewhere from hundreds to a thousand times less than the chips found in most desktop and laptop computers today.

Such energy efficiency, IBM hopes, will enable the simulation of a trillion synapses using only 4 kW of power. That's short of the 100 trillion synapses estimated in the human brain, but IBM already demonstrated that it can map the pathways in a Macaque monkey brain.

"These brain-inspired chips could transform mobility, via sensory and intelligent applications that can fit in the palm of your hand but without the need for WiFi," said Dharmendra S. Modha, IBM Fellow and chief scientist of brain-inspired computing at IBM Research, in a statement. 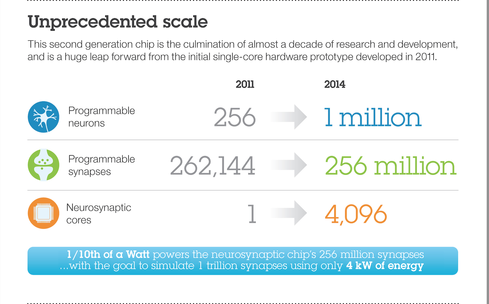 IBM sees potential in SyNAPSE chips as a way to capture real-time information, for applications that could, for example, help a blind person navigate through a crowded environment with moving obstacles. The technology could also be useful in self-driving cars or other automated systems that depend on processing vast amounts of sensory data in real-time.

The SyNAPSE chip is just one part of a larger ecosystem designed to support the TrueNorth architecture through development, debugging, and deployment. To help people understand how to write passively parallel cognitive code, IBM has developed a simulator called Compass; a neuron model specification; a programming model based on building blocks called "corelets"; a corelet programming library; and a laboratory teaching curriculum.

The Systems of Neuromorphic Adaptive Plastic Scalable Electronics (SyNAPSE) program has been funded by the Defense Advanced Research Project Agency (DARPA) since 2008. DARPA has invested $53 million in the project to date. Cornell Tech and iniLabs also participate in the research.

InformationWeek's new Must Reads is a compendium of our best recent coverage of servers. Find out which vendors are the Hadoop leaders, why Texas is a hotbed of IT training, how microservers and blade servers compare, and more. Get the new Must Reads: Servers issue of InformationWeek Must Reads today (free registration required).

Thomas Claburn has been writing about business and technology since 1996, for publications such as New Architect, PC Computing, InformationWeek, Salon, Wired, and Ziff Davis Smart Business. Before that, he worked in film and television, having earned a not particularly useful ... View Full Bio
We welcome your comments on this topic on our social media channels, or [contact us directly] with questions about the site.
Comment  |
Email This  |
Print  |
RSS
More Insights
Webcasts
Protecting Your Enterprise's Intellectual Property
Strategies for Success with Digital Transformation
More Webcasts
White Papers
Zero Trust Evaluation Guide
Passwordless: The Future of Authentication
More White Papers
Reports
The State of Threat Detection and Response
How Data Breaches Affect the Enterprise (2020)
More Reports

The multiple core , event driven rather than clocked nature of the chip is reminiscent of http://www.greenarraychips.com/ 144 computer chips .
Reply  |  Post Message  |  Messages List  |  Start a Board

This idea of a mesh network using these chips for a new type of architecture design is really interesting to me.

I don't pay too much attention to future hardware designs like this one from IBM, but what I do know is that there is demand to build brand new types of systems in order for the industry to proplel itself forward.
Reply  |  Post Message  |  Messages List  |  Start a Board

This is really a great leap-forward in processor technology. It's a fundamental architectural change instead of just some fine-tuning/enhancement. For sure after it's widely adopted, there will be evolution happen in different industries. The low power consumption is a big advantage - it means that the portable device can last much longer without charging.
Reply  |  Post Message  |  Messages List  |  Start a Board

This is further evidence that computer technology will pass the Turing Test by 2020 and that by 2030 humans will be unable to compete with robots for any job whether manual, professional or managerial.  We are fast approaching the time when wages will no longer be an effective means of wealth distribution.  The only alternative is the welfare state and individual freedoms will be determined by how widely spread asset ownership will be.
Reply  |  Post Message  |  Messages List  |  Start a Board

I wonder what would be some of the differences in the principles of programing for a chip with a few yet powerful cores vs. billions of cores that are weak. Pattern recognition would be a nice ability to automated, but I feel it would require a lot of random computation.
Reply  |  Post Message  |  Messages List  |  Start a Board

Is who's brain it mimics? Beavis? Butthead? Cartman? Or even worse, anyone currently in US Congress.
Reply  |  Post Message  |  Messages List  |  Start a Board
Editors' Choice
Hot Topics