Retailers can now count the products on their shelves with the help of a roving robot from Simbe Robotics. The use-cases for automating such drudgery, and tying the findings to an analytics application, have relevance for IT executives across a range of industries.

In comments provided for a Pew Research report last year, writer and futurist Jamais Cascio predicted that by 2025 robots will be taken for granted.

"From self-driving taxis to garbage collectors to autonomous service systems, machines will start to exist in our social space the way that low-paid (often immigrant) human workers do now: visible but ignorable," wrote Cascio.

We're not there yet. Robots of the sort that get noticed -- autonomous, self-propelled machines -- still attract attention because people don't encounter them often in their daily lives.

But that's beginning to change. Some 14 million households worldwide have bought a Roomba robot vacuum cleaner. At least five hotels in Silicon Valley have been testing Savioke's Relay robot to delivery small items to guests. Starship, a robotics startup, plans to begin testing a delivery robot in the UK and the US shortly. Self-driving cars from Google and other companies are also being tested in small numbers on public roads.

[Where does Arduino Fit in the IoT? Read 6 Internet of Things Building Blocks.]

Fixed automated systems, such as self-checkout stations in groceries stores, are already common, though people don't think of them as robots. But retail customers soon may see something more like traditional depictions of robots.

On Tuesday, Simbe Robotics introduced Tally, an autonomous robot designed to help stores keep track of the products on their shelves. 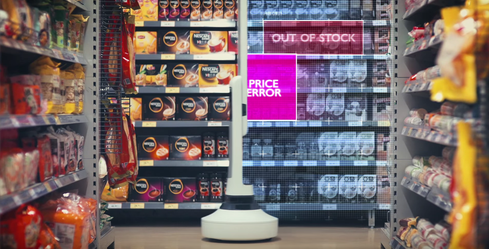 Brad Bogolea, CEO and cofounder of Simbe Robotics, said in a phone interview his company is focused on automating the many mundane tasks of retailing, like inventory auditing.

Tally, as its name suggests, will navigate store aisles to identify available merchandise using image recognition. It will report what it finds so that its data can be compared to the store's planogram -- its map of optimal inventory placement on shelves -- and can feed the merchant's analytics systems.

The concept has been around for years. Google sought a patent for recognizing text in images back in 2006, and described indexing products in grocery store aisles with a robot as one possible application of its image-processing software. Tally realizes that vision.

Vision might not seem like the ideal sense to apply when it comes to assessing product inventory, given that products on the front of shelves may conceal what's behind them. But Bogolea said that the goal for retailers tends to be maximizing product availability -- avoiding empty shelves -- rather than obtaining a precise shelf inventory. Globally, he said, retailers lose half a trillion dollars annually due to products being out of stock. The images Tally captures can still be used to estimate product counts.

RFID tracking is an option employed by sophisticated retailers, but Bogolea said it tends to be useful only for certain scenarios on the supply chain side, when merchants are dealing with large volumes of products. While some retailers use RFID tags on high-end products, he said they don't use the technology for fast-moving single items.

Tally's base is 38 inches tall (96.5 centimeters), with a sensor mast that can be adjusted in accordance with the height of store shelves, up to about eight feet (2.44 meters). The unit weighs about 30 pounds (13.6 kilograms).

The robot has been designed to navigate around people as it audits merchandise, and to return to its charging dock to recharge. It runs the Robot Operating System (ROS), an open-source robotics framework used in a variety of autonomous systems.

Tally is offered as a service rather than as a one-time purchase: It sends its imagery to Simbe's servers for analysis, and the company provides data back to its customers.

Asked whether Simbe would provide imagery to clients for purposes unrelated to inventory management -- such as to review a security incident -- Bogolea said the company has only used captured imagery to generate analytics data. Still, he acknowledged that clients might seek to explore other potential uses of the pictures recorded in their stores. If and when this happens, it could raise privacy concerns in cases where retail customers weren't informed that the stock-tracking robot was moonlighting as a security camera.

Tally can save stores a significant amount of time-consuming work. Bogolea said that a small store might spend 25 hours per week auditing the products on its shelves. Tally, he said, can do that work in 30 minutes. It can capture 15,000 to 20,000 SKUs per hour.

What's more, it appears that retailers believe manual inventory auditing is inaccurate. A 2011 Aberdeen Group report found that 70% of retailers it surveyed rated their inventory management processes "average" or "below average."

Employees don't mind seeing Tally do their work, Bogolea explained, because the work is drudgery. "We have yet to meet a person who really enjoys auditing," he said. Like others in the robotics industry, he asserted that automating repetitive tasks frees people to take on more valuable work.

"We see resources shifting, not going away," said Bogolea, noting that retailers will probably direct employees to focus on customer service, because the customer experience is what differentiates brick-and-mortar stores from online merchants.

Thomas Claburn has been writing about business and technology since 1996, for publications such as New Architect, PC Computing, InformationWeek, Salon, Wired, and Ziff Davis Smart Business. Before that, he worked in film and television, having earned a not particularly useful ... View Full Bio
We welcome your comments on this topic on our social media channels, or [contact us directly] with questions about the site.
Comment  |
Email This  |
Print  |
RSS
More Insights
Webcasts
Protecting Your Enterprise's Intellectual Property
ROI and Beyond for the Cloud
More Webcasts
White Papers
Two-Factor Evaluation Guide
The State of Threat Detection and Response
More White Papers
Reports
2020: Threats in Review
The Future of Multi-Cloud Networking 2020
More Reports

Around 70 million wearable devices were shipped in 2014, this brings 14 million robot vacuum cleaner sales by just one company into perspective and it is surprising to see that the consumer market has already grown quite a bit.

Tally might be able to perform security functions. It also seems likely that store employees would want it to have a floor mopping function.
Reply  |  Post Message  |  Messages List  |  Start a Board
Editors' Choice
Hot Topics