Life on a Formula One racing team is part Moneyball, part video game.

"It is like racing games, You've got all the tracks with the cars and where they are" on a display, said Graeme Hackland, CIO for the Lotus F1 racing team.

Putting race data at the fingertips of the race engineer has been "the huge change" in the IT aspect since Hackland started at Lotus F116 years ago, when it was known as the Benetton team. "Instead of a couple of smart guys on the pit wall, doing intuitive decision-making, now we have over 200 sensors on the car," said Hackland.

Those sensors can create real-time alarms on brakes, tires, fuel and other factors that affect car performance during a race. Plus, there's now a post-race analysis, which looks at the car's performance in light of weather conditions, track temperatures, the specific batches of tires used in the races, and so on.

[ Is big data poised for a backlash? Read Big Data: 6 Ways To Find What Matters. ]

"Everything we do within the IT group is focused on applications to analyze data to be on the track, or shorten the design cycle or manufacturing cycle," he said. Lotus employs 540 people, about 40 in IT. Half of the IT staff is developers, and 80% of the IT budget goes to applications and application development. Working on aerodynamics for the cars is the place where IT has the most impact, but it's important to have good performance on race day. 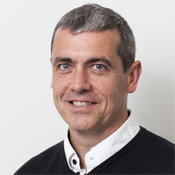 Lotus F1 CIO Graeme Hackland
Hackland's environment is less big data than fast data. His cars aren't generating terabytes or petabytes of data. What he needs is the ability to compare data from the car in real-time with data from past seasons, modeling in weather conditions, the state of the race, competitor strategies and so on. "Our big challenge is making decisions within 30 seconds," he said.

Even though speed matters, until a couple of years ago, Hackland's team didn't even use agile programming.

"I think we stuck with waterfall for far too long, frankly," Hackland said. Now, his teams work in agile-style scrums, shoulder-to-shoulder with their customers, the team's designers and race engineers. He has developers embedded in both the aerodynamics group at the team's manufacturing site and the racing team, the two core parts of Lotus' racing effort.

The move to agile was prompted by an expensive project that wound up shelved. "I was really frustrated with that and my management team was frustrated. We went months down the line only to find the (racing) team didn't want the app anymore," he said. Agile development has led to more "intuitive" development work, Hackland said. Although Lotus F1 develops a good deal of its own code, Hackland also works closely with some vendors, such as Avanade, the Microsoft/Accenture joint venture. The team runs its factory on Microsoft Dynamics, Juniper to run the network, and for a virtualization project he works closely with EMC.

Virtualization already is widely used in its factory environment, but not much at all on the client side. Hackland wants to add more virtualization to help the team shift data easily from Lotus F1's private cloud into the public cloud. For instance, when the cars are in transit between races, they are also off the network. Having a way to transition the cars onto a public cloud might allow for software updates and other updates while the cars are not on the company network.

That work is all focused on one thing: getting two cars and two drivers onto the winner's podium every race, and to win a championship. Hackland thinks IT's expertise can make a big difference for the team next season, as the F1 rules change in 2014. The last time F1 made major rules changes, the Lotus team (then known as Renault F1) won championships in 2005 and 2006.

"The next two seasons are our best opportunity in a while," he said.

We welcome your comments on this topic on our social media channels, or [contact us directly] with questions about the site.
Comment  |
Email This  |
Print  |
RSS
More Insights
Webcasts
ROI and Beyond for the Cloud
5 Steps to Solving Modern Scalability Problems
More Webcasts
White Papers
How to Prioritize Risk Across the Cyberattack Surface
Presenting Your Cloud Security Strategy to the Board
More White Papers
Reports
Assessing Cybersecurity Risk in Todays Enterprises
2021 Top Enterprise IT Trends
More Reports