Companies adopting NoSQL databases are graduating from experiments and early deployments to running scores of production applications, according to Couchbase. Mission-critical demands are going to make Multi-Dimensional Scaling, a new Couchbase feature announced Monday,  a competitive differentiator, according to the NoSQL database vendor.

Set for release this summer as part of Couchbase Server 4.0, Multi-Dimensional Scaling promises to give customers the ability to isolate and optimize database read-write, indexing, and query workloads by assigning specific nodes and resources to each task. As a result, Couchbase would be able to support more demanding workloads and a greater diversity of apps without throwing more hardware at the problem.

"Nobody wants to compromise on the performance of basic database reads and writes, but that often happens when you need to build lots of indexes or run intensive queries," said Bob Wiederhold, Couchbase CEO, in a phone interview with InformationWeek. "With Multi-Dimensional Scaling, you have the option to run those tasks on different servers [in a distributed cluster]."

In an example of how customers might take advantage of the new feature, Wiederhold said Couchbase customers like Neiman Marcus or Nordstrom could expand on read-write-intensive customer-profile applications by adding sophisticated query capabilities.

"If they want to find out how many men between the age of 18 and 25 bought loafers in July east of the Mississippi, they could blend product-purchase data in with the customer-profile data," Wiederhold said. Specific nodes could be assigned to handle the queries and others to handle indexing of notable attributes without detracting from core read-write performance.

The big win with the new feature is "dramatically higher performance," according to Wiederhold. Couchbase competes against NoSQL rivals including MongoDB and Cassandra.

"We've always had advantages in read-write performance, but now we're going to substantially extend our lead in terms of indexing and query performance," Wiederhold said. 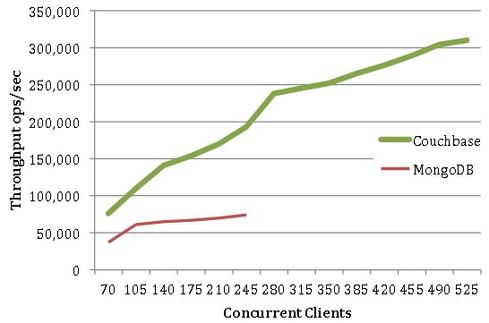 A head-to-head test by Avalon Consulting being promoted by Couchbase (above) contends that Couchbase's current product delivers higher performance than NoSQL rival MongoDB 3.0 with its WiredTiger storage engine.

Taking a swipe at these claims, Couchbase last week released a whitepaper by Avalon Consulting Llc. that shows, among other findings, that "Couchbase Server provided 2.5x the throughput of MongoDB with the same number of concurrent clients."

MongoDB could not be reached in time for publication to comment on the Couchbase announcement or Avalon's database comparison. We'll share any statements in the comments area below this article as they become available. [Author's note: after publication of this article, MongoDB commented that Avalon's test approach favored Couchbase with three times greater hardware capacity than MongoDB and did not follow MongoDB-recommended deployment and performance-optimizaiton practices. See detailed comments from MongoDB below.]

Doug Henschen is Executive Editor of InformationWeek, where he covers the intersection of enterprise applications with information management, business intelligence, big data and analytics. He previously served as editor in chief of Intelligent Enterprise, editor in chief of ... View Full Bio
We welcome your comments on this topic on our social media channels, or [contact us directly] with questions about the site.
Comment  |
Email This  |
Print  |
RSS
More Insights
Webcasts
Zero Trust for a Work-From Home World
Optimizing App Performance in the Cloud
More Webcasts
White Papers
Why Add Security to Your Skill Set and How to Do It
Are We Cyber-Resilient? The Key Question Every Organization Must Answer
More White Papers
Reports
The State of DevSecOps Report
Building an Effective Cybersecurity Incident Response Team
More Reports

Our study was a fair and valid comparison of the two products. Based on the study's parameters, Avalon provided the exact same hardware resources and enabled the same durability and failover setup for both Couchbase and MongoDB.

For the purposes of this test, preventing loss of data was one of the core parameters as this is a necessary feature for the types of enterprise clients we work with. Couchbase prevents loss of data by providing 2 additional replicas besides the master copy on every node. Each node consumes 2/3's of the computational and storage capacity for replica maintenance. With the 2 additional replicas, Couchbase provided the desired durability and failover support. Couchbase Server reads and writes on every node; MongoDB relies on a master/slave architecture that can only execute reads and writes on primary nodes. Because of this, both vendors use the identical amount of hardware but each is configured differently to optimize each product.

It is irrefutable that both MongoDB and Couchbase were placed on a level playing field for the test Avalon conducted.

We couldn't reach MongoDB in time for comment on this story, but here are responses on both the Avalon test and Couchbase's Multi-Deminsional Scaling feature from m Kelly Stirman, Director of Product at MongoDB.

Regarding the Avalon benchmark:

The test results in the report published by Avalon cannot be used to compare the two products. Couchbase is provided 3x the active hardware of MongoDB, and it is configured to maximize throughput by disabling automatic failover and by sacrificing durability, increasing the chance of data loss. In these tests MongoDB is provided one third the active hardware, has automatic failover and high availability enabled, and it is configured to ensure durability of writes, preventing data loss. If MongoDB were configured comparably to Couchbase in these tests, the results would be dramatically different. Avalon did not follow our published best practices, and MongoDB did not participate in the design of these tests. Readers may wish to consult our own published benchmarks using the same tests as Avalon, where MongoDB 3.0 shows excellent throughput and low latency.

Regarding the Couchbase announcement:

Some vendors have a tradition of announcing new products many months before their availability, usually at one of their public events. This announcement is no different. In the absence of any documentation or details about these features it is hard to know what Couchbase hopes to deliver in the future. It does appear they are looking to close the gap on other products in the market who have offered these capabilities for many years now. According to DB-Engines.com, which incorporates web searches, technical discussions, job postings, and skills on LinkedIn, Couchbase trails all other NoSQL products in adoption. We will have to wait and see if this announced release moves the needle for Couchbase.
Reply  |  Post Message  |  Messages List  |  Start a Board
Editors' Choice
Hot Topics