Many customers already run Cloudera's software on AWS, but they do so in a two-step process in which they license and download the software from Cloudera and then deploy it on AWS cloud infrastructure. That two-step approach is still in place as of today, but the partnership calls for that process to be collapsed into a single step. The new approach will not only speed and ease deployment, it will bring Cloudera's entire stack to the cloud for production use, according to Tim Stevens, Cloudera's VP of business and corporate development.

"The cloud use cases to date have typically been for research and development, testing, and proof-of-concept experimentation," said Stevens in a phone interview with InformationWeek. "Now we're bringing a certified and supported, enterprise-data-hub experience to the Amazon cloud."

"Enterprise data hub" is Cloudera's vision for the broad use of its platform as the first destination and center of data-management activity within enterprises. Where test-and-dev deployments on AWS have been limited to Cloudera's core open-source Hadoop distribution, Stevens said the partnership will bring more extensive deployments including Cloudera Manager, Cloudera Impala, and Cloudera Search.

What kinds of companies are interested in running high-scale, production Hadoop clusters in Amazon's cloud? The most obvious candidates are Internet firms and media companies running on AWS infrastructure and storing vast quantities of data in its cloud. But large telecommunications companies, financial services, and retailers are also looking to bring at least some of their data into the cloud, says Stevens. 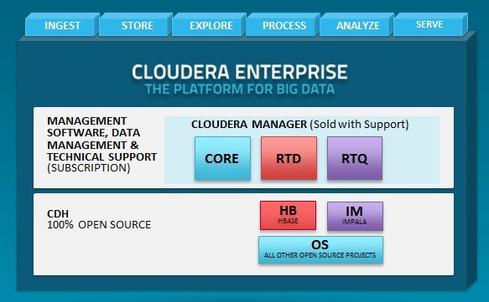 Cloudera isn't the first Hadoop distributor to forge cloud partnerships. MapR struck up relationships with both Amazon and Google in 2012, and MapR instances have been available directly on AWS for more than a year. Hortonworks is partnered with Microsoft, and the Windows-based version of its software has been available as a service on Azure since early this year. IBM, Pivotal, and Teradata have also introduced cloud deployment options for their Hadoop offerings.

Cloudera ramped up its cloud activity in October with the introduction of Cloudera Connect: Cloud. That program counts Savvis (a CenturyLink company), SoftLayer (an IBM company), T-Systems, and Verizon Cloud as service partners, and Amazon is now joining the club.

Cloudera will provide the first line of support for AWS deployments, and it will use its Cloudera Manager systems-management software to determine whether any problems experienced are related to software or hardware.

"If it's a hardware or infrastructure problem, we have a hotline into the Amazon support structure to be able to address that right away," says Stevens.

Will most enterprise cloud deployments of Cloudera's software continue in the proof-of-concept mold? Only time will tell as companies weigh agility and low-touch infrastructure management against the cost, control, and perceived security of storing high-scale data in the cloud.

We welcome your comments on this topic on our social media channels, or [contact us directly] with questions about the site.
Comment  |
Email This  |
Print  |
RSS
More Insights
Webcasts
What We Can Learn from Sports Analytics
Strategies for Success with Digital Transformation
More Webcasts
White Papers
How to Prioritize Risk Across the Cyberattack Surface
ROI Study: Economic Validation Report of the Anomali Threat Intelligence Platform
More White Papers
Reports
The State of Cloud Computing - Fall 2020
2020 Threat Hunting Report
More Reports

I recall attending Hadoop World in 2009 (500 ish people at the Roosevelt Hotel) and Amazon had just released Elastic Map Reduce. Why it took this long to see a Cloudera-AWS combo is beyond me, but it's a good thing whatever egos got in the way are now in check.
Reply  |  Post Message  |  Messages List  |  Start a Board

A Hadoop service on Amazon, backed by the tools and expertise of Cloudera? I can see why Amazon is willing to partner and make that a one-step process. Think more Hadoop clusters running on EC2. And Hadoop users are prime beneficiaries of the cloud's elasticity. Spin it up when you need it; shut it down when you don't People who believe there's no economic benefit to cloud computing should study how companies use Hadoop.
Reply  |  Post Message  |  Messages List  |  Start a Board
Editors' Choice
Hot Topics