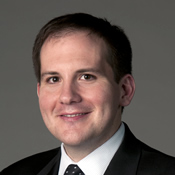 Consulting firm Booz Allen Hamilton saw the promise of big data and cloud computing earlier than most, and started making significant investments in both back in late 2008. Heading these initiatives then, as now, was Dr. Josh Sullivan, the senior technical leader in emerging technologies, complex software development and large-scale data analytics. In addition to his work at Booz Allen, Sullivan is the founder and leader of the Washington, D.C.-area Hadoop User Group, the nation's second-largest Hadoop user group, with some 1800 members.

Tenure at current job: 8 years, focusing on our big data and cloud practice since late 2008.

Size of IT group: We have several thousand IT professionals within Booz Allen. Our data sciences and cloud services team is just north of 610 people. It's two distinct groups: There's a smaller, 220-person data science group that is very focused on that domain, and then there are cloud, software, infrastructure and security folks [making up the rest].

What's been your experience hiring data scientists? The demand is far higher than the supply for data scientists. We've taken a twofold approach. We speak at Strata and we give talks all across the U.S., mostly as a way to do hiring and branding. So we attract people that way. [Also], since the spring of 2009, we've had our own data science boot camp. We take people we think have that "X factor," that intellectual curiosity and ability to think differently about asking questions of data, and we run them through this pretty intensive camp so they can go help clients.

[Hiring] is tough, it's very tough. We're fortunate that we've been at this since late 2008 and early 2009, when we had an Aha! moment: "This is going to be a big deal." And we put up a lot of investment around it early. That gave us some lift, and we hired some marquee [data scientists] and use that to drive our agenda around hiring. But it takes constant, dedicated focus, using our relationships with vendors, academia and well-known data scientists. We use all those avenues to hire and train our folks.

How will 2013 be different in terms of hiring? "Data scientist" is becoming a buzzword, and so a lot of people knock on the door saying, "I'm a data scientist." But they're really just people who can use Excel and don't have the right skillset yet.

Career accomplishment of which I'm most proud: I'm most proud that in 2008 we saw cloud and big data as a game-changer. We stepped back and said, "We need something different." So we put a lot of R&D and dollars around that. And that allowed us to create a cloud reference architecture and put a lot of thought into how we were going to deal with structured, unstructured and streaming data. We've built a large data science team, published IEEE papers, spoken at major conferences ... that's something new for Booz Allen. I'm proud we're out there doing leading-edge work.

Most important career influencer: Certainly my mother. When I was in high school and thinking about colleges, I was focused on being a chemical engineer. My mother bought me circuit boards, an early 8086 computer and some programming books. Her hypothesis was that computers were going to be the next big thing, and she encouraged me to go that route. And that led to an entire academic career around computer science and a technology career.

Most disruptive force in my industry: The rapid pace of skill change and technology evolution.

What I've learned about getting the most out of a team: I'm a huge believer in setting a technical agenda, an innovation agenda and a vision for the team. Those are the three things I always talk to the team about. Then I let them loose and let them harness their entrepreneurial spirit. If you tell them the context of how they fit in, tell them the bigger picture and why what they're doing is important, people will pour their hearts into their work, and they will be inspired and surprise you every time.

What I look for in an employee: First thing is curiosity -- the ability to learn and the drive to learn. I frankly don't care that much if they have technical knowledge; I think we can teach them that. I want them to have the motivation and the curiosity to go tackle a nebulous problem.

Most common reason IT projects go wrong: A lot of executives and stakeholders think that IT systems are a panacea that are going to solve organizational problems and skill deficiencies. [When it comes to big data] they don't think broadly; [they] don't think about game-changing questions.

Dr. Josh Sullivan At A Glance
Education: B.S. in computer science (management systems) from Missouri University of Science and Technology; M.S. in IT from Johns Hopkins University; and a Ph.D. in applied computer science from Northcentral University. Person I'd most like to have lunch with: Alan Turing. First job: I fixed people's computers when I was 15 years old. If I weren't involved in data analytics: Photography or chemistry.

We welcome your comments on this topic on our social media channels, or [contact us directly] with questions about the site.
Comment  |
Email This  |
Print  |
RSS
More Insights
Webcasts
Key technology trends in 2021 - Making these technologies work for your business
Hybrid Cloud: The Great Balancing Act
More Webcasts
White Papers
Why Add Security to Your Skill Set and How to Do It
Balancing Hybrid Storage as Part of a Hybrid Cloud Data Management Strategy
More White Papers
Reports
The State of Threat Detection and Response
Building an Effective Cybersecurity Incident Response Team
More Reports

CRM Trends 2021: How the Pandemic Altered Customer Behavior Forever Jessica Davis, Senior Editor, Enterprise Apps,  2/18/2021
White Papers
Why Add Security to Your Skill Set and How to Do It
Improving Security by Moving Beyond VPN
MontanaPBS Shifts to Agile Broadcasting with Help from Raritan KVM Solutions
The Hidden Security Risks of APIs: How to Protect Your Brand, Business, and Data
Data Orchestration: Critical Elements for Data Strategy and Infrastructure