AI and machine learning won't create massive job losses in the foreseeable future, but some societal issues do come to mind.

There's a perception of what artificial intelligence and machine learning mean to the breadth of the workforce: Truck drivers, middle managers, factory workers, even the programmers who teach the machines, all destined to unemployed years spent sprawled on the couch, watching soap operas, eating pizza, and swilling beer.

Granted, some out there might think that's a mighty fine way to live out their years. But don't call Dominos yet.

While all of us have thoughts about what AI means to the workplace, MIT assembled a panel of five experts who are close to the action, including several who build intelligent systems. They spoke at the MIT Sloan CIO Symposium in Cambridge, Mass., last week, on a panel discussion entitled "Putting AI to Work."

There were four key takeaways:

Josh Tenenbaum, a professor in the Department of Brain and Cognitive Sciences at MIT, noted that most AI applications today are based on pattern recognition. "There are things that robots can't do, like when the unexpected happens…It's not like they are going to replace humans any time soon."

Tenenbaum cited as an example of "the unexpected" a scenario where if someone in the front row of the audience of 800 IT executives and thought leaders was having a medical emergency, "I could jump down off the stage and try to help." A robot wouldn't know to do that, he said.

[Learn more about AI and Machine Learning. Sign up now for the next edition of the A2 Academy.]

Tenenbaum argued that with machines taking over some mundane tasks that would free up humans to do more interesting "long tail" work that requires thought and reason.

Ali Azarbayejani, CTO of Cogito Corp., outlined how his company's AI-based tools serve two core purposes in call centers. On one hand the software provides trend information for managers so they can see patterns such as the most common problems. But for call center agents the software actually offers real-time coaching, with advice such as "you're talking too fast."

"We believe our tools aren't going to replace humans, but help them do their job better," he added. 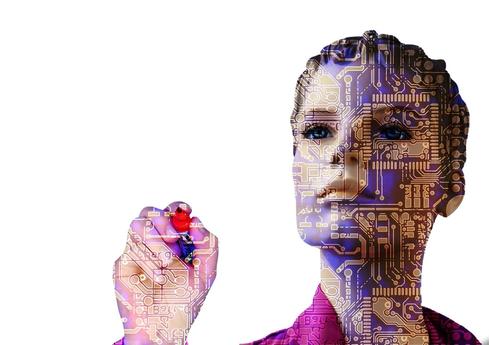 Another example of what AI and machine learning are doing in the workplace came from Ryan Gariepy CTO and co-founder of Clearpath and OTTO Motors, which builds self-driving vehicles, primarily for materials handling in manufacturing and warehouse environments.

Gariepy noted that about one third of the cost of anything we buy is in handling, "people moving things." It's an area where people are expensive and robots make sense. However, he highlighted that fact that robots today cannot work in a completely human-less environment. Sometimes robots get confused, sort of lost. "You're going to have to help the robot now and then," he said.

Moderator Joi Ito, director of the MIT Media Lab, pointed out that one of the challenges as we move forward with AI-based systems is that CIOs still face problems finding people to build, train and manage systems, particularly with Google, Facebook, IBM, and startups grabbing so much data science talent.

Ito suggested that we need better tools, "so you don't have to be a PhD to train a machine, so subject experts can do that rather than having an expert in technology do it."

When Ito asked the panel what new jobs might emerge in an age of AI, Seth Early, CEO of Early Information Science, noted how technological advances throughout history have created new jobs, adding, "The things that we are developing are going to lead to things that we can't even imagine today."

But what happens to the truck driver who is replaced by the intelligence of an autonomous vehicle? "I feel strongly there has to be consideration of the social aspect," said Gariepy, noting that it wouldn't be easy for an older, unemployed truck driver to go back to school to learn a new job.

The discussion included Tenenbaum suggesting that the rapid changes that technology brings about requires a rethinking of the education system, shifting from one where young people go to school to prepare for a life-long career to an educational approach that is focused on life-long learning and retraining as the job market continually shifts.

Jim Connolly is a versatile and experienced technology journalist who has reported on IT trends for more than two decades. As editorial director of InformationWeek and Network Computing, he oversees the day-to-day planning and editing on the site. Most recently he was editor ... View Full Bio
We welcome your comments on this topic on our social media channels, or [contact us directly] with questions about the site.
Comment  |
Email This  |
Print  |
RSS
More Insights
Webcasts
Cybersecurity Risk Management
Managing a Hybrid Cloud Infrastructure
More Webcasts
White Papers
2020 SANS Enterprise Cloud Incident Response Survey
The Top 5 Mistakes Everyone is Making in Vulnerability Remediation
More White Papers
Reports
Are Unprotected Cloud Databases Leaking Your Data?
The State of Cloud Computing - Fall 2020
More Reports
Copyright © 2021 UBM Electronics, A UBM company, All rights reserved. Privacy Policy | Terms of Service