Events held at Microsoft and Samsung in New York highlight the need for data scientists to maintain humanity in AI development.

Somewhere between hyper speculation and worries of machines conquering the planet rests the reality of the work artificial intelligence can do -- under the right guidance.

Earlier this month, MissingLink.ai organized an event at Samsung NEXT in New York, an accelerator for software and services startups, to examine “How AI is Changing the World.” That same week, the AI Tech Summit, was held at Microsoft’s Times Square offices in New York. Both events offered a snapshot of the potential impacts of AI, for good or ill, and how humanity remains part of the equation.

Presenters for the event at Samsung NEXT were largely early-stage developers of AI though some tackled problems that enterprises and other large organizations face. In some instances, the processing of data through AI can have readily identified benefits to industries and their end users. For example, Ella Alkalay Schreiber, vice president of data science for Hopper, discussed her company’s use of AI to drive its app, which consumers use to find and book air travel at potentially lower rates than they could find on their own. She described the patterns seen across the travel industry, where pricing changes daily or even hourly as travel dates get closer. “This is how airlines do revenue management,” Schreiber said. “They constantly look at demand in searches and their capacity.” 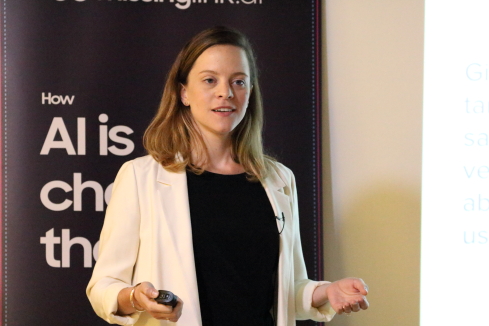 Hopper’s algorithm, she said, generates target price predictions derived from the company’s data to alert consumers to what may be the best rate for a trip. “Hopper has a huge and very unique database,” Schreiber said. “Every day we archive prices from all across the Web.” That data includes flight origins, destinations, prices, different carriers, and fair rules. She said the company now has five years of historical data that amounts to trillions of data points on pricing to help generate forecasts and understanding of year-over-year variances. “Airlines are very interested in this,” Schreiber said.

Despite such surface-level benefits there remain concerns of AI technology being abused in ways that go undetected by end users. Jesse Freeman, chief evangelist at MissinLink.ai, said the positive prospects of AI should be tempered with a watchful eye for risks such as deepfakes, where video imagery is manipulated by AI in near seamless ways. Examples of deepfakes have included making it appear as if celebrities or politicians made statements they did not. “I saw one where Rasputin was animated to a Beyoncé song,” Freeman said. “It’s really fascinating but also very dangerous.” He said the advancement of AI should include an understanding of what is ethical while identifying fakery.

On the upside, he said AI does have obvious beneficial uses such as generating automatic alerts of threats and risks based on data, analysis of DNA for the creation of new medicine, and safety surveys of construction sites via drone cameras. As organizations implement deep learning and other technology to become “AI-first,” he said a human touch is still required to keep these tools grounded in goodwill. “Every company is going to need a data scientist,” Freeman said. “Every company is going to need a data engineer because they need someone to tell you what the relevant data is.”

AI has drawn the attention of the government sector that wants to be more efficient while upholding the public’s best interests. Youssef Kalad, program director with NYCx, spoke on this at the AI Tech Summit. NYCx is part of the Mayor’s Office of the CTO for New York City and runs competitions to encourage technologists to use their resources to address community needs.

Kalad said that skepticism and questions about what technologists and AI do with the data they collect have increased in recent years. Such sentiments may stem from a sense of disappointment in the “future” society expected to live in versus the reality. The tech hype seen at the start of this millennium also came with economic upheaval. “There is a feeling that tech, despite all of its promise for humanity, isn’t delivering,” he said. “It’s not quite doing what we thought it could do and hoped it would do.”

AI could be used to the greater benefit of the public, Kalad said, by addressing the disconnect between technologists and their end users. The inherent biases of tech builders can influence product creation, he said, which can result in suboptimal experiences or worse for end users. Kalad said he hoped to see more diversity in the development of technology and the people behind it, which can lead to more inclusive products. “Too often technologists fail to think about who they were building for and who’s going to benefit most from that product or solution,” he said.

Joao-Pierre S. Ruth has spent his career immersed in business and technology journalism first covering local industries in New Jersey, later as the New York editor for Xconomy delving into the city's tech startup community, and then as a freelancer for such outlets as ... View Full Bio
We welcome your comments on this topic on our social media channels, or [contact us directly] with questions about the site.
Comment  |
Email This  |
Print  |
RSS
More Insights
Webcasts
How the Rapid Shift to Remote Work Impacted IT Complexity and Post-Pandemic Security Priorities
Using MS Teams as Your Phone System - FREE Event 4/14
More Webcasts
White Papers
2020 SANS Enterprise Cloud Incident Response Survey
The Top 5 Mistakes Everyone is Making in Vulnerability Remediation
More White Papers
Reports
The Need for Speed: Second Generation EDR
Trustwave Global Security Report
More Reports