50%
Tweet
From more powerful body armor to better tasting food, these technologies in development aim to improve the life and safety of military service members. 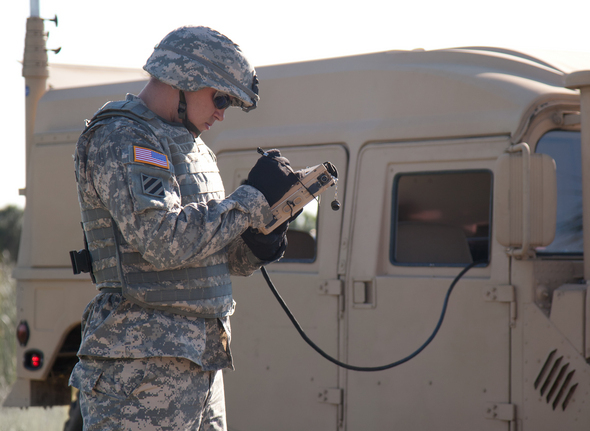 A team of scientists at the Army Research Laboratory are helping develop light, portable prototype systems that could convert jet propellant 8 -- a.k.a. JP-8 -- to hydrogen for portable electric power. Developing a practical fuel reformation process is just one of many innovations in the works at Army labs, with some already being tested in the field.

Keeping such systems light is a key priority for the Army. Many of its projects focus on technologies that can reduce the weight of equipment without compromising the safety of soldiers. The Aviation and Missile Research, Development and Engineering Center (AMRDEC) Prototype Integration Facility recently designed and installed a model of an enhanced Ballistic Protection System (BPS) in the cabin of the UH-60 Black Hawk aircraft. Such systems are designed to shelter personnel, equipment and supplies against missiles, but they're typically built using heavy materials. Thanks to advances in lightweight composites, Army researchers have been able to reduce the mass of a BPS. The enhancements are expected to decrease the weight of the current Black Hawk BPS system by 500 pounds.

Survivability is another big issue. Researchers are constantly finding new ways to protect soldiers on the battlefield. The most recent example is the Tactical Assault Light Operator Suit (TALOS), which has been labeled as a real-life Iron Man suit. The Special Operations Command issued a solicitation in May, asking private companies, research and development organizations, academia, and government labs to submit technology demonstrations that could lead to collaboration between the government and the private sector to develop capabilities for TALOS.

The Army describes TALOS as an "advanced infantry uniform that promises to provide superhuman strength with greater ballistic protection." The suit will include wide-area networking and on-board computers, enabling better situational awareness in the field. TALOS will also have a physiological subsystem that touches the skin and uses sensors to monitor core body temperature, skin temperature, heart rate, body position and hydration levels. Scientists at the Massachusetts Institute of Technology are in the process of building the armor, which is made from magneto rheological fluids -- a liquid body armor that shifts from liquid to solid when it hits a magnetic field or electrical current. The first demonstration took place in July to identify technologies that could initially be integrated into TALOS within a year. TALOS could be seen in the field within the next three years.

InformationWeek Government has been closely following military technologies. Explore our slideshow to learn more about the Army's latest innovations.

I was thinking the leap from altitude sickness to motion sickness might not be that large. I hear you on the data centers, some of the interesting ones are underground not up in the air :)
Reply  |  Post Message  |  Messages List  |  Start a Board

The TALOS project is well along MIT also has an interesting future soldier initiative. Technologies for survivability certainly are the right priority for Army research.
Reply  |  Post Message  |  Messages List  |  Start a Board

It isn't anti-motion sickness, it is altitude sickness. Not the same thing. Also, the app just predicts when it will occur, it doesn't do anything about it.

That would have a very limited and minimal impact on the non-military world. Unless people start building datacenters up high ;-)
Reply  |  Post Message  |  Messages List  |  Start a Board

As someone who has eaten her share of military-quality food, I promise, no one is lining up. Except maybe for the freeze-dried strawberries.
Reply  |  Post Message  |  Messages List  |  Start a Board

But anti motion-sickness software on a smartwatch could appeal to many people.
Reply  |  Post Message  |  Messages List  |  Start a Board

Not sure I see the rest of the world lining up for military-quality food.
Reply  |  Post Message  |  Messages List  |  Start a Board
Editors' Choice
Hot Topics