Internet video ad models are, to say the least, in a constant state of upheaval or trial and error, depending on whether you're a glass-half-full or glass-half-empty person. The Interactive Advertising Bureau announced new standard ad formats in early May, and several months ago, to much fanfare, Google/YouTube introduced an ad format called a Lower Third, where a translucent ad comes up and takes over the bottom part of the video for about 10 seconds while the video continues to play.

Actually, it covers only 20% of the screen, according to YouTube's Aaron Zamost. YouTube found extremely high abandonment rates with pre-roll video (essentially, a video- or TV-like commercial that plays before the video content runs). For the Lower Third ad, or 'in-video ad,' you can click through to the offer without leaving the player, Zamost said; from a viewer standpoint, it doesn't intrude heavily on the content. Zamost, like so many others, wouldn't talk about ad numbers.

The other type of advertising that's growing popular is just standard ad units around the player. Sometimes it's good to run contests and create interaction, Zamost said. Nearly everyone I talked to about advertising stressed the importance of context and relevance. Zamost went so far as to say 'advertising on the site is content on the site.' YouTube can target by age, gender, location, time of day, and category of content, making its ads interactive, relevant, and engaging.

Joost CEO Mike Volpi found that there is a strong click-through on ads if there are regular ads around the viewing experience that appear in concert with a 30-second video ad spot. The content companies run fewer ads on the Web, and Volpi, for one, claims the ad rates are much higher than TV (Joost's CPM, or cost per thousand, ranges from $40 to $60 vs. TV's $20 to $30). A 1% click-through rate is often seen as fantastic in the media business, and Volpi said he's getting north of 2%, sometimes up to 6%.

Because you know the audience that's watching, you can target an ad and 'the actionability of that is enormous. For the first time on the Internet, you can blend a brand ad and an interactive component, and you can do that because of the video,' according to Volpi. After all, on the Web, you know exactly how many are watching, and you know a lot more about them. 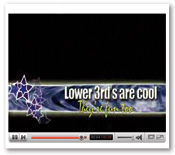 (click image for larger view)
If time and space independence are the big drivers of Internet TV watching, interactive engagement will be the true currency with which to make big money. The quest for user engagement is the Holy Grail on the Internet, anyway, but combining that with a sustained viewing experience will be a major turning point. The cult following around Revision3's programs is just one element. How the viewers comment on or blog around the shows is evidence of their engagement, and thus attention when an advertisement might play.

Joost, from day one, built interactivity into its player experience, allowing for interaction among viewers. When people discover they are starting a show at the same time, they share information or have online viewing parties. For March Madness, Volpi said, there was a lot of 'smack' talking. All of this enhances the experience, he believes. Content owners are able to do polling and quizzing. The show just becomes the hook for everything else.